Rashaan Salaam, who won the Heisman Trophy in 1994, has died, a family spokesperson said Tuesday.

Salaam's body was found in a parking lot at Eben G. Fine Park and 911 was called just before 9 p.m. on Monday, according to Boulder Police spokesperson Shannon Cordingly. The park is less than two miles from Folsom Field, where Salaam starred as a running back for the University of Colorado.

Cordingly said there were no signs of foul play and an autopsy to determine the cause of death will be performed by the Boulder County Coroner's Office. Police told Salaam's mother, Khalada, they suspect suicide after finding a note. She told USA Today Sports, "They said they found a note and would share that with us when we get there."

"The Buff Family has lost an outstanding young man and a great Buff today," Colorado athletic director Rick George said Tuesday. "We are heartbroken for Rashaan and his family, and our thoughts and prayers are with them at this very difficult time."

The football team at Colorado tweeted about Salaam's death.

The Chicago Bears, who picked Salaam in the first round (No. 21 overall) of the 1995 draft, tweeted, "Our thoughts are with his family."

Denver Broncos director of player personnel Matt Russell, who was Salaam's teammate at Colorado from 1992 to '94, released this statement:

"Rashaan was as dynamic off the field as he was on the field as a player. He was a fiercely loyal friend, someone who was always in your corner and had your back. He was the ultimate teammate and supportive of everyone in his locker room. If there was ever a guy who was going to get a personal foul for protecting someone on his team, Rashaan was that guy."

"Rashaan was the ultimate Buffalo and was so proud to be called a 'Colorado Buffalo.' We were part of the same recruiting class, what we called 'nine deuce,' the Class of 1992. On the field, Rashaan was the definition of a winner. It was important to him. He practiced hard, he played hard and he made our teams better. Rashaan and I laughed a lot after practices because we had so many battles and fights. Even when we last saw each other a few years ago at the CU Hall of Fame induction, we still shared those great memories and had a lot of laughs from our time together at Colorado. 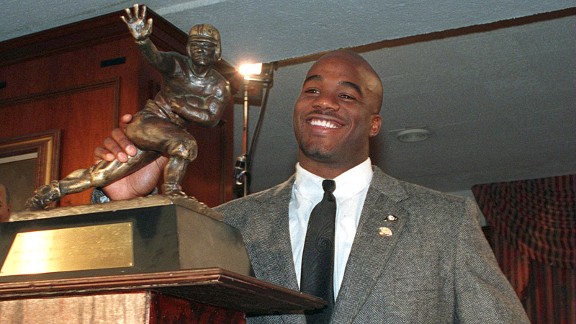 • Heisman Trophy winner in 1994 (only Heisman winner in Colorado history)

"My heart goes out to Rashaan's mother and his family. They have a lot to be proud of with the person that Rashaan was, the way he treated people and the friend he was to everyone he came across. He will be missed by so many, and I extend my deepest sympathies to Rashaan's many friends and family."

Salaam won the Heisman Trophy in 1994, a season in which the Buffaloes finished No. 3 in the final Associated Press poll. He rushed for 2,055 and 24 touchdowns that season and also won the Walter Camp and Doak Walker awards.

Salaam was plagued by injuries and fumbles (he lost 14 in 31 games for the Bears). He acknowledged in 1999 that marijuana use contributed to his problems in Chicago. "It probably had me out there lackadaisical instead of going out there 100 percent," he told ESPN in an interview then.

"Everybody thinks getting high is cool, you can let it go when you want to let it go," he said. "But it's just as potent as cocaine."

Salaam broke his leg in the third game of the 1997 season, after committing two costly fumbles, and said that injury increased his addiction.

Salaam told ESPN he had informed the Bears about his problem early in 1998 and entered a rehabilitation program, but the Bears later cut him, and he was out of football for a season.

He signed as a free agent with the Oakland Raiders in 1999, but he was cut. He landed in Cleveland later that year and played two games for the Browns. He also was a member of the Green Bay Packers' practice squad.

Salaam also briefly played for the XFL Memphis Maniax in 2001.

Salaam launched a comeback attempt in 2002 and was signed by the San Francisco 49ers in 2003, but he was released before the season. He was signed by the CFL's Toronto Argonauts in February 2004 but was suspended in May, ending his professional career.