Sources told ESPN that Strong has agreed to a five-year deal with the Bulls. 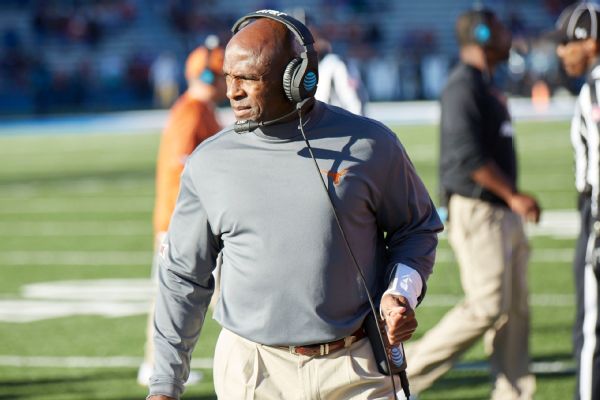 • Twice shared Big East Coach of the Year award while at Louisville (2010, shared with Randy Edsall; 2012, shared with Kyle Flood)

• Defensive coordinator at Florida from 2003-09

• Has also been an assistant at Notre Dame, Ole Miss, Southern Illinois and Texas A&M

"Charlie is a tremendous leader and mentor for our student-athletes and a widely-respected coach with a résumé full of achievements at the highest levels of college football," USF athletic director Mark Harlan said in a statement. "He combines a drive to win with great integrity and deep, long-standing connections in the state of Florida. The future of USF football is very bright under his direction."

Strong met with South Florida officials Friday and Saturday after having preliminary conversations by phone with school officials earlier in the week. He will replace Willie Taggart, who left to take the head-coaching job at Oregon. Strong was also being pursued as a defensive coordinator by several Power 5 schools around the country.

"I am humbled that we have a shared commitment to take this university and this football program to even greater heights," Strong said in a statement. "Some of the best football talent in the country is right here in the Bay Area and throughout the state of Florida, and I feel blessed to have the opportunity to work with the young men in the USF football program and build on the strong foundation already in place."

Strong will become only the fourth head coach in USF's 20-year football history. He has strong ties in Florida and has recruited the state extensively. He was the defensive coordinator at Florida under Urban Meyer when the Gators won national championships in 2006 and 2008 and had three previous stints on the Gators' staff, including working under Steve Spurrier in the early 1990s.

In the two NFL drafts after Strong left Louisville for Texas, the Cardinals had eight players selected in the 2014 draft and 10 players taken in the 2015 draft, including four first-rounders. One of Strong's top players at Louisville was current Vikings quarterback Teddy Bridgewater, whom Strong recruited out of Miami.

Strong was offered the USF job during his meeting with school officials in Tampa, but he returned home to Austin, Texas, to discuss it with his family before making his decision Sunday, a source said.

Strong and Taggart had discussions about the USF job over the weekend, a source said. Taggart had interest in hiring Strong as a defensive coordinator, sources said.

This will be Strong's fifth stint coaching in the Sunshine State. At Florida, Strong was a graduate assistant (1983-84), linebackers coach (1988-89), defensive line coach/assistant head coach (1991-94) and defensive coordinator/linebackers coach (2003-09). He also has been an assistant at Texas A&M, Southern Illinois, Ole Miss, Notre Dame and South Carolina.

Strong is the first head coach in USF's history with previous head-coaching experience at a Power 5 school.

If Strong remains at USF four years, it will make for an intriguing season opener in 2020, when the Bulls visit Texas on Sept. 5.

Information from ESPN's Brett McMurphy was used in this report.