The regular season is over, and every college football honor has been distributed.

You've waited patiently, and it's time to unveil ESPN's All-America team. There were some easy decisions: Heisman Trophy winner Baker Mayfield at quarterback, Butkus Award winner Roquan Smith anchoring the linebackers and Bradley Chubb on the edge of the defensive line. But there were some tough calls as well. 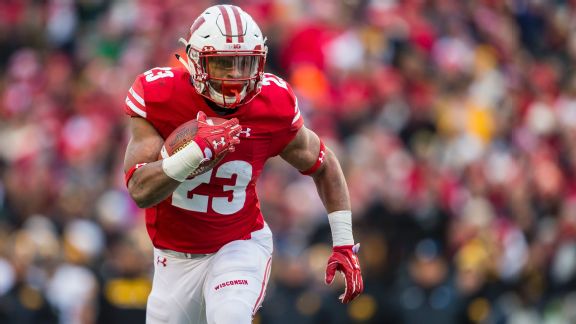 Here are your 2017 ESPN All-Americans:

One of the most statistically dominant players in college football history, Mayfield saved his best for last. The Heisman Trophy winner passed for a career-high 4,340 yards with 41 touchdowns and only five interceptions. He leads the nation in completion rate (71 percent), and his 203.8 passer rating would break the FBS record he set last season. Mayfield had three or more touchdown passes in 10 games, including each of the last six, while throwing more than one interception only once.

Beginning with a 62-yard touchdown on Stanford's first play of the season, Love dazzled with big plays and incredible speed. #SaturdayNightLove became a must-see, as Love set an FBS record with 12 rushes of 50 yards or longer and led Power 5 backs in runs longer than 20, 30, 40 and 50 yards. He gained even more respect late in the season while playing through an ankle injury. Although Love finished in a familiar spot for Stanford Heisman hopefuls (second), he needs only 47 yards to break Christian McCaffrey's single-season team rushing record.

Like other Group of 5 superstars, Penny often was overlooked nationally despite spectacular play all season. He followed 2,000-yard rusher Donnel Pumphrey with his own 2,000-yard season to lead the FBS. Penny became the first player in a decade to record four consecutive 200-yard rushing games, and he shined as a return specialist, recording two kick return touchdowns and a punt return score to lead the nation in all-purpose yards (2,698).

Washington headlined the nation's most exciting receiving corps while finishing a record-setting career alongside quarterback Mason Rudolph in Stillwater. The senior eclipsed 100 yards and averaged more than 18 yards per reception in eight games while recording at least one 30-yard play in nine games. Although Oklahoma State had no shortage of options at receiver, Washington rose above the rest and won the Biletnikoff Award as the nation's top wideout.

Other than Rudolph and Washington, there might not have been a more exciting passing connection this fall than Miller and Memphis quarterback Riley Ferguson. The former walk-on recorded his second consecutive season of more than 1,400 yards and more than 90 catches while shining brightest in spotlight games against UCLA (nine catches, 185 yards, two touchdowns) and UCF in the AAC title game (14 catches, 195 yards, four touchdowns).

Although Mayfield lost several of his targets from 2016, Andrews remained and turned in an incredible season with 906 receiving yards, leading all FBS tight ends. OU's first Mackey Award winner averaged 15.6 yards per reception with eight touchdowns. Andrews had four or more receptions in nine contests, including seven in the Big 12 championship win over TCU.

An All-American in 2016 at guard, Price seamlessly transitioned to center this season, much like Pat Elflein did the year before. The Rimington Trophy winner anchored an Ohio State offensive line that created room for J.K. Dobbins, Mike Weber, J.T. Barrett and others. The Big Ten's offensive lineman of the year is Ohio State's iron man, who set the team record with 54 consecutive starts.

Notre Dame doubled down on the run game this season, and Nelson is the biggest reason for that. Along with tackle Mike McGlinchey, Nelson solidified a line that bullied opponents during the first two months of the season. Nelson could be the first guard off the board in next year's NFL draft, and the Outland Trophy finalist helped the Irish rank seventh nationally in rushing offense (279.1 YPG).

It seemed unlikely, if not impossible, that any Auburn offensive lineman would earn national honors after Clemson recorded 11 sacks and held Auburn to less than a yard per rush in a Week 2 win. But Auburn turned things around dramatically, and Smith, who won the SEC's Jacobs Blocking Trophy, was key in the revival. Smith has been a mainstay for Auburn, starting 40 consecutive games.

A mainstay on Clemson's line since his arrival, Hyatt helped the Tigers achieve remarkable offensive balance this season while utilizing a multipronged run game. He protected quarterback Kelly Bryant's blind side and recorded 28 knockdowns in 722 snaps during the regular season. The first-team All-ACC selection and winner of the ACC's Jacobs Blocking Trophy has started 41 of 42 games during his three seasons at Clemson.

The domination began early and never really let up, as No. 9 caused havoc all season for opposing offenses. Chubb ranks second nationally in tackles for loss (25) while recording eight sacks, three forced fumbles, nine quarterback hurries and two pass breakups. Offensive linemen had no answer for Chubb, who claimed the Ted Hendricks Award as the nation's top end and was an easy choice for our team.

Houston didn't attract the national attention it had a year ago, but Oliver continued to impact games. He racked up 69 tackles, a staggering number for a nose tackle, and led Houston in tackles for loss (14.5), sacks (5.5), quarterback hurries (7), forced fumbles (2) and blocked kicks (1). Oliver ended the regular season with a career-high 14 tackles, including 3.5 for loss, against Navy before becoming the first sophomore to win the Outland Trophy as the nation's top interior lineman.

From the Florida opener on, Hurst established himself as the most disruptive lineman in the Big Ten and one of the best in the country. Big Ten coaches raved about his fast-twitch ability to make plays. Hurst had 59 tackles, including 13.5 for loss and five sacks, to go with two quarterback hurries, a forced fumble and a blocked kick. He could be a top-10 pick in next spring's NFL draft.

One of the more unique players in recent memory, Mata'afa starred at defensive tackle despite weighing just 252 pounds (according to WSU coaches, he's more like 245). A Herculean performance this season meant leading the Pac-12 in both tackles for loss (21.5) and sacks (9.5), while adding two forced fumbles and a fumble recovery. Mata'afa started every game for Alex Grinch's defense and recorded multiple tackles for loss in eight contests.

Early this season, opposing coaches began calling Smith the 2017 version of Reuben Foster, the Alabama linebacker who captured the Butkus Award last fall. Smith would go on to capture the Butkus after leading the nation's fastest linebacker group, piling up 113 tackles (44 more than any other Bulldog), including 10.5 for loss and 5.5 sacks. The junior leads Georgia with 17 quarterback hurries and added two fumble recoveries and a forced fumble.

Jewell's omission from the Butkus Award finalists lists remains baffling, but the Iowa star gets his due here. Despite missing one game to injury, he leads the Big Ten and ranks fourth nationally with 125 tackles, making this his third straight season of at least 120 stops. Jewell also leads Iowa in tackles for loss (13.5) while ranking second in pass breakups (11). He intercepted two passes and had a forced fumble and a fumble recovery. The Lott IMPACT Trophy winner is one of the nation's most consistently productive and elite players.

It took a collective effort for Wisconsin to become the nation's No. 1 defense, but Edwards consistently stood out as the leader. He tied for the team lead with four interceptions, returning one for a touchdown, and recording 75 tackles, including 11 for loss. The Butkus Award finalist broke up seven passes and recorded multiple tackles for loss in wins over Florida Atlantic, Michigan and Minnesota.

Iowa went 7-5, but few players had more impact on the playoff race than Jackson, who intercepted J.T. Barrett three times (two of the picks set up Iowa touchdowns) in the Hawkeyes' stunning win over Ohio State. Jackson made plays throughout the season, leading the Big Ten and tying for the national lead with seven interceptions. He also had 19 pass breakups, a forced fumble and a blocked kick. Jackson was named the Big Ten's defensive back of the year and a finalist for the Jim Thorpe Award.

Indiana picked on Ward during the season opener, throwing in his direction 18 times before he picked off a pass on the final attempt. By the end of the season, opponents were much more cautious to attack the Buckeyes junior, who led the team with 13 pass breakups while adding a huge punt block against Penn State during Ohio State's rally. He also blocked an extra-point attempt in Ohio State's win over Michigan, as he continued his special-teams excellence from 2016. Ward earned first-team All-Big Ten honors and on Monday was named a first-team AP All-American.

Considered by some to be the nation's most complete player, Fitzpatrick met lofty expectations and helped a largely revamped Alabama defense get back to the playoff. He became the first Alabama player during the Nick Saban era to win the Thorpe Award after recording 52 tackles, seven pass breakups, an interception, a forced fumble and a blocked kick. Fitzpatrick became just the third player to win the Thorpe and the Chuck Bednarik national defensive player of the year awards in the same season.

The Longhorns' defense provided the highlight plays this season, and Elliott delivered his share with six interceptions, including five during an incredible three-game stretch. He became the first Texas player since 1947 to record two interceptions in back-to-back games and the first since Earl Thomas in 2009 to record picks in three consecutive contests. A Thorpe Award finalist, Elliott also led the team in forced fumbles (3) and finished second in tackles for loss (8.5).

Although Utah's streak of Ray Guy Award winners ended at three seasons, the nation's premier special-teams outfit produced its first Lou Groza Award winner in Gay, a soccer player at Utah Valley University who joined the Utes this season. Gay led the nation with 27 field goals, including five from 50 yards or longer and two 56-yarders, the longest makes by any FBS kicker this season. Gay converted 18 attempts from 30 yards or longer, also the most in the FBS.

The Longhorns' first Ray Guy Award winner was a fairly easy choice. He consistently showed leg strength, leading the FBS in net yards per punt (44.7) and putting himself on pace to break his school punting average record (48.4 YPP). Dickson also had 32 punts downed inside the opponents' 20-yard line and 14 inside the 10. Only 15 of his 73 punts traveled fewer than 40 yards, and of those, seven were fair caught inside the 10-yard line. Only 17 of Dickson's punts were returned.

The September Heisman winner couldn't sustain his early momentum but continued to contribute in other ways, whether as a receiver or a return man. He led the Big Ten and ranked second in the FBS in all-purpose yards (179.5 YPG) while ranking 10th in kick return average (28.4 YPR) with two return touchdowns. Barkley won the Hornung Award as the nation's most versatile player and collected Big Ten honors for top offensive player, top running back and top return man. He had 426 kick return yards to go with 47 receptions for 594 yards and 1,134 rush yards.