COLUMBUS, Ohio -- Investigators working on behalf of Ohio State said Wednesday night they believe Urban Meyer did not deliberately lie to the public when discussing his knowledge about former assistant coach Zach Smith's past at Big Ten media days in July. However, a written 23-page summary of the findings released by the university late Wednesday night shows they had reasons to doubt that the coach was being completely forthcoming during their investigation.

The investigators said they believe that Meyer and his wife, Shelley, communicated in some way about concerns that Courtney Smith, the ex-wife of Zach Smith, raised to Shelley Meyer in text messages in 2015. Urban Meyer told investigators during interviews this month and told reporters Wednesday night that he had no knowledge of those messages. 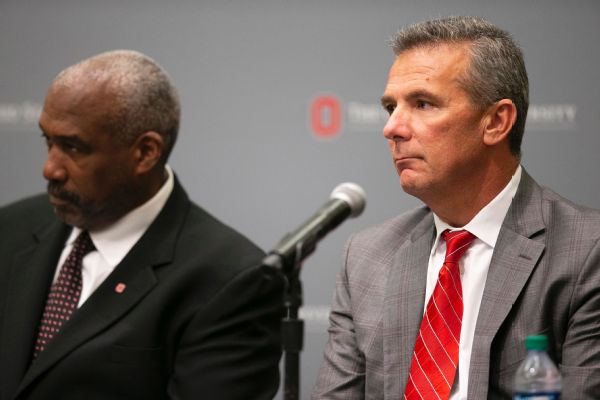 Investigators also found that upon learning about accusations made by Courtney Smith in an Aug. 1 report from college football reporter Brett McMurphy, Meyer and a fellow football staffer discussed how to adjust the settings on Meyer's phone so that text messages more than a year old would be deleted. When investigators examined Meyer's phone, they did not find any message more than a year old but said they were unable to tell when Meyer adjusted the settings on his phone to get rid of older messages.

Meyer denied knowing anything about a 2015 incident when he was asked at Big Ten media days on July 24 if he knew of any other domestic-related issues involving Zach Smith during their time together at Ohio State.

Ohio State athletic director Gene Smith explicitly told Meyer to acknowledge what he knew about the 2015 incident in a text message before Meyer spoke to reporters. Meyer acknowledged receiving that message, according to the investigators' report.

"While those denials were plainly not accurate, Coach Meyer did not, in our view, deliberately lie," lead investigator Mary Jo White said. "... Coach Meyer impressed us with his sincere commitment to the 'respect for women' core value that he espouses and tries to instill in his players."

Those details, along with many others that reveal a long pattern of Zach Smith's troubling behavior going overlooked by Meyer and Gene Smith, were made public in the investigation's findings. That report was not shared with reporters prior to Urban Meyer, Gene Smith and university president Michael Drake taking questions Wednesday night.

Among other items detailed in that report are:

• Urban Meyer told investigators that Zach and Courtney Smith met with him in his office at Florida in 2009, and they told him Zach's arrest for aggravated battery on a pregnant female had been based off incorrect information Courtney provided to police. Courtney Smith denied meeting with Meyer or recanting any of her allegations; Zach Smith also recalled that only he met with Meyer. Investigators found that it's likely only Zach Smith met with Meyer, and that both Urban and Shelley Meyer believed Courtney Smith "was not entirely truthful when she called 911 to have Zach arrested."

Urban Meyer denied knowing about the text messages Courtney Smith sent to his wife in 2015, but the independent investigators concluded that "given the closeness of their relationship and Shelley's concerns, we believe it is likely that Shelley and Urban Meyer had at least some communication about these allegations in 2015 and were concerned about them, although both had doubts about the credibility of Courtney's claims ..."

• Meyer told investigators he had no memory of the 2015 investigation of Zach Smith when he appeared at Big Ten media days on July 24 in Chicago. He said he focused his responses solely on an accusation that Zach Smith was arrested on a felony charge in 2015, which proved to be erroneous. But in a text message chain obtained by investigators, Gene Smith advised Meyer to acknowledge he knew about two legal situations involving Zach Smith in 2009 and 2015. Meyer acknowledged receiving the text.

When repeatedly asked about the 2015 investigation of Zach Smith, Meyer denied any knowledge of the situation, saying, "I don't know who creates a story like that." Both Gene Smith and football operations director Brian Voltolini, surprised by Meyer's comments in Chicago, later informed Meyer that he was, in fact, aware of the 2015 investigation into domestic violence allegations against Zach Smith.

Investigators acknowledged that Urban Meyer was affected by the firing of Zach Smith, as well as the erroneous report about Smith's felony arrest in 2015. Investigators also learned Meyer "sometimes had significant memory issues in other situations where he had prior extensive knowledge of events" and that the coach has periodically taken medicine that "can negatively impair his memory, concentration, and focus."

• The independent investigators also discovered that Urban Meyer had reprimanded Zach Smith in 2014 after Smith allegedly spent about $600 of his own money at a strip club in Florida during a recruiting trip, but Meyer did not report the incident to Gene Smith or OSU's compliance department.

The report said at least one other OSU coach and one or more high school coaches were with Smith at the strip club. Meyer warned Smith that he'd be fired if it happened again, and Meyer revised the 2014 coaches manual to include a morality clause, which instructed staff to "[a]void strip clubs or venues that would embarrass The Ohio State University." Meyer also prohibited "pornography ... on any university issued computer, phone, iPad, etc."

The investigators reported this information to the Office of University Compliance and Integrity and the Athletic Compliance Office to investigate whether the conduct violated NCAA rules.

• After Courtney and Zach Smith were formally divorced on Sept. 2, 2016, Zach Smith's "job performance suffered, and he was regularly late to practice and workouts," according to the report. Smith also failed to appear at scheduled recruiting visits at various high schools, despite reporting that he had.

"Zach Smith recalls that Meyer warned him that if he continued to be late and otherwise unreliable, he would be fired," the report said.

Gene Smith recommended replacing Zach Smith at the time, but Meyer decided not to do so, the report said. Smith received only a 3 percent raise in February 2016, by far the smallest he had received for any year he was on staff and the smallest for any full-time assistant coach that year.

During and after the divorce proceedings, according to the report, Zach Smith was engaged in a sexual relationship with a secretary on the football staff; took sexually explicit photographs of himself in the OSU football facilities and other locations, including the White House during an April 2015 team visit; and had sex-related toys delivered to him at the OSU athletics facilities.

• On Aug. 1, after a published report indicated that Urban and Shelley Meyer were aware of Courtney Smith's allegations of abuse and a police investigation in 2015, OSU chief of football operations Brian Voltolini approached Meyer on the practice field and advised him that it was a "bad article." The summary report claims the men "specifically discussed how to adjust the settings on Meyer's phone so that text messages older than one year would be deleted."

"We cannot determine, however, whether Coach Meyer's phone was set to retain messages only for one year in response to the August 1st media report or at some earlier time. It is nonetheless concerning that his first reaction to a negative media piece exposing his knowledge of the 2015-2016 law enforcement investigation was to worry about the media getting access to information and discussing how to delete messages older than a year."

The independent investigators also wrote that OSU personnel failed to adequately respond to an open-records request from the OSU school newspaper The Lantern, which sought communication between Urban Meyer and Zach Smith in 2015 and 2018. Julie Vannatta, senior associate general counsel at OSU, emailed Gene Smith and senior athletics director Diana Sabau and instructed them to retrieve responsive emails and texts from Urban Meyer's phone.

"Although all of these individuals were aware of the requests -- and indeed both AD Smith and Sabau responded that they had no documents on their end -- no one appears to have actually checked Coach Meyer's phone or even approached him about the requests," the report said.

• Meyer acknowledged Wednesday that his relationship with former Ohio State coach Earle Bruce, Zach Smith's grandfather, impacted how he handled Smith, saying, "I followed my heart and not my head. I gave Zach Smith the benefit of the doubt."

Investigators called Smith a "blind spot" for Meyer, writing that Meyer's "cherished relationship with Earle Bruce may also have diminished his ability to clearly process and assess the severity of Zach's problems or to appropriately discipline him, despite numerous red flags raised by Zach's behavior over the years."