"After 40 years of coaching, it's time to take a break," Johnson, who is wrapping up his 11th season with the Yellow Jackets, said in a statement. "My family has sacrificed a lot over the years. I want to watch my daughter perform [as a professional opera singer] and do some things with my wife that we've never had a chance to do.

"It's been a great run for the last 11 years here on The Flats. I'm proud of what we've accomplished and am looking forward to having the chance to coach this team one last time at our bowl game next month."

Johnson, 61, is fourth all-time at Georgia Tech with an 82-59 mark, and has a career coaching record of 189-98 over 22 seasons. He guided the Yellow Jackets to the ACC championship in 2009, and he finished first or second in the Coastal Division in seven of his 11 seasons.

The Yellow Jackets lost to rival Georgia 45-21 last Saturday to finish 7-5 overall. They await a bowl assignment, which would be Johnson's ninth at Georgia Tech.

"I've been thinking about it for a while," Johnson told WXIA-TV on Wednesday. "I'm not sure I'm done coaching, but I need a break. I'm going to take some time off with the family and decide if I like it. If it works, it'll be great. If it doesn't, I'll resurface somewhere else. 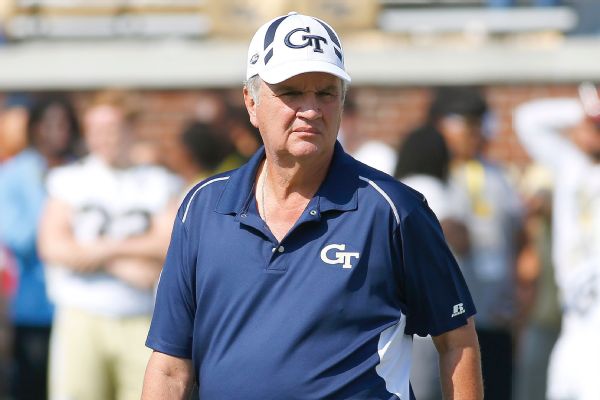 "I was saddened when Coach Johnson informed me that he was going to step down as our head coach," Georgia Tech athletic director Todd Stansbury said in a statement. "Not only is he Georgia Tech's winningest head coach in more than 50 years but he is also an incredible mentor for the young men in our football program and has helped develop countless student-athletes that have gone on to great success after graduation."

Johnson is one of the few coaches in college football who still runs an option-centered offense with his flexbone spread. He ran the same system at Navy before taking the Georgia Tech job.

The Yellow Jackets lead the country in rushing this season and have been a fixture in the top 10 nationally in rushing each of the past 10 years. Since 2008, Georgia Tech has averaged 301.9 rushing yards per game -- second in FBS behind Navy (308.0).

The Yellow Jackets ran for 5,222 more yards than any other major conference team during Johnson's tenure. They also averaged only 13.0 passes per game -- only Army (9.5), Navy (10.0) and Air Force (12.9) attempted fewer passes during that same period.

Los Angeles Chargers offensive coordinator Ken Whisenhunt, who played at Georgia Tech, is expected to be a top candidate to succeed Johnson, according to sources. Clemson co-offensive coordinator Tony Elliott, Alabama offensive line coach and former Tech player Brent Key and Army coach Jeff Monken, who also runs the triple option, could be in the mix as well.

ESPN's Adam Rittenberg and Mark Schlabach and The Associated Press contributed to this report.