The past decade of college football was defined by Clemson's emergence as a national power. The Tigers slowly emerged under Dabo Swinney. They caught fire when quarterback Deshaun Watson was healthy. But Clemson did not officially become a giant until the team began to beat the best teams in the country.

On Thursday, ESPN (7 p.m. ET) will re-air Clemson's unforgettable 35-31 win against Alabama in the 2017 College Football Playoff National Championship game. It was the second of four Alabama-Clemson battles in the CFP and the one that might end up with the deepest legacy.

ESPN writers Dave Wilson and Bill Connelly look back at the Clemson-Bama series, as well as the best national title games of the CFP/BCS era, and discuss what makes a game a legitimate classic.

Besides Watson-to-Hunter Renfrow, what are your most lasting memories of the game?

Wilson: That it was the rare sequel that lived up to the original matchup a year before (Alabama's 45-40 win). It wasn't a game where you worried a team was going to make a mistake that doomed them. It was how good they both were. And Watson became a college football legend after getting hit, popping back up and leading Clemson to the title. He passed for 420 yards against the Tide in the process.

Connelly: My lasting memory is that 2017 was the first time I attended the American Football Coaches Association conference, which is timed to take place around the national title game. I would say at least 90% of the coaches in attendance were rooting for Clemson that Monday night. Even coaches get tired of the same team winning nearly every year, apparently. (The energy was not nearly as partisan two years later when Clemson won again.)

Beyond that, I simply remember thinking, "Man, Bama should have put this game away by now" countless times. Bo Scarbrough scored on two rampant runs in the first half but got hurt, and Alabama had a couple of drives stall in Clemson territory. They were holding Clemson defensively, but with Alabama up 17-7 late in the third quarter, it seemed like the Crimson Tide should be leading by about 21. Clemson then unleashed its offense and it became a track meet.

I also loved how so many key offensive players made huge plays late. Alabama's O.J. Howard caught a 24-yard pass to set up Jalen Hurts' 30-yard run. Mike Williams caught passes of 26 and 24 yards and drew a pass interference to set up the winning score. Jordan Leggett made a gorgeous catch with 14 seconds left. Hunter Renfrow Hunter Renfrow'd. Some games are remembered for classic individual performances; this was a collective job.

Wilson: There was (understandably) some national angst about two teams from the same part of the country playing close to home in Tampa -- in a rematch, no less. But I'll never forget walking out of the press box during the game for a while so I could get out in the stands and feel how exciting this one was. Restaurants were packed with fans doing cheers for both teams in the middle of dinner during the week, and to have it all build to that fourth quarter was electric. But maybe most memorably, I hustled down to the field when it was over and saw a very large, limber man do the splits right in front of me when Christian Wilkins hammed it up for the cameras. That's the kind of thing that sticks with you.

Twenty years from now, which Alabama-Clemson CFP game will have taken on the greatest resonance?

Connelly: It's probably this one because of the classic ending and the fact that Clemson had officially arrived as a national power. If Dabo Swinney continues to win big for a generation, this was the starting point.

I can make a case for the previous year's game too, though. Nick Saban hiring Lane Kiffin as his offensive coordinator in 2014 represented his attempt at offensive modernization, an acknowledgement that he needed to spread things out a bit more and become more tactically flexible. The Tide lost to Ohio State in the CFP semis that first year, but broke through the next year, handing Saban his first title with the new offense. (Never mind that the offense wasn't all that great.) So there's symbolism there.

Wilson: We've been #blessed with some of the best finishes ever during this period.

The Rivalry: Alabama vs. Clemson 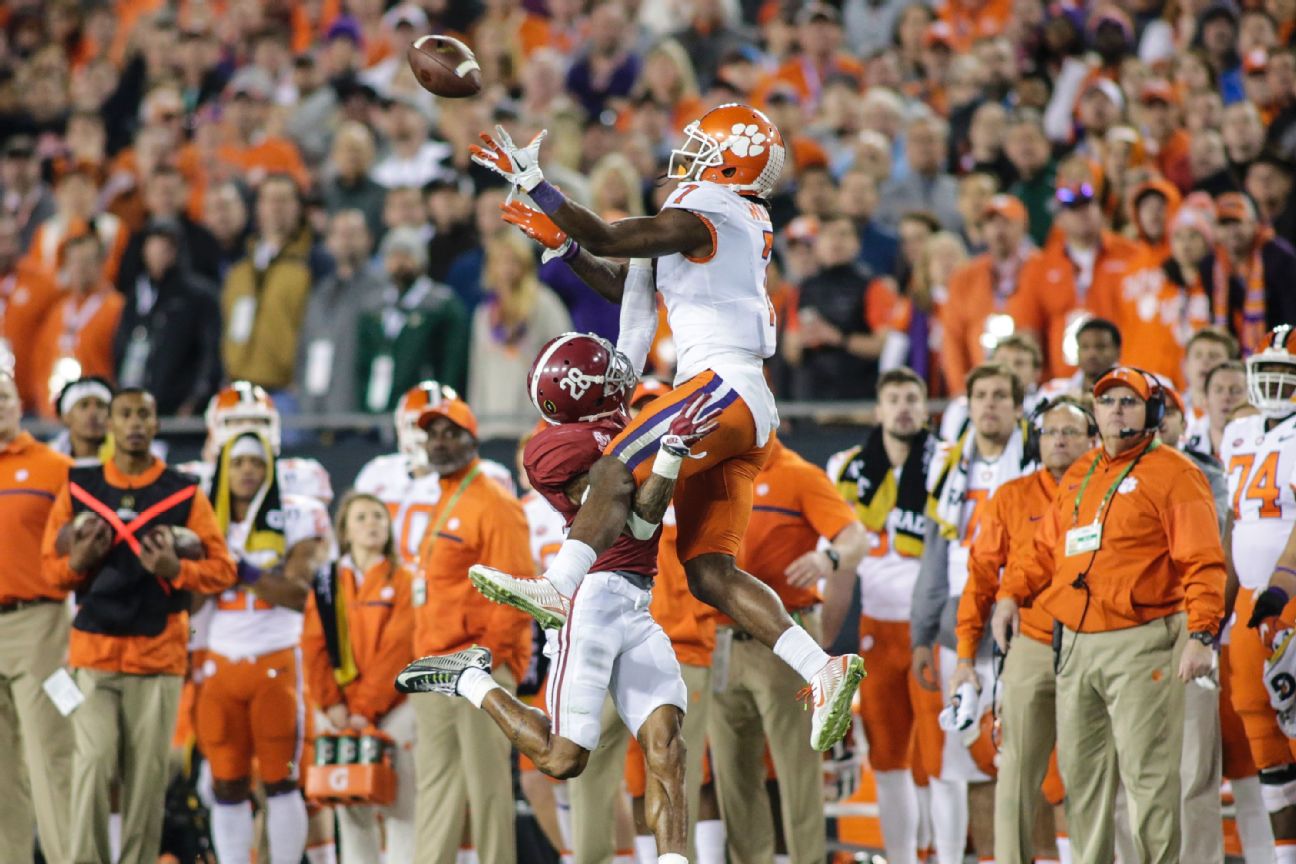 Connelly: I shouldn't have let you go first in this one -- now it's going to look like I'm copying.

What has been the most disappointing title game so far?

Connelly: We've had some blowouts and some duds, but the 2010 Alabama-Texas matchup was defined by who wasn't able to play. We talked for a month about Nick Saban's defense versus the Colt McCoy offense. But McCoy was lost for the game on the Longhorns' fifth snap, and Garrett Gilbert had to fill in. The simple fact that the Horns had the ball with three minutes left, down just three, tells you we could have been in store for a hell of a game. (We could also have been in store for an easy Texas win, to be honest.) But the truth is, the game was completely redefined five minutes in, and the game plans went out the window. That's no fun.