Dr. Jerry E. McGee enjoyed one of the most decorated careers in the history of college football officiating. From 1972 to 2009, he worked 404 games at the FBS level, including a pair of Rose Bowls, a pair of Army-Navy games and three games that determined the national championship, including his final game between Florida and Oklahoma.

He also raised two boys, my brother, Sam, and I. Now the three McGees have coauthored a book, "Sidelines and Bloodlines: A Father, His Sons, and Our Life in College Football," which is on sale now.

In the following excerpt, exclusive to ESPN.com and presented with permission from Triumph Books, the McGees provide insight into the question that they -- and every sports officiating family -- receive whenever football is played.

"Hey, what's that coach yelling at that ref?"

More About The Book 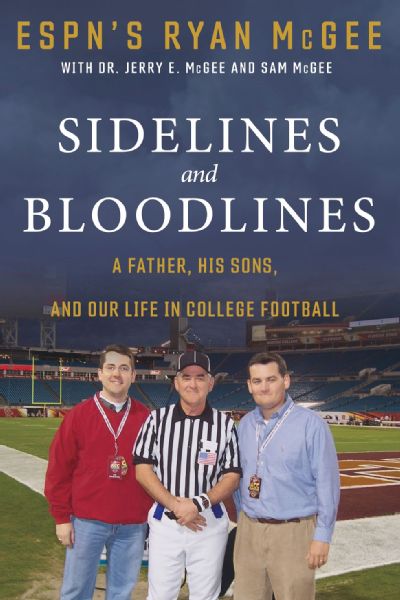 This excerpt is exclusive to ESPN.com, presented with permission from Triumph Books. For more information or to order a copy, please visit Triumph Books.

After three decades of officiating football in the ACC and Big East, my father, Dr. Jerry E. McGee, has an incredible collection of photographs on display at his home in Charlotte, North Carolina, images of him in action everywhere from the Orange Bowl and Rose Bowl to Death Valley and Notre Dame Stadium.

However, the best photos are of the angry coaches. I call it the Wall of Screaming.

There's Joe Morrison, the man who built South Carolina into something other than an also-ran, who introduced the Gamecocks' black jerseys and their "2001: A Space Odyssey" stadium entrance, on the sideline during the Clemson game of '84. "Old Dependable" is screaming, his jaw unhinged, and appears to be pointing directly at Dad, who appears to be totally ignoring the coach.

The caption that accompanied that photo in the Sunday morning paper read: "Coach Joe Morrison explains his point of view to a less than interested official."

I don't think he's even actually yelling at me, but the camera angle sure makes it look like he is, doesn't it? I don't know. Maybe he was. What I do remember about that game was that I had to get the South Carolina captains for the coin toss, but no one knew who the captains were because Morrison picked them game-by-game. They told me I needed to ask him, and they walked me down to a door under the stadium. I opened it, and there was Joe Morrison, sitting totally alone on a folding chair in the middle of an empty concrete room. There was one light bulb hanging right over him, like a spotlight, and the room was full of smoke. He was sitting there, basically in the dark, chain-smoking like crazy before the game.

The most notable photo on the Wall of Screaming was taken in Tuscaloosa, Alabama, on Oct. 6, 2006, when Duke visited Alabama. Crimson Tide head coach Mike Shula is standing at most two feet off the back of Dad's head, his mouth wide open and his hand extended to underline the point he's so angrily exclaiming. Once again, Dad seems to be purposely ignoring it, looking toward the scoreboard clock as he fills out his penalty card with the details of the foul that Shula is so unhappy about.

Alabama won that game 30-14, the third from last win of Shula's four-year Tuscaloosa tenure. Six weeks later, he was fired. The Tide replaced him with some guy named Nick Saban.

When I look at that picture, what I think about is the amount of pressure that these coaches are under. When Mike Shula was unloading on me that night, he probably already knew he was finished. It's a reminder that you never truly know what's going on with a coach behind closed doors.

The reality is that over 404 games of college football officiating, almost all of it on the sideline, I only remember a very few times when a coach truly just flipped out on me. And looking back, like Shula that night, there was almost always something else behind it.

Take, for instance, Jim Young. During Young's 17 years as head coach at Arizona, Purdue and Army, he was universally considered one of the truly good guys of college football. So Dad was shocked on Sept. 27, 1986, when Wake Forest traveled to West Point, and his experience on Young's sideline at Michie Stadium was a cacophony of cuss words. The Black Knights were favored in the game by a couple of touchdowns but instead were trailing the Demon Deacons early en route to a blowout upset loss.

There was bad call at the start of the game, a defensive pass interference flag on the other side of the field. Those officials were too far away to hear Young, so he aimed his anger at the field judge, the ref who was most easily at his disposal. He stalked Dad up and down the sideline, screaming over and over again, "You have already f---ed up this entire game!"

I think that football fans assume that an official is out there just looking for a reason to throw his penalty flag, but the good ones have the complete opposite approach. Typically, if a player draws an unsportsmanlike penalty, or even something like a holding, there's a really good chance the official has already warned them about it at least once. "Keep that up, and we're going to have to flag you."

Anyone who doesn't believe that needs to do what we have always done and really watch how a good sideline official reacts to a coach who has spent a ridiculous amount of time in the game screaming, yelling and complaining. The official will walk away from a coach like that. They will warm him directly. They will even go to other people on the sideline and say, "Hey, someone needs to calm him down before he draws an unsportsmanlike." If he keeps it up after that, there is going to be a penalty. Or if he breaks the golden rule.

Ah yes, the golden rule. When it comes to flagging a coach with a personal foul, the guideline is very simple. You unfurl the yellow napkin only when the rants have become personal. For example: "That's was the stupidest god damn call I've ever seen!" is OK. But "You are the stupidest god damn human being I have ever seen!" is not. If you need a more detailed illustration, please watch the film "Bull Durham" and the scene in which Crash Davis calls the umpire the one name he knows you can never call an umpire because he's trying to get thrown out of the game and perhaps get his teammates to finally become fired up and focused.

Jim Young kept railing, and it was getting worse. Dad went to the Army assistant coaches and asked them to tell their boss to cool off because he didn't want to flag the supposed nicest man in football. They told Dad no way. He was on his own.

The clock is ticking down to the end of the first half, and he is just getting louder and louder. I'm watching the clock thinking, "OK, we're going to be saved by the bell here." Then, with about 38 seconds remaining, Young leaned right into my ear and screamed, "You guys are just a bunch of god damn sons of b----es, aren't you?!" I threw my flag. Personal foul, 15 yards.

I went to the white hat, Bob Cooper, and he said, "What in the hell have you done? That's probably the nicest head coach in America."

Bob said, "Well, then give me that damn football ..." and he marked off the 15-yard penalty.

Nearly a decade later, Dad was back at Michie Stadium for a Rutgers-Army matchup as part of a Big East officiating crew. As that crew held their pregame meeting, in walked Jim Young, now retired as a football coach but still omnipresent in West Point as a living legend. Young introduced himself to the room.

When I said my name, he said, "You know, there used to be a McGee who officiated in the ACC." I told him, "Yeah, I know. It was me." He said, "You are the only official who ever flagged me during a game."

I asked him, "Well, did you deserve it?" And Coach Young said, "Oh, hell yes. The only mistake you made was that you didn't flag me five minutes earlier. Sorry about that. I was just trying to do something to wake my team up."

For Dad, the most notorious case of "pressurized coach + dealing with problems no one knows about + losing a game you shouldn't = sideline explosion" took place on Halloween 1996. Boston College was visiting Pitt for a coveted Thursday night national showcase game on ESPN. The 4-4 Eagles were 11-point favorites over the scuffling 2-6 Panthers. But BC never got into gear and lost an ugly contest 20-13.