Hear the name Arch Manning and it's easy to skip past a high school sophomore and focus on the family legacy.

See him on the Isidore Newman School football field playing quarterback under the lights and it's sure to bring thoughts of Archie, Peyton, Eli and Cooper Manning -- his grandfather, uncles and father -- who all made the game look so easy, the latter three having played on the same field. 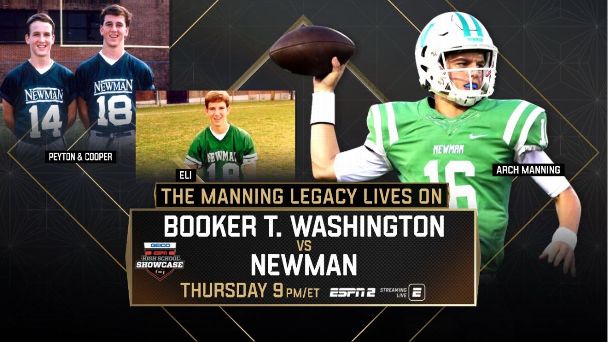 Top QB prospect Arch Manning, the nephew of Peyton and Eli, will take the field Thursday at 9 p.m. ET when Isidore Newman takes on KIPP Booker T. Washington on ESPN2. How to watch »

"Arch is his own entity," Isidore Newman football coach Nelson Stewart said. "That's one thing we tell him is, you be yourself. What a great resource he has with his uncles, grandfather and dad that can work with him and help, but as a sophomore, I would hope no one would put that label on him because there's so much growth still to happen. We let Arch be Arch, let him be a sophomore."

The family kept him out of the spotlight and away from media interviews his freshman season, and he has started doing a few this season, though he declined to be interviewed for this story. His coaches and family are trying to keep the focus on the team.

Letting Arch be Arch is an easy task for Stewart and the rest of the coaches, because while they don't want to make any comparisons, he is already one of the best quarterbacks in the country and getting better with every rep. He's 6-foot-3, 195 pounds, and through the first two games of the season, Manning has completed 27 of 37 passes for 463 yards and six touchdowns, with only one interception.

Football fans will be able to make their own comparisons and judgments when Isidore Newman plays KIPP Booker T. Washington on Thursday at 9 p.m. ET on ESPN2.

Stewart has been the head coach at Newman, in New Orleans, for 15 years. He graduated from the school in 1995 and played with Peyton and Cooper, then a wide receiver, in high school. He has been around Arch his entire life and has been able to see firsthand the person he has become.

Comparing him to anyone in his family wouldn't be fair -- not just because he doesn't ask for that comparison but also because he is a blend of a little bit of everybody. His ability to move in the pocket is reminiscent of his grandfather's, and there's some athleticism from Cooper and a work ethic similar to Peyton's.

"He's not just one thing and he's not a system quarterback," Stewart said. "If you need him to run zone reads, he can do it. You see him scramble and can find someone in the back of the end zone, throw it 25 yards on a rope, and he can just spot-throw the points when he's moving around.

"That's where the special part of it comes, that he just has the innate ability that most people his age don't have."

During this pandemic, Stewart and Manning have spent hours on Zoom calls going over every single play in the team's playbook, meticulously dissecting film and reviewing notes on what the sophomore can improve upon.

Manning also worked with the team's other star player, wide receiver A.J. Johnson, an ESPN Junior 300 prospect in the 2022 class, building chemistry and timing for this season.

"[Johnson] has gotten really close with Arch, and I think the pandemic probably brought them closer," Stewart said. "A lot of kids, when it all shut down, they kept working and kept going. They even came back with a couple different patterns they worked up with one another."

That work paid off when Johnson had his first catch for Newman this season, a touchdown bomb in the first game.

Johnson transferred to Newman prior to last season and had to sit out the year under transfer rules. He has already garnered a ton of attention with very little film, which Stewart says is a testament to his character, work ethic and ability.

As with Manning, Stewart is trying not to make any comparisons with Johnson. The school hasn't just had some famous quarterbacks on its field -- NFL wide receiver Odell Beckham Jr. also attended Newman.

"[Johnson] is a violent blocker and he can knock the top off coverage; I think that's the biggest thing," Stewart said. "I was fortunate years ago to have Odell, and I remember the things he could do. Some of those things you see shadows of with the burst, high pointing the ball, the ability to knock the coverage off. I think those are fair comparisons from those standpoints.

"Where Odell was so unique, throwing the ball 60 yards with his left hand, he was a generational athlete."

Having a talented wide receiver can be a young quarterback's best friend, and Johnson and Manning have built great chemistry in a short amount of time.

Stewart is quick to point out, though, that both are young and still raw in what they know, with a ton of growth potential.

"Arch is his own entity. That's one thing we tell him is, you be yourself. What a great resource he has with his uncles, grandfather and dad that can work with him and help, but as a sophomore, I would hope no one would put that label on him because there's so much growth still to happen." Isidore Newman football coach Nelson Stewart

For Manning, there are resources most young quarterbacks don't have access to. But his humility and competitive fire are incomparable.

He wants to do it with his own name. Not as Peyton's nephew or Archie's grandson. As Arch.

"The Manning name is the first thing you see when you walk through the gates; he's No. 16 and he's a quarterback," Stewart said. "But he's his own individual. That's the magic of him, that he keeps his head down, always gives credit to his teammates, and everything is done quietly with him because that's who he is." -- Tom VanHaaren

Playing QB with the name Manning on his back is going to draw a great deal of attention. Given that he's just starting his sophomore season, we need to be reminded that he is still young with a lot of high school football ahead.

Manning should be able to develop his own identity, and he's already showing he's a different type of player than his famous uncles. One of the aspects of Arch's game that immediately jumps out is his athleticism. He might not be labeled a true dual threat, but he is a mobile quarterback with the ability to extend plays and create second-chance passing opportunities. He is also athletic enough to tuck the ball and generate big plays with his legs.

If the Manning name is going to carry great expectations, Arch is demonstrating the tools to meet them. He displays excellent poise and feel for the position beyond his years. He also has a quick release and throws a pretty deep ball. The early numbers and film back up the promise he has displayed, and as he continues to grow as a player both physically and mentally, he can become a prospect with the tools to be one of the most sought-after and elite signal-callers in the ESPN 300 era. -- Craig Haubert