TUSCALOOSA, Ala. -- Alabama linebacker Will Anderson Jr. is used to starting fast.

According to Dr. Matt Rhea, the Crimson Tide's director of sports science, Anderson has reached 20 mph on GPS while running in practice. Even more impressive, Anderson is the fastest player on the team going from a standstill to five yards, at 10.7 mph. That's nearly as quick out of the gates as former Crimson Tide receiver Jaylen Waddle, who was clocked at 11.2 mph at five yards last year.

Anderson, 6 feet, 4 inches tall and weighing 245 pounds, is about 65 pounds heavier than Waddle, who was the No. 6 pick by the Miami Dolphins in this spring's NFL draft.

"Waddle was the fastest at five yards that I have ever seen," Rhea said. "But at 245 pounds, it's unbelievable how fast [Anderson] gets off the start." 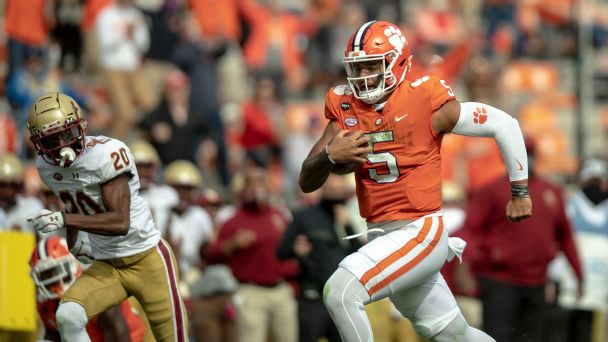 College football hits the ground running in Week 1 with numerous marquee matchups, and ESPN and ABC have you covered all weekend long. Not to mention the dozens of other games on ESPN+, the SEC Network, ACC Network and ESPN streaming.
(All games also available on the ESPN App.)

So imagine Anderson's frustration during his first few weeks in practice at Alabama in 2020, when the freshman couldn't get close to then-starting quarterback Mac Jones, no matter how hard he tried.

Of course, the Crimson Tide's twin peaks were standing in his way: right tackle Evan Neal (6-foot-7, 350 pounds) and left tackle Alex Leatherwood, a first-round pick of the Las Vegas Raiders in April.

"It humbled me and taught me a lot," Anderson said. "It kept my head straight."

And probably on a swivel too.

Going against potential NFL draft picks in practice every day is one of the challenges -- and blessings -- of playing at a program like Alabama.

"We're probably not going to see many guys in games that are better than what we see in practice every day," Neal said.

That's likely going to be the case for the No. 1 Crimson Tide in Saturday's opener against No. 14 Miami in the Chick-fil-A Kickoff Game (ABC, 3:30 p.m. ET) at Mercedes-Benz Stadium in Atlanta.

The Crimson Tide have had 106 players selected in the last 13 NFL drafts, more than any other FBS program, including 39 in the first round. Alabama had nine or more players picked in each of the last five drafts, including 10 this past April.

"I tell players all the time, 'When people tell you that you can't play here, you should be insulted by that or we wouldn't be recruiting you,'" Tide coach Nick Saban said. "If they tell you that you can play at their place before you can play at our place, then they're telling you we're better than them. If you ask our players, they're playing against good players and it makes them better."

There's no better example of that than Alabama's practices from 2014 to '16, when left tackle Cam Robinson battled defensive end Jonathan Allen every day. In their final season with the Tide, Robinson won the Outland Trophy as the nation's top interior lineman, and Allen won the Bronko Nagurski Trophy, Chuck Bednarik Award and Ted Hendricks Award as the top defensive player and defensive end in the country.

That has certainly been the case with Anderson, who started at linebacker as a freshman in the 2020 opener. He had zero sacks in the first seven games, but his production improved dramatically in the final six, helping the Crimson Tide win their third national championship in the last six seasons. Anderson ended up finishing third in the SEC with 7.5 sacks and 10.5 tackles for loss to go with 52 tackles and a team-high eight quarterback pressures.

"Being so young and going against grown men like Evan, it made me so much better," Anderson said. "I'm going up against a first-round draft pick every day. You've got no choice but to get better. He can move, has strong hands, he can bend -- everything you'd want in an offensive tackle."

Neal, a junior from Okeechobee, Florida, is one of the most athletic offensive linemen who has played for the Crimson Tide. He arrived at Alabama from IMG Academy weighing 385 pounds and has shed about 30. He played 13 games at left guard in 2019 and 13 games at right tackle in 2020. Last season, he had just three penalties and six missed assignments, allowing 1.5 sacks in 810 snaps. With Leatherwood departing for the NFL, Neal is moving to left tackle this season.

Even with his enormous stature, Neal routinely completes 48-inch box jumps and won the internet one day this summer with a video of an incredible split-leg box jump. He bench-presses 475 pounds, squats 650 and was clocked at 18.5 mph by GPS, according to Rhea.

"Offensive linemen aren't supposed to jump like that," Anderson said.

Neal credits his extraordinary athleticism to "God and genetics." His father, Eddie Neal, played linebacker at Tulane from 1981 to '84. His uncle, Cleveland Gary, was a star running back at Miami and a first-round pick of the Los Angeles Rams in 1989. Another uncle, Jimmie Jones, played defensive tackle for the Hurricanes from 1985 to '89 and was a two-time Super Bowl champion with the Dallas Cowboys.

As good as Neal was in his first two seasons, Saban still sees room for improvement.

"He's good," Saban said. "But I told him the other day, 'Look, man, all these pro guys, your ass is on the ground too much. For as good of an athlete as you are, and as big and as powerful as you are, your ass shouldn't be on the ground. The NFL people, that's what they're looking at: Why is your ass on the ground so much?' He's a really good player."

What's the most difficult part of going up against Neal in practice every day?

"He's huge and he can move," Anderson said. "His body takes up so much space. Sometimes, even when I get off the ball as fast as I can, his body is so big that he's already at the point of [engagement]."

For someone so fast, Anderson is also one of the Tide's strongest players. According to data provided by the school, Anderson squats 570 pounds and power-cleans 365. Rhea said Anderson's lower-body power ranks among the top 1% of all the current and former Tide players in the program's database.

"He's got really good ability, don't get me wrong," Saban said. "But he's a conscientious, hard-working and competitive kid. He's got good character, he's smart and easy to coach. I wish they were all like that. He's pretty special."

Whatever Anderson and Neal face against Miami, chances are it won't be as challenging as what they see from each other in practice.

"I beat him sometimes, he beats me sometimes," Anderson said. "We both get in good work every day. It's hard. It goes back and forth. We both know it's only making us better."