Before they take the field as college football players on Saturdays, some of the top recruits in the 2023 ESPN 300 rankings are playing underneath the lights on weeknights.

While Manning was doing things through the air, Buford High School's (Georgia) Justice Haynes was dominating on the ground. Haynes, one of two ESPN 300 running backs committed to Alabama (No. 18) -- right behind Richard Young (No. 14) -- accounted for all three touchdowns in Buford's 21-14 victory over North Cobb (Georgia).

Here's how some other of the nation's top recruits looked on Friday night, along with a few notes on uncommitted prospects visiting big Week 1 college football games:

Inniss took a kickoff to the house for 95 yards during the Patriots' win over the Braves.

.@brandon5star2 doing what Brandon Inniss does. A 95yd kickoff return to put heritage up 21-6 pic.twitter.com/4jKFO3xd0X

The 6-foot, 190-pound Inniss (No. 34) was one of three ESPN 300 wide receivers to commit to the Buckeyes on three consecutive days back in June.

His senior year at American Heritage has gotten off to a strong start as he has hauled in eight passes for 256 yards and three touchdowns over the first two games.

Cedric Baxter, Jr. is one of the many offensive talents -- led by Manning -- ticketed for Texas next fall. Baxter (No. 58, 2023) found some room to run during this 59-yard TD jaunt on Friday night as Edgewater High School (Florida) beat Don Bosco Prep (New Jersey).

Cedric Baxter Jr. with the house call for Edgewater. He's been a bit banged up in this game but nice vision and patience to get to the open field and gone. Top RB in 23 for @campus2canton #Longhorns #Texas #Longhornfootball #HookEm pic.twitter.com/dfm6wRYib6

Baxter closed out the 34-10 victory with a late 96-yard touchdown run as the Eagles improved to 2-0 on the young season. Baxter, who committed to Steve Sarkisian and the Longhorns on Aug. 10, is taking a visit to Gainesville on Saturday to see Florida welcome Utah.

Dylan Lonergan is one of two ESPN 300 quarterback commitments for Nick Saban and Alabama in the 2023 class. Lonergan (No. 23) displayed his arm with this beautiful throw during Collins Hill High School's (Georgia) 16-13 victory over the passer's Brookwood High School (Georgia).

Lonergan's commitment to the Crimson Tide on July 11 came almost two months after Eli Holstein (No. 13, 2023) pledged in May.

Alabama owns commitments from a pair of ESPN 300 quarterbacks for the first time since 2019.

Greathouse to the house

Notre Dame currently has the top-ranked class for 2023, according to ESPN's latest class rankings. Of the 23 commits Marcus Freeman and the Fighting Irish have to this point, 15 of them are in the ESPN 300. The versatility of Jaden Greathouse (No. 87, 2023) was quickly apparent on this punt return for a touchdown right before halftime on Friday night.

Jaden Greathouse is insane. What a freakish punt return for six right before halftime. 🤯

Play of the night without a doubt. pic.twitter.com/zJhj7Ymv8O

There's a reason so many major schools are seeking a commitment from Javien Toviano.

Toviano (No. 43), a cornerback from James Martin High School in Arlington, Texas, took an interception to the house in the third quarter on Friday in a 44-6 victory over Cedar Hill High School (Texas).

Javien Toviano with the pick 6 to end the Cedar Hill threat and extend the Martin lead to 39-6 with 3:04 in thr 3rd Q@j_toviano8 | @Martin_Football #txhsfb pic.twitter.com/XFwmrFXPP7

The 6-1, 185-pound Toviano took an official visit to Michigan in June and an unofficial visit to LSU in July and holds offers from Texas, Texas A&M, Alabama, Georgia and Oklahoma, among others.

He'll be in Columbus on Saturday to see Notre Dame face off with Ohio State before going to Gainesville for Florida's game against Kentucky on Sept. 10, according to his mother, Janicke. 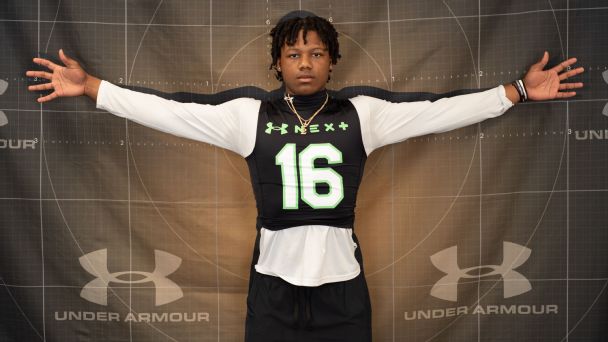 Trader and Smith, teammates at Chaminade-Madonna Prep (Florida), combined for eight catches for 172 yards and three TDs in a 35-28 upset over St. John's (Washington, D.C.) on Aug. 27.

Brown plays both ways for Jefferson High School (Georgia). He ran for 196 yards and four touchdowns while recording six tackles and intercepting a pass in a 56-28 victory over Wren (South Carolina) on Aug. 26.

Jalen Hale, No. 42 in the 2023 ESPN 300, is still on track to announce his college decision at some point in September -- possibly Sept. 21, according to his father, Courtney.

Courtney told ESPN that Jalen is taking official visits to Alabama's season opener on Saturday against Utah State before going to Austin on Sept. 10 as Texas hosts Alabama.

Mike Matthews, the 10th-ranked player in the 2024 class, is staying home this weekend for Georgia's season opener against Oregon in Atlanta, his father, Lee, told ESPN.

He took an unofficial visit to Georgia in March and was offered a scholarship in May. Saturday provides an opportunity for him to see Kirby Smart's program in action.

Matthews plays both sides of the ball -- wide receiver and safety -- and programs are giving him some leeway to choose what position he'll eventually play at the next level.

He has 10 receptions for 156 yards and three touchdowns during Parkview's 2-0 start and intercepted a pass in a 52-7 victory over Johns Creek on Aug. 17.

Matthews isn't the only top member of the 2024 class who will be taking in Saturday's game. Four-star wide receiver James Madison II (No. 31) and quarterback Jadyn Davis (No. 38) have received offers from both schools, and both have visited Georgia multiple times.