Power 5 heavyweights weren't the only ones who got a cupcake this week -- the College Football Playoff selection committee had it pretty easy, too.

The top 12 stayed exactly the same, save for a flip-flop of No. 2 Miami jumping ahead of No. 3 Clemson. Undefeated Wisconsin remained on the bubble at No. 5 in spite of its win over Michigan, which fell out of the top 25.

The bottom of the ranking was more interesting, as No. 24 South Carolina was ranked for the first time, just in time for its rivalry game against Clemson. While NC State dropped out, No. 25 Virginia Tech snuck back in, helping the résumés of both Miami and Clemson. The SEC had a Power 5-best six teams ranked, followed by the Big Ten with five. Auburn remained the committee's highest-ranked two-loss team at No. 6.

At No. 15, undefeated UCF remained in the exact same spot as the Group of Five front-runner for a New Year's Six Bowl, but No. 20 Memphis and No. 23 Boise State are also in the mix.

Here's what the playoff bracket would look like today: 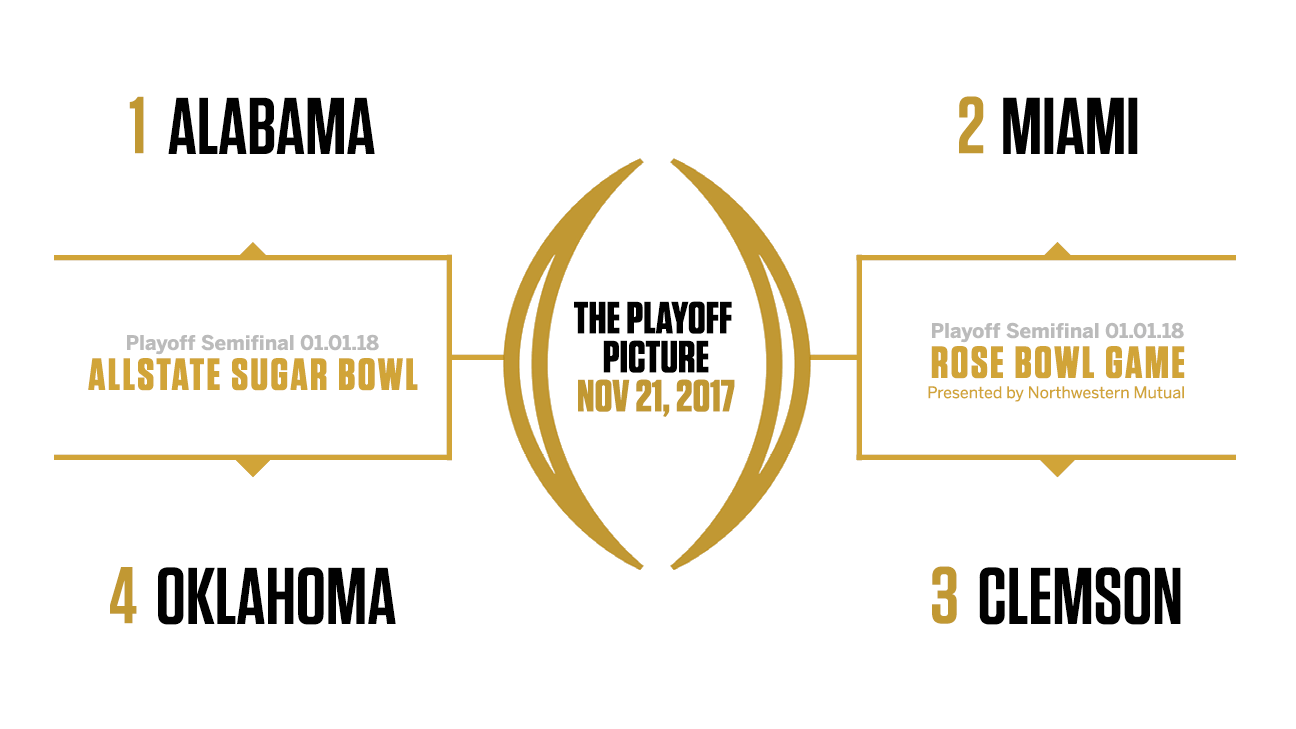 As for the other New Year's Six bowls, here's a projection based on the current ranking:

The Capital One Orange Bowl is guaranteed the ACC champion, but with projected champion Miami and runner-up Clemson both in a semifinal, it would choose the next highest-ranked ACC team, which is No. 25 Virginia Tech. The Orange Bowl must then select a nonconference champion from the Big Ten, SEC or Notre Dame. It would then turn to No. 6 Auburn, which is the highest-ranked available team meeting that criteria.

There is no limit on how many teams from one conference can qualify for a New Year's Six game, so it is possible for the ACC to have three teams in those bowls, considering Miami and Clemson would be playing in a semifinal and the Hokies would be in the Orange Bowl.

FiveThirtyEight has its final College Football Playoff projections ahead of Selection Day. Projections »

Any displaced conference champion from the Big 12, Big Ten, Pac-12 or SEC automatically gets a berth in one of the Cotton, Fiesta or Peach Bowl, which take into account fan interest and geography when selecting matchups. Because No. 11 USC, the projected Pac-12 champion in this ranking, and No. 5 Wisconsin can't go to their traditional spots in the Rose Bowl, they most likely would face each other in the PlayStation Fiesta Bowl.

The next-highest-ranked team available is No. 7 Georgia, which makes sense for the Chick-fil-A Peach Bowl in Atlanta. The Bulldogs likely would face No. 15 UCF, which would be guaranteed a spot in a New Year's Six bowl as the highest-ranked Group of 5 conference champion.

With No. 8 Notre Dame and No. 9 Ohio State as the highest-ranked teams still available, they would head to the Goodyear Cotton Bowl Classic.

Here's what the New Year's Six and New Year's Day would look like, based on this week's rankings:

(All games can be seen on ESPN and the ESPN App.)