When I think "thought police," I think "NCAA." After all, if you can see to it that performers and customers can only drink from cups with the "NCAA" logo at an NCAA postseason event, you've got some big hammer.

Thus, it was interesting to see the organization whose motto is, "You Pay To Do It Our Way" declaring that Indian mascots will be banned from NCAA events. It's a move that actually doesn't make the NCAA money, so you can imagine our surprise when the organization actually moved on it. 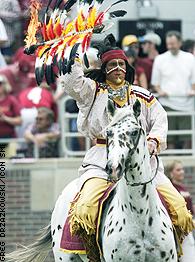 After all, whatever else you want to say about Bob Knight, he's onto something when he calls the NCAA a monopoly.

But here's the other interesting thing about the decision, a halfway measure designed to irritate everyone with an opinion on the matter: It opens up lots of other refreshing possibilities.

Or the insect freaks, who would target Hornets, Spiders and Anteaters. 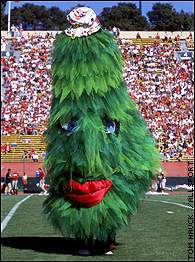 Or the Weather Channel, aiming at the Hurricanes, Golden Hurricane, Cyclones, Green Wave and Crimson Tide (unless you want to go with the elephant motif).

Or Alcoholics Anonymous, aiming for the Boilermakers.

The point here, after those five wasted paragraphs, is that the NCAA, in an attempt to further sanitize its events from things that will neither make money nor keep picketers away, has entered into a bizarre world in which it can bend the crueler reality -- that people get offended, sometimes with perfectly valid reasons, and corporations are particularly poor at dealing with those offenses.

Truth is, the NCAA hid behind "institutional control," the same thing that allows it the convenience of not thoroughly policing its members when it comes to academic performance, illegal inducements, performance-enhancing drugs and all the hard choices that the individual schools too often don't make on their own. The NCAA can look like it is doing something while doing essentially nothing, a task at which it is particularly skilled.

Either the NCAA finds Native American mascots to be offensive, abusive, etc., on their face, or it doesn't. If it does, then it asks for complaints from the Native Americans, from the above groups, plus the Greeks, the Irish, the armed services, the Daughters of the American Revolution, and the Crayola people. If they can regulate mascots, they can regulate them all, in all circumstances, for whatever reason, right or wrong.

And if it does not find Native American mascots to be sufficiently offensive, abusive, etc., it has no business going down the road at all. There is no halfway stance here for public relations points, to get out of a legal squeeze, or anything else. You either stand up or you don't, because squatting doesn't work.

In the meantime, the NCAA will now return to its more traditional role -- trying to keep Bob Knight out of committee rooms, and Gatorade in only the correct cups.

Ray Ratto of the San Francisco Chronicle is a regular contributor to ESPN.com