OMAHA, Neb. -- The celebration started at the Super 8 Motel in Omaha sometime before midnight Sunday, or nearly 48 hours after Arturo and Idalia Vela and their two sons jumped into a car in Monterrey, Mexico and headed north.

More than 23 hours later, and after driving more than 1,200 miles through five states, the Vela family arrived in Omaha around 1 a.m. Saturday, giving them plenty of time to sleep before watching one of the proudest moments of their lives.

Jorge Reyes, Arturo and Idalia Vela's grandson, was Oregon State's starting pitcher in Saturday night's opening game of the College World Series finals. No matter how far the Velas had to travel, they weren't going to miss it.

And they even came prepared to celebrate, carrying a barbequed goat, a Mexican delicacy, with them.

"We couldn't miss it," said Arturo Vela, the pitcher's uncle. "It's the World Series and you don't know if he's going to make it back here again."

Given the way the Beavers have played in the College World Series during the last two seasons, and with the way Reyes has pitched during a spectacular freshman season, chances are the whole family might be back in Omaha again this time next year.

With Reyes holding North Carolina's hitters to only three runs and eight hits in 6 1/3 innings, the Beavers took an easy 11-4 victory in front of a crowd of 26,887 at Rosenblatt Stadium on Saturday night. With one more victory, Oregon State will become only the fifth school to win consecutive baseball national championships.

"It felt good to win," Reyes said. "The trophy is right there and I really want it. I put our team one game closer to doing it."

A year ago, Reyes was warming up in the bullpen during a summer league game when his father told him Oregon State had beaten the Tar Heels to win the national championship.

Now, Reyes is a big reason the Beavers are within one victory of winning the title again, as he has pitched brilliantly during the NCAA Tournament.

I don't think anybody wants that ring more than I do. I've got three roommates who have been walking around wearing those big rings for the last year. I want one.

Reyes pitched six innings to beat Rutgers in an elimination game of the Charlottesville Regional earlier this month, in which the Beavers lost to Virginia in the second game, but then rallied to beat the Cavaliers twice in elimination games. Then he pitched in the opener of the Corvallis Super Regional and shut out Michigan, allowing only three hits in seven innings of a 1-0 victory.

"I don't think anybody wants that ring more than I do," Reyes said. "I've got three roommates who have been walking around wearing those big rings for the last year. I want one."

But Reyes also wants to win it for much more important reasons than bling. Nearly two decades ago, his father, Jorge, and mother, Nere, left Monterrey and immigrated to the U.S. For a while, they lived in Rio Grande, Texas, where the younger Jorge Reyes was born. For a few years, the family spent its time between Texas and Washington, working long hours in fields during harvest season.

Eventually, Jorge Reyes moved his family to Washington permanently. They went from Monterrey, a city of 3.6 million, to tiny Warden, Wash., a town of about 2,600 residents.

The town consists of mostly agricultural workers -- nearly 75 percent of the population of Warden is Hispanic, according to U.S. Census Bureau statistics -- and no resident is as famous as Jorge Reyes.

"They're all excited," Reyes said. "The town is pumped. When I was small, I said I was going to be a small-town boy who did big things."

Even without a national championship, the Reyes family has already accomplished big things. Jorge Reyes and his oldest son, Roberto, own a trucking company that hauls produce. In fact, the younger Jorge Reyes developed much of his arm strength working with his father, throwing potatoes across fields.

"When I was in high school, I always wanted to get drafted [by a major league team] because I saw how hard my father worked to get us to where we are," Reyes said. "I didn't want him to have to work so hard anymore." 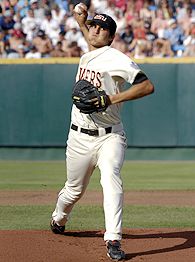 Jorge Reyes said his sons have already made him proud. Roberto was an outfielder for Division II Western Oregon. Younger brothers Arturo and Luciano also are budding baseball players.

"It's been exciting," Reyes' father said. "When you've worked so hard, you're so proud to see your sons playing college baseball."

Saturday night was the first time Reyes' grandparents and uncles had watched him pitch in the U.S. in person.

"It's a long way," the pitcher's father said. "But we told them, 'If we make it to the championship, come on!'"

Reyes is proud of his heritage. He keeps a bracelet with the words "Mexico" in the back pocket of his uniform. Before each inning, he squats behind the mound, crosses himself and then scribbles his grandparents' initials in the dirt.

For one night, at least, they weren't far from his heart -- or his sight.

"When I found out they were coming, it gave me that much more motivation to pitch well," Reyes said. "It's just so good to know they're watching and there's that much love out there supporting me."