OMAHA, NEB. -- Kathy Steele stood behind the mound at Rosenblatt Stadium on Sunday night, wearing a tiara and wedding veil in a sea of Gatorade-soaked and sweat-drenched jerseys.

A night earlier, Steele married Oregon State graduate assistant Kurt Steele in a ceremony at her parents' home in Philomath, Ore. The newlyweds hopped on a plane Sunday morning and flew back to Omaha, where they watched his baseball team beat North Carolina 9-3 in the finals of the College World Series to win a national championship for the second year in a row.

"Last night was great," said Kurt Steele, a former Beavers pitcher. "I can't say this is better, but it's pretty damn close."

Oregon State thought it had experienced its greatest day nearly a year ago, when the Beavers became the first team from a cold-weather climate to win the College World Series in 40 years.

A year ago, the Beavers were overwhelming underdogs against a field that included more established baseball powers like Cal State Fullerton, Miami and Rice. But after losing badly to Miami in its first game in Omaha, Oregon State won four in a row to reach the College World Series finals. The Beavers lost to the Tar Heels in the first game, then rallied to win two in a row.

But repeating as college baseball's national champion this year was an even greater -- and more improbable -- feat.

Not only did Oregon State become only the fifth school and the first in 10 years to repeat as national champions, but it also did it in dominating fashion. The Beavers won all five of their CWS games and trailed in only one of the 45 innings they played here.

And Oregon State won it all again when it wasn't even supposed to be here.

"Last year was great because nobody knew who we were," Beavers catcher Mitch Canham said. "This year is great because everybody counted us out. I don't care if they left us for dead. We knew where we'd be all along -- right here and in a dog pile at the end." 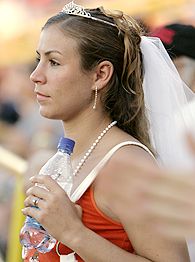 Oregon State won consecutive national championships in the sport where it's supposed to be the most difficult. College baseball coaches turn over their rosters like Scarlett Johansson turns heads. After each season, nearly all of the country's top players bolt for the major league draft, as soon as they pitch or hit for the last time during their junior seasons.

So imagine the anxiety Oregon State baseball coach Pat Casey must have felt this spring, when he was forced to replace all but two of his position players and his top three pitchers. Gone was left fielder Cole Gillespie, the Pac-10 Conference Player of the Year, who hit .374 and belted a team-high 13 homers and 57 RBIs in 2006.

Casey also had to replace starting pitchers Dallas Buck and Jonah Nickerson, who combined to win 26 of the team's 50 victories last season, as well as closer Kevin Gunderson, who saved 20 games.

Each of those aforementioned players were selected in the first seven rounds of the 2006 major league draft, along with four other players who were drafted and turned pro.

Casey pieced together a lineup of seldom-used returning players and a few freshmen. He built his team around Canham, the catcher drafted in the 41st round by the St. Louis Cardinals last year, and shortstop Darwin Barney, the team's emotional leader and glue.

But other than Barney, Canham and returning pitcher Mike Stutes, the Beavers were a bunch of unproven commodities.

And it wasn't easy. After winning 23 of their first 26 games, the Beavers were swept in three games of their opening Pac-10 series at Arizona. It was an ominous sign. Oregon State split its first 10 games in conference play, then lost eight of its next 11.

If not for winning two of its last three games at UCLA, the Beavers probably would have been left out of the NCAA Tournament altogether, after they finished sixth in the Pac-10 standings with a 10-14 record. Many believed the Beavers were invited to the NCAAs only because they were the defending champions.

At least the NCAA baseball committee made their road to Omaha difficult. Oregon State was shipped to the Charlottesville Regional the opening weekend of the NCAA Tournament, where they had to beat Virginia, perhaps the hottest team outside of the eight national seeds. The Beavers lost to the Cavaliers on the second day to fall into the loser's bracket, then had to beat Rutgers for a second time and beat Virginia twice.

But it was during that rain-soaked regional that Casey noticed something different about his young baseball team.

"There was never a time when I didn't think we'd be tough to handle," said Casey, who last summer turned down a lucrative contract offer from Notre Dame to remain at Oregon State. "But there was something in that dugout during the second game against Virginia. I'd never felt it before. I don't know what it was. It was magic. It never went away. It followed us to the field. It followed us on the bus. It followed us to the hotel."

And it followed the Beavers wherever they played during the NCAA Tournament. After beating Virginia twice to reach the super regional, Oregon State got its biggest break. Michigan upset top national seed Vanderbilt, so the Beavers hosted the Wolverines in Corvallis, instead of playing the Commodores in Nashville.

In the first game against Michigan, Wolverines starter Zach Putnam took a no-hitter into the ninth inning. Then second baseman Joey Wong had Oregon State's only hit of the game -- a two-out, run-scoring single that gave the Beavers a 1-0 victory. Oregon State won 8-2 in the second game to punch its ticket to Omaha for the third year in a row.

By then, Casey knew his team was capable of winning the College World Series again.

"I don't make predictions, but I just felt something," Casey said. "It was like Michael Jordan lighting up the Blazers from the 3-point line, or Reggie Jackson hitting those three homers in October. You don't know what it is, but you just feel it. We had it."

And the Beavers definitely had it at Rosenblatt Stadium.