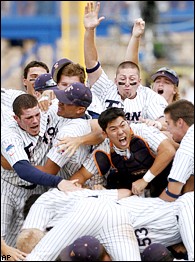 With two outs in the seventh inning and the game tied at 2, Suzuki walked to the plate.

"Would you look at that?" Horton proclaimed to senior first baseman P.J. Pilittere in the Titan dugout. "We've got the best hitter in America up in this spot. How about that?"

"Yeah," Pilittere yelled back. "And his favorite hole is wide open."

Then, some 10 seconds later, Suzuki lined a single between shortstop and third base, scoring Ronnie Prettyman and giving Cal State-Fullerton a 3-2 win.

"I'm the man and it was time to be the man," Suzuki said. "I was hoping that I was going to get that opportunity. And when I did, I had to pay the guys back for all the times they picked me up all series long. That was for them."

So despite his struggles in Omaha, there was good reason he was smiling.

"When that situation presented itself, I just told myself to have fun with it," Suzuki said. "It made no sense to be all nervous. So I relished it and I told the guys before I went up there -- this is for you right here.'"

Entering Omaha, Texas had one of the top bullpens in the country. But three games in a row this bullpen blew the save. On Saturday, it was Buck Cody who was charged with two runs, but J. Brent Cox gave up the go-ahead hit to Suzuki.

Prior to the deciding 1-1 pitch, Fullerton first-base coach Chad Baum yelled, "See it up," to Suzuki. It meant to look for an off-speed pitch. And that's just what Cox threw.

"I listened to my first-base coach, saw the pitch and hit it as well as I could," Suzuki said. "Luckily, it found a hole."

For Suzuki, it was more than likely the perfect ending to an illustrious career. The Maui native turned down a scholarship offer from Hawaii to walk-on at Cal State-Fullerton, in part to experience the mainland. And in part to make it to Omaha.

The Big West Player of the Year was a second-round draft pick by the Oakland Athletics and will likely forgo his senior season of eligibility at Fullerton to join the A's organization and catch Titans teammate Jason Windsor, Oakland's third-round pick.

"This is why I came to Fullerton," Suzuki said. "To get up in a situation like that and get the big hit. I couldn't be happier."

Nor could his teammates. But don't think they're going to let him forget anytime soon about his Series struggles. Handed a stat sheet following Sunday's championship-clinching victory over Texas, Pilittere couldn't resist leaning over and taking a shot at Suzuki, his close friend and roommate