OMAHA, Neb. -- The celebration was nearly over. The trophy had been handed out, the team photo had been taken and the Most Outstanding Player had been named -- but something wasn't right.

And then George Horton, the Cal State Fullerton head baseball coach and Dr. Ken Ravizza, the Titans' sports psychologist, nearly collided. Horton grabbed the doctor, pulled him in his arms and gave him a great big bear hug. 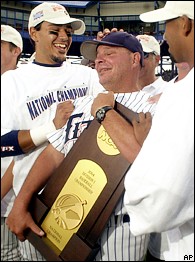 "Best money I ever spent," Horton said. "I hope you feel like you're a part of this because you had as much of an effect on this as anyone."

When the Titans were 15-16 and nothing could shake them out of a season-long funk, when 27 wind sprints -- one for each out -- and tongue-lashings from former Titans barely stirred his team, Horton turned to Ravizza.

The Cal State psychology/philosophy professor, the man had authored "Heads Up Baseball: Playing the Game One Pitch at a Time," who had consulted for everyone from the Anaheim Angels to the U.S. field hockey team and had helped individual Titan players in the past, broke the game down for the team and made it simple again.

By slapping quotes all over the clubhouse, putting stickers on the equipment and installing a makeshift toilet in the dugout, Ravizza set out to reprogram the minds of the Titans.

"First and foremost," Ravizza said. "I had to get their heads out of their rears. And they were hurting so bad, they were ripe for it."

Not all of it made sense -- or even seemed normal. But it worked. The team that was 15-16 before Ravizza came aboard went 32-6 after.

"He was huge. Absolutely huge," second baseman Justin Turner said. "The first day he showed up, he asked us, 'How would you guys like to be a part of the greatest turnaround in Titan history?' Our season turned around right there. And here we are now, national champions."

One didn't have to look far Sunday to see Ravizza's influence. There in the Titan dugout was a miniature plastic toilet the Fullerton hitters used to "flush away" bad at-bats. Not far away, plastered against the back of the dugout, was a series of motivational quotes.

"It's better to wear out than to rust out."

"The greatest thing in the world is to know one's self."

There on the bottom of the team's batting tee, a sticker with a stoplight on it and the words, "Check in Breath."

On the Rosenblatt Stadium mound, a smattering of dirt that Fullerton's pitchers brought with them from Southern California, in a declaration that the mound belonged to them.

Above the bat rack, a piece of ripped-out notebook paper with two words: "Hunt. Attack."

Above certain players' helmets, a strip of tape that's marked, "Keep your head up."

Rivizza wanted the players to believe. To get them to think about winning a baseball game not in terms of scoring more runs or winning each inning, but by winning each pitch.

"It sounds so simple, but there are so many layers to success," Ravizza said. "We had to peel each of those back and get down to the absolute basics."

Everything was done with the mind in mind. After a difficult defeat, such as Wednesday's 5-3 loss to South Carolina, the players would stand in a circle, take off their jerseys in unison and then crumple them on the floor.

"To get that game out of us. To forget about it," catcher Kurt Suzuki said.

The team studied its mental approach to baseball not only on the field but also in Fullerton classrooms. In dugouts. On the road in hotel rooms.

Before Thursday's start against the Gamecocks, in just his second start this season, Titan pitcher Scott Sarver spent the afternoon with Ravizza, visualizing potential positive and negative situations. Sarver, who hadn't pitched in 18 days, gave up five hits and zero runs in six innings.

Before warming up in the bullpen to replace Sarver, All-American Jason Windsor lay down in the Rosenblatt Stadium bullpen, closed his eyes and visualized success. While the game was going on.

Everybody, from the freshmen to the seniors, bought it. All you had to do was listen to Suzuki tell reporters that he was able to come through with the series-winning hit Sunday -- after going 2-for-20 in the series -- because he "flushed away" all those bad at-bats.

Even within an at-bat, Suzuki said Ravizza taught him to pretend he had a mini toilet tied to his belt. If things weren't going well, he should step out of the box, lift his hand and flush the little thing. Right there at home plate.

"The toilet was just a symbol. And a silly one at that," Ravizza said. "It helped the guys get rid of the bad stuff. Think about it, if you're having a bad day, you need to get rid of it. Just let that s--- go. And that's what the toilet did."

Sunday's championship game was the perfect microcosm for Ravizza's work. The team trailed 2-0 in the seventh inning and couldn't catch a break. Every hard-hit ball seemed to land right in the glove of a Longhorn. The umpires' calls seemed to be going against them. And the Longhorns were on the verge of turning the game over to their vaunted bullpen. Things looked bleak.

"Earlier in the season, at that point, we would have been done," first baseman P.J. Pilittere said. "Not even a threat. Nothing. We would have rolled over and been dead. But this team did a complete 180. And you saw the results of that tonight."

The team scored three runs in the seventh inning, the third on the clutch two-out hit by Suzuki, to win the championship.

Pilittere's happiness was displayed with a giant piece of masking tape that stuck to his championship T-shirt. Before the game, he had placed it on the back of the Fullerton dugout, right alongside Ravizza's motivational adages. It read, "Imagine how good it's going to feel."

Now Pilittere is feelin' it.

"He taught us a whole new way to look at things," Pilittere said. "If we were on the road, facing a homer umpire and he called a strike that was clearly a ball, instead of complain, Kenny taught us to turn around and say, 'Thank you for calling that a strike. I appreciate you making me a better ballplayer.'

"We stopped worrying about all the crap."

And if that didn't work, they flushed the crap away.

Late Sunday afternoon, when the team piled together for its championship photograph, Ravizza stood with the pack of photographers, like any other outsider. That is, until athletic director Brian Quinn saw Ravizza and yelled for him to "get where he belonged."

After Ravizza emerged from the crowd of photographers to join the team, the players went nuts.

"Get in here, get in here, Kenny! Just make sure you focus. And breathe."

He did. So did they.

Because they could breathe, they were national champions.