With a gaggle of seniors from last season's CCHA playoff championship team departed, Ohio State hockey fans might have thought divine intervention would be necessary for the Buckeyes to reach the previous year's heights. After all, coach John Markell needed to rebuild with members of his 11-man freshman class. 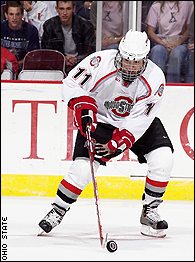 You can win with freshmen in the lineup, but you're not expected to when rookies make up more than half of it.

That's the case in Columbus, however. Ohio State, fresh off an impressive sweep of Northern Michigan at Value City Arena, leads the nation with nine victories and is 9-1-0 in its last 10 games. The Buckeyes look for wins No. 10 and 11 this weekend at Nebraska-Omaha.

Naturally, the freshmen have done more than play supporting roles during the Bucks' six-week run.

Well, almost half. Against the Wildcats, the Buckeyes had eight freshmen on the ice each night, and each night they earned their keep. On Saturday, forward Dominic Maiani scored a key insurance goal midway through the third period of OSU's 2-0 victory. In Sunday's series finale, Sam Campbell scored two goals and Ian Keserich stopped 31 shots in a 5-1 win.

"Our confidence is high, but we know at any time, anyone can beat us," said Fritsche, a Parma, Ohio, native whose brother, Dan, was a second-round pick of the Columbus Blue Jackets in 2003 and played 19 games in the NHL last season. "The first weekend, we lost two games. After that, we settled down and started winning."

Not only are the rookies winning, but they're contributing. To wit: Maiani, Fritsche's linemate, is the Buckeyes' second-leading scorer with 14 points. The other member of the Fritsche line, John Dingle, has three goals in nine games. Offensive-minded defenseman Kyle Hood, who scored 66 points for the Cowichan Valley Capitals of the British Columbia Hockey League last season, has 1-5-6 in 10 games. Defenseman Jason DeSantis, meanwhile, is tied for second on the team with a +6 plus-minus rating.

According to Fritsche, being part of a large freshman class has made the transition to the college game a little easier to handle.

"You're not afraid," said Fritsche, acknowledging the strength in numbers. "You've always got someone else there with you. But as it's gone on, the team has come together as one."

Should the freshmen maintain their level of play, who knows where the Buckeyes could be headed? Their path could end in their home rink in April.