COLUMBUS, Ohio  With a national championship on the line, University of Denver coach George Gwozdecky didn't think twice about sending out the kids to start the game.

And the kids made Gwozdecky look pretty smart — especially for starting Mannino in goal — as the Pioneers (32-9-2) skated off with a 4-1 win over North Dakota (25-15-5) to capture a second straight national title and the seventh in school history.

"They have strength, they have grit, they've got talent and courage. And we started four of them. That should tell how highly we think of our freshmen."

And while all four played a role in the Denver win, it was Mannino and Stastny who delivered the highlight performances.

Mannino made a career high 44 saves and was named the Frozen Four's Most Outstanding Player. In three NCAA Tournament games, the Farmington Hills, Mich., native is 3-0 with a 1.66 goals against average and a .950 save percentage.

He also is the first freshman to start and win a national championship game since North Dakota's Aaron Schweitzer in 1997.

"[Mannino] really played like he had been here before," senior right wing Kevin Ulanski said. "He showed great composure at the end of the season and proved he could play in the big game."

For his part, Mannino said he didn't build up the last game of the college hockey season as anything bigger than the other 22 games he played this season.

And he played like it. All night Mannino was in the right place at the right time to stop the UND attack.

The only shot that got by him was a redirection off the stick of the Sioux's Travis Zajac that tied the game at 1-1 midway through the first period. Five minutes later he made a nifty glove save that robbed — after a lengthy review — Erik Fabian of his third Frozen Four goal.

The rest of the night Mannino played with the polish and poise of a goaltender that looked much more like he was wrapping up his final college game instead of the last game of his first season.

"We don't really think of it as nerves," Mannino said shortly after carrying the NCAA title plaque to the postgame podium. "It's more excitement. To be in this situation, in the Frozen Four, it's just a thrill for all the freshmen and we just wanted to give as much impact to the team as we could."

A point that wasn't lost on North Dakota.

"It looked that once or twice we had him beat five hole and all of sudden the whistle blows, he stands up and the puck's underneath him," Fighting Sioux captain Matt Greene said. "The puck just seemed to disappear." 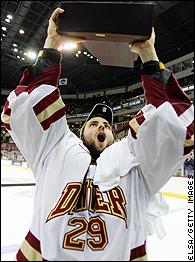 So did Stastny, the St. Louis native with the famous father (NHL Hall of Famer Peter Stastny) who joined Mannino on the all-tournament team along with teammates Gabe Gauthier, Matt Carle and Brett Skinner and North Dakota's Travis Zajac.

Stastny, who scored his 16th and 17th goals of the season, posted his fourth multi-goal game of the season and the game-winner (his first since Dec. 3) that was a redirection of a Ulanski shot that beat UND goalie Jordan Parise after it deflected off Stastny's butt.

"The first couple of shifts you get a little bit nervous, but then once you get into the groove of things, I think everyone just settles down," Stastny said. "It just follows from our seniors on down. They're not nervous out there, they're just having fun and I think the key is to have fun. That's what we were doing."

Denver, who is now in line for the first Division I hockey threepeat since Michigan did it in 1951-53, says goodbye to seven seniors who played in Saturday's title game. But assuming no one leaves early, they also welcome back the three juniors, six sophomores and the five freshmen who dressed in the title game.

And if the best thing about freshmen is that they become sophomores, Denver and its "kids" should be all right for a few years to come.

David Albright is a senior editor at ESPN.com and can be reached at david.albright@espn3.com.