NEW YORK  It was the breakthrough Columbia's Caroline Bierbaum had been waiting for. Well, desperately hoping for, really. A year ago, she didn't think she'd ever be able to run competitively again. By November, she was sprinting to a third-place finish in the NCAA cross country national championship race in Terre Haute, Ind.

There was only one problem.

The PA announcer thought she was someone else  namely Carol Henry of North Carolina, whose uniform was a very similar color and who was expected to finish ahead of Bierbaum. 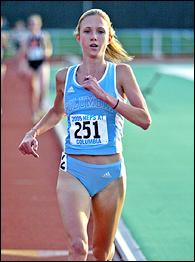 "I definitely was a little annoyed," said Bierbaum. "When I crossed the finish, I felt like just screaming my name out."

Who could blame her? But seven months later, Bierbaum no longer has to worry about being misidentified. She's the favorite to win the 10,000-meter national championship Thursday evening in Sacramento, Calif., at the NCAA Division I men's and women's outdoor track and field championships.

If she does, it would put an exclamation point on quite a comeback story. Bierbaum began her collegiate running career at Duke in the fall of 2002. She finished 34th in the cross country national championship as a freshman, an excellent result  but then decided to transfer to a college closer to home in New York City.

She settled on Columbia. But at the start of her sophomore year, she began feeling weak. Every time she went for a run, she couldn't keep her normal pace, and would have to stop and walk every 20 minutes or so. Worst of all, she had no idea why. "I thought maybe I had overtrained for too long," Bierbaum said. "Or maybe I'd just lost my passion for running. All I know is I was pretty miserable."

So, after running just one cross country race for Columbia in the fall of 2003, Bierbaum left the team. She continued to attempt runs on her own in Central Park throughout the rest of the school year, but things never got better. "I just sucked, and it only got worse," Bierbaum said. "So I figured that was it. My time had come. I'd have to move on to other things."

And that realization came as quite a blow. "Her life revolves around the sport," said Columbia associate head track coach Craig Lake.

But this past August, just prior to the start of her junior year, Bierbaum finally saw a doctor  just for a regular checkup. The doctor discovered that Bierbaum was anemic and instructed her to start taking iron pills immediately. "I felt a difference within five days," she said.

Still, she expected it would take a good while to build her strength back up. The Columbia coaching staff agreed  they assumed she would miss all of the cross country season. In fact, they didn't even include Bierbaum in this year's media guide!

After a few weeks of running on her own in the early fall, Bierbaum entered a couple of local 5,000-meter races at Van Cortlandt Park in the Bronx  and was pleasantly surprised by her results. On Oct. 16, while Columbia's top runners were at a more competitive event, Bierbaum ran in her first collegiate event of the season, the Lafayette Invitational  and won it. Two weeks later, she won the Ivy League championship. And three weeks after that came her third-place finish at the nationals.

"It was just fabulous," said teammate Delilah DiCrescenzo. "That opened everybody's eyes. Everyone was asking, 'Where did she come from?'"

Next came indoor track season, and another major hurdle. But it wasn't a health-related one. For all her running experience, Bierbaum had never raced on a track before. Her high school, Groton, a small boarding school in Massachusetts, didn't even have a track, let alone a track team. "I knew I had more in me," Bierbaum said, "but I wasn't sure how much my success from cross country would carry over."

It carried over quite well. Bierbaum finished second in the 5,000-meter indoor national championship. But she feels she's better suited for longer races  and with good reason. During the outdoor season this spring, she ran the fastest women's time of the year in the 10,000-meters, in 32 minutes and 44.51 seconds, establishing herself as the favorite in Sacramento.

Her coaches couldn't be prouder. "Her perseverance is what's gotten her here," said Lake. "A lot of people would have quit."

Bierbaum is thrilled just to be running again. But she also believes she has a good shot to win. "I don't want to get my hopes up," she said. "But I know I have the potential to take this one."

It won't be easy. Bierbaum will be competing against much more experienced women in the final. She has run this event only twice. And her coach said she's still learning what kind of pace she can run it at.

"She's so new to the sport still," said Lake. "But she just keeps improving, so you just don't know. The sky could be the limit with Caroline."

One thing's for sure. Win or lose on Thursday, everyone there will know her name.

Kieran Darcy is an editor for ESPN.com and contributor to ESPN The Magazine. You can reach him at kieran.d.darcy@espn3.com.