NEW ORLEANS -- What looks like the best team in Tulane
history was in serious danger of blowing its shot to make the
College World Series when Micah Owings decided he had to say
something -- anything -- to enliven his teammates.

"I was yelling -- I wasn't talking," Owings recalled of an
impromptu team meeting outside the Tulane dugout before the Green
Wave batted in the eighth. "I don't even remember what I said. I
couldn't tell you now, but we were all on the same page to pull
together there in the end." 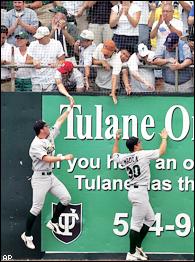 Tulane went on to score seven runs in the final two innings in a
9-6 victory over Rice on Monday that clinched the New Orleans super
regional and moved the Green Wave on to its second College World
Series since 2001 -- and the second in school history.

And it was Owings -- a day after the best pitching performance of
his college career -- who drove home the decisive run in the top of
the ninth with a blistering line drive over the glove of Rice
shortstop Josh Rodriguez, breaking a 6-6 tie.

"It would have been a shame if this club had not had a chance
to compete in the College World Series," Tulane coach Rick Jones
said. "To go through the season playing the toughest schedule
we've ever played and go 55-10 ... that shows it has been a great
year."

Shut down for much of the game by Rice starter and breaking ball
specialist Eddie Degerman, Tulane trailed 3-2 heading into the
eighth.

The Wave's late rally gave Tulane victories in the final two
games of the best-of-three Super Regional. Tulane won Game 2 on
Sunday behind a complete-game, three-hit shutout by
Owings, who was selected last week by the Arizona Diamondbacks in the Major League
Baseball draft.

"We came up against a ball club that I think has the
qualifications to win a national championship," longtime Rice
coach Wayne Graham said. "They're as good a hitting team as we
have faced over the years."

Tulane reliever Daniel Latham (2-0), who had given up three runs
in the eighth as Rice (45-19) tied the game at 6, retired the side
in order in the bottom of the ninth for the victory. And Wave
players piled on defensive replacement Cat Everett after he caught
the final out on Henley's pop-up in foul ground near third base.

Reliever Adam Hale (1-3) was charged with the loss after giving
up three hits and three runs in the ninth.

Playing as the visitor before a record crowd of 4,708 -- hundreds
of them on metal bleachers newly installed for the series at its
on-campus ballpark -- Tulane periodically mystified its fans with
blunders in the field and on the bases.

Green Wave runners were thrown out at the plate in both the
first and second innings on soft infield grounders -- the second a
botched safety squeeze in which the hitter executed the bunt but
Scott Madden hesitated too long before deciding to come home from
third.

But this Green Wave squad -- one that didn't have double-digit
losses until being shocked by Rice in the series opener -- proved
powerful enough to overcome the jitters, even if one of the most
decisive swings of the day was downright timid.

Degerman, who struck out seven, had shut out Tulane for more
than six straight innings -- retiring 18 of 20 batters in one
stretch -- when Brian Bogusevic came to the plate with two out and
two runners on in the eighth. Bogusevic took a defensive swing at
an 0-2 curve ball that was breaking down toward his ankles, getting
just enough to roll it into center field past diving second baseman
Greg Buchanan.

The hit brought home two runs and prompted a pitching change
that only seemed to help Tulane as Madden and Joe Holland -- who
both finished 2-for-4 -- drilled back-to-back doubles to bring home
two more runs in the inning.

Degerman "is a heck of a pitcher," Owings said. "I was glad
to see him pulled ... I knew we had a shot if they took him out."

A single by Tyler Henley and doubles by Buchanan and Lance
Pendleton helped Rice pull even in the eighth before Tulane took
the lead for good.

"One good thing is that Edie Degerman didn't get a loss,
because he pitched too darned good to get a loss," Graham said.
"He thought he could beat Bogusevic [in the eighth] and he did. He
stayed off the fat part of the bat ... but the ball found the
middle of the field."

Earlier, Adam Rodgers and Danny Lehmann each hit solo home runs
off Tulane starter J.R. Crowel as Rice took a 3-2 lead. Those
were the only two earned runs allowed by Crowel, who gave up six
hits and struck out two in six solid innings.

Nathan Southard had a single to stretch his hitting streak to 20
games.