CHAMPAIGN, Ill. -- Illinois lost its appeal of the ban on
the university mascot Friday and will remain on a list of schools
prohibited from hosting NCAA postseason events after February.
The NCAA will allow Illinois to keep its "Illini" and
"Fighting Illini" nicknames. The university contended those
nicknames derived from the name of the state.
The governing body, however, said Chief Illiniwek remains a
"hostile and abusive" image of American Indians. The mascot is a
student dressed in buckskins and headdress who dances at halftimes
of home football, basketball and volleyball games. The tradition
began in 1926. 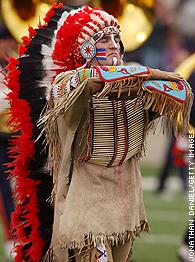 "The NCAA staff review committee found no new information
relative to the mascot known as Chief Illiniwek or the logo mark
used by some athletics teams that depicts a Native American in
feathered headdress, to remove the university from the list," said
Bernard Franklin, the NCAA's senior vice president for governance
and membership.
School spokesman Tom Hardy says the university will study the
decision before determining how it will proceed. The university can
appeal to the NCAA executive committee.
Hardy said the university was gratified about the NCAA ruling on
nicknames.
"I'm sure that will be comforting to the students and hundreds
of thousands of alumni who are proud to call themselves Illini,"
he said.
The NCAA's decision on American Indian mascots, issued Aug. 5,
bars universities on its list of schools deemed to use hostile
imagery from hosting postseason championship events. It requires
those schools to remove any offensive nickname or logo from team,
cheerleader and band uniforms when participating in postseason
tournaments.
The University of North Dakota, included on the NCAA list, is
appealing.
The State Board of Higher Education next Thursday plans to
consider a resolution that supports the appeals UND is making
through the NCAA's internal process. It encourages UND to research
and explore all options.
The proposed resolution also states that UND should conduct
discussions with North Dakota Indian tribes "in order to find
common ground."
"This is an attempt by me and our office to get something in
front of the board and to respect their sentiments on the
appropriate way to go forward," Chancellor Robert Potts said. "My
sentiment from talking to individuals is that they have been very
comfortable with the way [UND] President [Charles] Kupchella has
handled the issue up to this point."