CHESTNUT HILL, Mass. -- Tucked back in a far corner of the hockey trophy case is a goalie stick. It's easy to miss among the other Boston College hardware if you don't look closely. 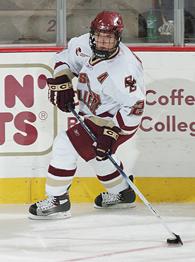 That piece of BC history is close to being out-of-date because current Eagles backstop Cory Schneider is less than two periods of shutout hockey away from passing Clemmensen's mark.

On a late-January Saturday that felt more like early spring, thanks in large part to a high temperature that reached 60, BC turned up the heat on Hockey East's newest member. And thanks to a weekend sweep of then-No. 5 Vermont at a sold-out Kelley Rink, the Eagles (16-4-2) appear to be a legitimate contender to reach April's Frozen Four in Milwaukee.

For now, BC will have to be content with being ranked the No. 1 team in the nation.

"Well, Cory Schneider's not a bad goaltender, let's start with that," Catamounts coach Kevin Sneddon said with a laugh that was laced with part frustration and part admiration after BC blanked UVM 3-0 (Watch on ESPN360) to complete the sweep. "I thought he played a fantastic weekend and certainly tonight, he might have even been better than last night. It wasn't just that he made some saves, he made some huge saves. I wanted to check in-between periods and make sure there wasn't Plexiglas behind him.

"We threw everything we had at them and BC was the better team this weekend. We had a lot of scoring opportunities but we ran into a brick wall. I think it's more of a credit to Cory Schneider than anything. I thought we did a lot of great things tonight but we couldn't find a way to beat him, plain and simple."

No one has lately.

Since returning from a stint as the U.S. goaltender at the World Junior Championship in Vancouver, Schneider is 5-0 with a 0.40 goals against average and a .987 save percentage. For the season, the 2004 first-round pick of the Canucks (26th overall) has posted numbers (14-4-1, 1.79, .934) that have him ranked in the top 10 nationally across the board.

On Saturday, the sophomore turned away 33 Vermont shots to record his third consecutive shutout (he blanked Merrimack 5-0 on Jan. 14 and UVM 2-0 Friday night) and to complete the first shutout sweep for BC since Clemmensen turned the trick against Providence on Jan. 16-17, 1998 as part of his record scoreless streak.

Schneider's consecutive scoreless minutes streak has now reached 217:49. The last goal he gave up was back on Jan. 13 against Merrimack, when his errant pass was picked off and deposited in an empty BC net.

"I thought that Vermont took it to us for most of the first and second period, and we called upon Cory to make save after save after save," BC coach Jerry York said. "It was a shooting gallery. His display of goaltending was as fine a display as I've seen. Grade A chances were denied time after time. We went into the third period with a lead and I can't really figure how we did that except for Cory's play."

Schneider was only called upon to make six saves in the final 20 minutes Saturday night but it was his denial of Corey Carlson on a breakaway that provided the highlight of the weekend.

The UVM freshman found himself all alone, heading toward the BC net, but even three different moves weren't enough to solve Schneider.

"I didn't even see the play develop and all of sudden he came with the breakaway," Schneider said. "He made a good move. He faked the shot and then headed to his backhand, so I kind of bit on that, and then at the last second he pulled it forehand and fortunately with a desperation move I was able to get a piece of it.

"That's the kind of weekend it's been, getting some fortunate bounces."

About the only thing Schneider has been better at deflecting lately than black vulcanized rubber is the praise he has been receiving for his stellar play.

"I'm seeing the puck really well, anticipating and the game seems to slow down a little bit," Schneider said. "I've been fortunate to be on top of my game the past few weeks, but I think my teammates helped me out a lot. It's a combined effort from both the team and myself. A lot of factors go into something like this, including puck luck. I just can't say enough about my teammates."

"All it means to me is that we're winning games," Schneider said. "Beat a top-five team like Vermont and sweep them, that's a huge weekend. I don't care if I give up six or seven goals as long as we get the W."

Schneider may not see himself as the main reason that BC is riding a nation's best 9-0-1 unbeaten streak, or that the Eagles currently enjoy an eight-point lead in Hockey East over second place Providence, New Hampshire and Boston University, but his teammates would say otherwise.

"He's being a little modest right now," BC captain Peter Harrold said. "He was the backbone of the team tonight. Without him, we wouldn't have won this game. It makes it easier for the rest of us and you can't say enough about him."

According to York, Schneider showed flashes of his current play last season when he posted a 13-1-4 record (1.90 GAA, .916), the only loss coming in the NCAA East Regional championship against North Dakota.

But last year's team was a veteran group that included current Boston Bruin Andrew Alberts and Ottawa Senator Patrick Eaves -- not to mention nine other seniors that won 97 career games at The Heights.

The current BC team is the youngest in Division I, with 12 of the 24 players born in 1986 or later. And the defensive corps includes four freshmen and a sophomore to go along with captain Harrold.

There's a little more experience up front, as the top line of seniors Chris Collins and Stephen Gionta being centered by junior Brian Boyle has accounted for more than 41 percent of the BC goal production.

But Schneider has given the Eagles' 10 freshmen time to develop.

"I think we have a good mix," York said. "Boyle and [Joe] Rooney have been very solid for us, and our three seniors are having banner years. Chris with the 20 [goals], Steve Gionta is playing his best hockey, and Peter Harrold keeps proving he's the best defenseman in our league. They have good people to look up at and I think that's helped our freshmen.

"We miss the physical presence that Alberts brought us last year, and we miss the tenacity and skill of Patrick Eaves. But we're developing other players and that's kind of the key. We lost 11 players from last year so none of us knew what would happen. But Cory's the key to it. He just steps up."

He'll be asked to do so again when BC hosts Commonwealth Avenue rival Boston University on Friday. The Terriers were the last team to tag the Eagles and Schneider with a loss back on Dec. 3 at Agganis Arena.

In addition to watching the Eagles try and take the season series from BU, BC fans also will be watching the game clock to see if Schneider can register another 36:35 of scoreless hockey to pass Clemmensen in the Eagles record book.

If that happens, look for Schneider's Sherwood to find its way into the BC trophy case.

David Albright is the senior coordinator for college sports at ESPN.com and can be reached at david.albright@espn3.com.