WASHINGTON -- In congratulating NCAA championship teams on
Thursday at the White House, President Bush joked that the U.S.
Military Academy's rifle team might be able to teach Vice President
Dick Cheney a thing or two. 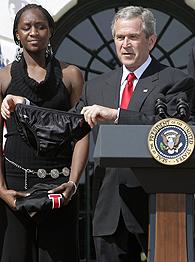 "If you happen to be walking around and run into the vice
president, you might give him a few pointers," Bush said,
referring to how Cheney accidentally shot a companion while hunting
in Texas.

Bush, who said he'd be at West Point next month to deliver a
commencement speech, honored 12 NCAA teams, including Stanford's
women's cross country team, for winning national titles during the
2005 and 2006 seasons.

Bush's quip about Cheney got the biggest laugh at the ceremony
on the South Lawn.

"Less than 48 hours ago, they were cutting down the nets in
Boston," Bush said. "Here they are soaking up the sun at the
White House. We welcome you here. We marvel at your dramatic
overtime win and we thank you for being such fantastic athletes."

The women's basketball team was one of three Maryland teams Bush
honored. The women's field hockey team and men's soccer team were
NCAA champs in 2005.

"Perhaps one theme of champions day is 'Fear the Turtle,"'
Bush said.

"Awfully thoughtful of you," he said, holding it up for the
audience to see. "I'm not going to wear it."