MILWAUKEE -- Just four years ago, the Wisconsin hockey program appeared to be in ruins -- or at least well on its way. 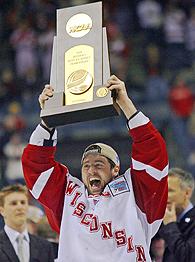 Mike Eaves, who won a national championship as a Badger in 1977, was brought back to coach Wisconsin in 2002, but his first year behind the bench didn't produce the desired results.

Instead, the Badgers stumbled to a 13-23-4 record, the storied program's lowest win total since 1976.

And that was the highlight.

The most publicized incident involved Eaves and then-sophomore Alex Leavitt at a North Dakota hotel after a November 2002 loss to the Sioux.

News of the incident didn't come to light until late February, when Eaves and the athletic department made a public statement in which Eaves said, "I regret the incident at UND and feel we have put it in the past and established a plan for the future."

Then-athletic director Pat Richter said, "Understandably, this has been a difficult season for the men's hockey team, but I have complete confidence that Mike is the right coach for the program."

The plan worked, and Richter was right.

Fast forward to Saturday night: Wisconsin (30-10-3) completed a historic rise from the ashes to claim its sixth national title -- and first since 1990 -- after holding off Boston College 2-1 at the Bradley Center, in front of a sellout crowd of 17,814.

Only five players remain from that first Eaves-coached team, and each played an integral part in the title run.

First and foremost was defenseman Tom Gilbert, who scored the title-winning goal on the power play at 9:32 in the third, when he was the final piece of a tic-tac-toe pass that started with senior captain Adam Burish at the left point. The Madison native found Joe Pavelski in the left circle, and he made a no-look pass to Gilbert in the slot.

The assistant captain wasted no time, firing a low wrister that beat BC goalie Cory Schneider to the stick side.

"I think I had two chances earlier [on the power play], and I was thinking to myself, I'm not going to strike out three times," Gilbert said. "Joe Pavelski made a great pass to me, and I just buried my head, and I knew the puck was going to go in."

From there, the Badgers hung on, limiting Boston College (26-13-3) to just four shots in the third period and shutting the Eagles down completely on the power play. BC had four chances with the man-advantage, but couldn't manage even one shot on net. Wisconsin went 1-for-8 on the power play.

The Badgers ended the season by killing off the last 36 power-play chances against them, including a perfect 16-for-16 in the NCAA Tournament.

"I think Wisconsin is the best team we have played this year," BC coach Jerry York said. "Cory Schneider kept us in the game and we had it where we wanted it with [about] 10 minutes left in the game, it was 1-1. They capitalized on their power play and we didn't. That was the difference.

"We did a great job on the penalty kill. Most games I would take 1-for-8."

BC nearly sent the game to overtime in the final seconds. Defenseman Peter Harrold ripped a shot from the left point that was deflected by Brian Boyle and hit the post to the left of goalie Brian Elliott with 1.6 seconds left.

"I got a piece of it and I thought it went in," Boyle said. "I thought we tied it up, but we didn't, and we lost a national championship. It's not the best feeling in the world right now."

That feeling resided down the hall, in the Badgers' dressing room.

"This is a testament to how great our seniors have been, and how their leadership has guided everybody," Elliott said. "From when I came in here, and they were only sophomores, and they were always leading the team then. They've really taken this program from the bottom to the top, and you can't say enough about those five guys."

Make no mistake about it, this season was laid out perfectly for the Badgers -- if they could deliver. From the Frozen Tundra Classic at Lambeau Field (a 4-2 win over Ohio State) in February, to winning an NCAA Regional across the street at Green Bay's Resch Center (a 1-0 triple OT affair against Cornell) in March, to hosting the Frozen Four just 80 miles from campus in April.

"It's a storybook ending and a Cinderella story," senior Ryan MacMurchy said. "We hadn't won anything our whole four years. Looking at the schedule, you saw the Green Bay Regional and Milwaukee with the national championship.

"It was everything it lived up to be in our dreams, and we got it done with blood, sweat and tears."

And some trust between the coaching staff and the players.

Before this season, Eaves showed his team part of the movie "Seabiscuit" to demonstrate that they had to rely on each other if they were going to make it to the Frozen Four in their home state.

"['Seabiscuit'] talks about the jockey and horse and how they have to work together to get the job done," Eaves said. "They have to be on the same page, and I think as this year has gone on, and over the years together with these seniors, there's a trust that's been built up.

"Once the level of trust is raised to a higher level, you can back off as a coach. I think one of the keys to being an effective coach is giving your team what they need. If they need direction, if they need sternness, then you give it to 'em. If they don't, back off and let them take control. We, as a coaching staff, were able to do more of that this year, because we had developed that with our seniors."

Gilbert, Burish, MacMurchy, A.J. Degenhardt and Nick Licari will be remembered as the five players who weathered the storm and survived to see this day come true.

"I think the ripple effects from winning this are going to be felt for a while," Eaves said. "I think after watching us, you'll see kids pulling on their mom's and dad's coattails saying, 'I want to get into hockey, I want to be Adam Burish, I want to be Joe Pavelski.'

"I think that's a tremendously healthy thing for hockey in this state. I'm excited to see the ripple effects over the next few years."

Now, the only thing that may end up in ruins is Madison after the title celebration.

David Albright is the senior coordinator for college sports at ESPN.com. He can be reached at david.albright@espn3.com.