HEMPSTEAD, N.Y. -- Softball has no clock, no way to measure exactly how much time remains.

Once the first pitch smacks into the catcher's mitt, the game stops only at the whim and will of those involved. And on a brilliantly sunny spring day, with winter's brooding silence receding and lengthy lazy afternoons stretching from here to Labor Day, it's easy to feel exempt from time's onward march, as if a game might really carry on forever. 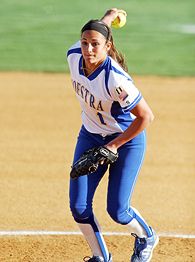 Kayleigh Lotti knows that feeling, knows how the rest of the world seems to fade away when time is tracked by counting forward in potentially infinite innings instead of backward in minutes and hours. And freed from the constraints of a clock that ticks ever closer to zero, she knows what it's like to control her own destiny. As a pitcher in a sport dominated by those who work in the circle, she is among a group that controls the course of events as much as any position in any team sport.

But more than most people, and certainly more than most 18-year-old college freshmen, Lotti knows all too well that it's just an illusion. That no matter how much raw promise or polished success any of us display, time never truly bends to our will.

Lotti is the ace for a Hofstra softball team looking to extend a tradition of success by earning the program's seventh NCAA Tournament berth in the last eight seasons. But if not for a sore shoulder that eventually led to the discovery of an undiagnosed heart condition requiring open-heart surgery before her senior year of high school, Lotti's time might have ended on the same softball field that now promises such a bright future.

With the shock of Army women's basketball coach Maggie Dixon's tragic death still fresh in many minds, Lotti offers a glimpse of at least one young life that might have been spared because of sports, one story that didn't end too soon.

A pitching sensation at St. Raphael Academy in Pawtucket, R.I., Lotti was a two-time Gatorade Rhode Island High School Player of the Year, allowing just one earned run in her final two seasons. As a top prospect, she found herself pitching in front of big-time college coaches at a national summer tournament in Colorado between her junior and senior seasons.

Only something didn't feel right in her shoulder.

"I was pitching in Colorado, and I was having arm pains," Lotti recalls. "I couldn't really pitch anymore, so we went to a walk-in clinic, and they took X-rays of my arm. And I guess when they took the X-rays, they showed my ribs, and that's how they picked up on it first."

What the X-rays revealed were notches in her ribs that, in conjunction with unusually high blood pressure, hinted at something far worse than anyone originally suspected.

"The doctor thought she had some kind of tendinitis and sent us home," Sharyn Lotti, Kayleigh's mother, says of that initial visit. "He was very concerned about her blood pressure and told us to check it out when we got home [to South Attleboro, Mass.]. He called us back later that night and said they read the X-rays and had found some notches on her ribs, which was an indication of the heart condition that she does have.

"He said, 'You really need to get to a cardiologist when you get home' -- of course, we were away for another four or five days -- and for her to stop playing softball."