Georgia Tech junior third baseman Wes Hodges was diagnosed with an early stress fracture in his lower leg on Monday. He initially thought it was a calf strain when the pain began in late March, but the duration and intensity of the pain continued to increase and prompted further evaluation. 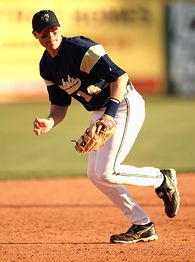 Hodges has missed six of Georgia Tech's last 11 games and served only as a DH and pinch hitter in the others. The pain comes and goes, so he'll play sporadically throughout the rest of the season.

"There's days where it doesn't feel too bad for him and days where he definitely hobbles around a little bit," Hall said. "To his credit, with everything he's got riding on the line [in terms of the draft], from March to April he was basically playing on one leg. I think a lot of guys in that situation may have packed it up, but he wanted to be part of our team and to help our team win. I don't think a lot guys would have done that."

Hodges leads a list of key Yellow Jackets battling injuries. Sophomore center fielder Danny Payne (.356/.488/.628 with 11 homers) was the team's top hitter until sustaining a dislocated shoulder, concussion and cracked ribs in an April 28 outfield collision, and hasn't played since. He is evaluated each Monday, but he has yet to swing a bat since the injury. Payne won't play in the Atlantic Coast Conference tournament and looks doubtful for at least the first weekend of the NCAA Tournament.

Tech closer Tim Gustafson (2-0, 3.94 ERA with four saves) likely won't be available until the super regional round. He's battled an arm injury and hasn't pitched in May. He started a throwing program Wednesday.

Junior right-hander Blake Wood (8-4, 5.40 ERA) has battled shin splits for most of the season. The injury doesn't have a direct impact on his ability to pitch, but it limits the amount of conditioning and running he's able to do between starts.