PHILADELPHIA -- Clustered underneath a blue-topped tent to hide from the oppressive sun and throwing back a few cold beers minutes before game time, three fathers watched their kids playing in the parking lot. 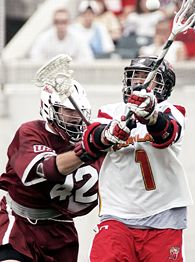 Ordinarily this scene plays out with either a football or a baseball being tossed around, but on this Memorial Day weekend, the boys turned a deck chair into a makeshift goal to play a little bit of tailgate lacrosse.

Soon the fathers and sons would join the 23,990 inside Lincoln Financial Field to watch the Division II and III national championship games and on Monday would return for the Division I title game between top-seeded and undefeated Virginia and Cinderella upstart Massachusetts.

Before this weekend arrived, lacrosse fans and officials were worried that the public black eye their sport had received by the events at Duke -- where three players have been accused of raping an exotic dancer hired to perform at a team party -- would tarnish the game and subdue the party that is the annual championship weekend.

If there is a black cloud hovering about lacrosse, it was hard to spot during a clear blue sky weekend in Philadelphia, where the parking lots around the stadium were stuffed with adult fans kicking back and relaxing before the games and kids, some smaller than the sticks they were carrying, lining up inside the sponsor tents to test their skills.

The atmosphere was more World Cup party than somber sport in mourning.

"This is the greatest weekend," said John, one of the fathers who didn't wish to give his last name. "Look how many people are here. That tells you that all of the Duke stuff hasn't affected this sport at all."

If anything, the fallout from the scandal at Duke has caused lacrosse fans to circle the wagons. No one is condoning what happened and Duke and everyone agrees that even if the players are not guilty of rape, then they are certainly guilty of bad judgment, but the fiasco in Durham has rallied lacrosse fans to stick up for their sport and defend their game.

"I think everyone, because of this situation, has a chink in their armor," said former Syracuse legend Ryan Powell, in town to do some promotion work for the lacrosse and soccer manufacturer Brine. "Lacrosse is a big family."

For every fan who carried a disparaging, "Where's Duke?" sign at the Final Four, there were five more wearing Free Duke T-shirts.

"I'm quite frankly sick of it," said UMass defenseman Jake Deane. "I don't know what happened and I never will, but I'm sick of hearing people disrespect my sport."

This championship weekend, NCAA officials asked reporters to refrain from asking questions about Duke and at least one tournament official declined comment on anything related to Duke.

Even those not currently working under the NCAA's thumb are shy to put their names to any quotes they offer. A group of college players from a New England school asked that their names and their school be kept out of this story "or else our coach will kill us. If we say something, then we're associated with it."

"This is a lot of people's first impression with lacrosse and that's so unfair," one of the players said. "It's unfair to us and it's unfair to them."

Frankly, it's easy to understand where the players are coming from. Since the story broke, a game that a year ago was heralded as the fastest growing game in the country has endured an onslaught of criticism. Old stereotypes of lacrosse players as the aristocratic, whales-on-pants wearing prepsters resurfaced, shoving aside last year's notion of lacrosse as the perfect X-game team sport.

This happened, after all, at Duke, one of the most prestigious universities in the country. That the accused are white and the accuser is black, that a little digging revealed that other players on the lacrosse team had a laundry list of alcohol-related charges and one penned a foul-tongued e-mail didn't help.

A country almost inured of seeing athletes with criminal charges took exception to the perceived image of rich, white kids who thought they could get away with anything.

"If you want to focus on bad decisions the players made, we know that happened," said U.S. Lacrosse executive director Steve Stenersen. "We do know there was underage drinking and they hired a stripper. That indicates poor choices, but people all over the country, regardless of playing a sport, make poor choices. To indict an entire sport is unfair. Don't think what happened at Duke represents the lacrosse culture. That's a false assumption."

The scene in Philly certainly reaffirmed Stenersen's belief. For a sport long pigeonholed as a niche game, the fans that descended on the Linc proved otherwise. There were snazzy SUVs and sports cars parked next to beat-up wrecks, little kids and college-aged kids tailgating next to fans who clearly played back when the sticks were wood instead of titanium.

Whether they were hoping to catch a really errant pass or just wanted to prove they were players, kids carried their sticks into the stadium and eagerly snatched up gear at the stands.

"We're not rich," said Kevin, a father of two lacrosse-playing boys from West Islip, N.Y. "That stereotype is 20 years old. Kids today are playing all over. It's mainstream."

Lee Stevens, tournament director for this weekend's championship, said he set a personal goal of 50,000 for Saturday's semifinal.

He got close, with 49,562 passing through the turnstiles. On Monday, a record-setting 47,062 fans attended the championship, totalling 144,688 fans over the championship weekend.

Beneath the Friday night lights, there is now lacrosse in Texas.

"When I played in high school, there were maybe 15 teams in Pennsylvania," Stevens said. "Now there are 115. Kids are falling in love with it. You don't have to be big. It's fast, there's lots of scoring. What else could you want?"

But as much as many associated with the game would like the Duke story to go away and would deny its impact on the sport, that's simply not possible.

For starters, Duke played for a national championship last year and with a number of key starters returning, most figured the Blue Devils would be making a return trip to Philadelphia. Instead, the program is in disarray, its coach forced to resign and its players scattering to other schools as transfers. Rebuilding it to the power it had become will take years.

Monday's title game, in which Virginia capped an undefeated season with a 15-7 victory over Massachusetts, which appeared in its first title game, was haunted by an imaginary asterisk.

What if Duke had played?

"We were all so concerned with the events of the spring, they affected us all so directly that it was hard to think of what we were doing as the most important thing going on in the world," said Virginia coach Dom Starsia. "Really, I told people a number of times, when they asked about being undefeated, I felt any number of times, especially in the month of April, what's the worst thing that can happen to us? We lose a lacrosse game. We're going to be all right here."

The biggest question as championship weekend winds down: Will the sport be all right?

"Honestly, I don't think anyone cares right now," said one of the New England collegiate players. "People are here, they want to watch the games and have a good time. I know I haven't thought about Duke the whole weekend, and I'm sure that's true for a lot of other people."

The solution to this problem won't come via the justice system. Regardless of any verdict that is rendered, there will be doubters on both sides of the equation.

The solution to the problem goes back to the kids -- those attending this weekend's championship, those watching at home, those flocking to fill lacrosse leagues.

They don't care about scandal; they simply want to play.

Kevin, one of the dads outside the Linc, said his eldest son, a fourth grader, picked Duke as his school after last year's Final Four. So when he saw the school on the news, he naturally asked questions.

"I tried to candycoat it a little. I didn't think he needed all the details," Kevin said. "But he didn't care. He's a kid. They're bandwagon jumpers. Two years ago, he liked Navy. Now he's standing over there in Cavaliers shorts now. He just loves the game."

Dana O'Neil is a reporter for the Philadelphia Daily News. She can be reached at dgoneil@msn.com.