PHILADELPHIA -- Dom Starsia was trying to explain why this Virginia lacrosse team was unique. 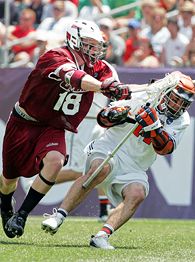 He talked about this team's sense of purpose and presence, its calm amid a season of turbulence in the sport.

Really, though, what's been different is the losing.

The seniors, who serve as the epicenter of this team, won a national championship as freshmen. For most folks, that would be the most memorable part of the journey.

But these guys remember the next year, the 5-8 finish that meant they watched the playoffs from home, the first losing season in 17 years at the school.

And they remember last year, a crushing semifinal defeat to Johns Hopkins.

On Monday, the Cavaliers found the best way to erase those memories, putting together yet another season for the lacrosse record books. Virginia topped upstart Massachusetts 15-7 for the Division I NCAA men's lacrosse championship, to finish 17-0, the first undefeated mark in school history and the first championship team to win 17 games in a season.

The Cavaliers won their fourth national title in front of yet another record crowd. Proving that the growth of lacrosse is more than just talk, 47,062 pushed through the turnstiles at Lincoln Financial Field for the championship game, besting even the crowd at this year's basketball championship game. For the weekend, 144,688 watched what had long been pigeonholed as a niche sport.