OMAHA, Neb. -- Cory Vanderhook took one swing the entire
game for Cal State Fullerton. It sent the ball bouncing 90 feet
away -- more than enough to prevent the Titans from making a
depressing trip home. 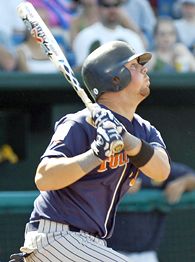 "I'm just happy to come through for the team," the senior
catcher said. "It wasn't the best hit, but I'll take it."

With Georgia Tech leading 5-4 and an out away from advancing,
Blake Davis singled, Brett Pill doubled and Danny Dorn was
intentionally walked by closer Matt Wieters.

Vanderhook, the nephew of Titans third-base coach Rick
Vanderhook, slapped Wieters' first pitch up the middle. Shortstop
Michael Fisher charged to his left but couldn't handle the
slow-bouncing ball, which took a bad hop and rolled away as two
runs scored.

The hit sent the exuberant Titans out of their dugout in
celebration, mobbing Pill and Davis with high-fives and hugs.

Posted in Cal State Fullerton's dugout was a sign that suited
the moment: "Never tell a Titan he can't do something. BELIEVE."

"Nothing I've ever experienced or been involved with has been
as crazy as that, or exciting as that," Titans coach George Horton
said.

The Titans will play top-seeded Clemson in an elimination game
Tuesday. The Tigers lost to North Carolina 2-0 in the late game
Sunday.

Vanderhook transferred to Cal State Fullerton before the season
from South Carolina, which was eliminated by Georgia Tech in the
regionals last year.

"I said before the game, 'If I get in today, I'm not going to
let Georgia Tech end my season two years in a row.'" Vanderhook
said. "It's that much sweeter against Georgia Tech."

Brandon Tripp followed Vanderhook's hit with an RBI single that
fell in front of left fielder Jeff Kindel, making it 7-5.

Ryan Paul (3-1) got five outs to earn the victory on a steamy
92-degree day at Rosenblatt Stadium, with dugout fans blowing wisps
of water onto the players and many in the crowd fanning themselves
with game programs to stay cool.

Wieters (1-3), who started the game at catcher, allowed three
runs and four hits in 1 1-3 innings for Georgia Tech. It was the
second time in the College World Series that the Yellow Jackets
blew a late lead. They gave up eight eighth-inning runs in an 8-4
loss to Clemson on Friday.

"Probably two of the toughest losses I've ever been part of,"
Georgia Tech coach Danny Hall said. "We had the lead both games,
and not to be able to close them out is hard to take.

Wieters hit a questionable go-ahead homer in the seventh, lining
Miller's first pitch of the inning to left. Dorn went back to the
wall and leaped, but a shirtless fan snatched the ball with his
bare hands before the left fielder could make the play.

The umpires ruled the hit a home run, and Horton didn't dispute
the call. Television replays were inconclusive as to whether
17-year-old Jason Schmidt of Mitchell, S.D., prevented Dorn from
making the play.

"I hit the wall, I didn't really feel anything," Dorn said.
"Everything happened so quick."

Georgia Tech took a 3-0 lead in the first on an RBI single by
Kindel, a sacrifice fly by Whit Robbins and an RBI single by Wes
Hodges. The Yellow Jackets made it 4-0 in the third when first
baseman Pill mishandled Fisher's grounder with the bases loaded,
allowing a run to score.

Cal State Fullerton closed the gap in the fourth when Dorn hit
into a run-scoring double play. Justin Turner's two-out RBI single
in the next inning made it 4-2.

The Titans tied it in the sixth on Tripp's RBI triple off the
408-feet sign in dead-center, and Clark Hardman's liner down the
third-base line.

Wieters became the first person to pitch and play catcher in a
College World Series game since The Citadel's Gettys Glaze, on June
4, 1990 -- also against Cal State Fullerton.