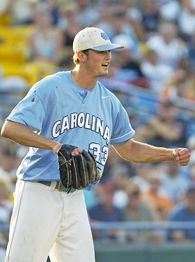 On Saturday night, the All-American and Detroit Tigers' first-round draft pick will be in an entirely different setting and frame of mind when he takes the mound for the opening game of the College World Series championship against Oregon State.

Despite all the national attention the event receives, Miller doubts there's a huge buzz back home over the Tar Heels being two wins away from the school's first NCAA baseball title.

"Basketball, probably, is still tops back in Chapel Hill," he said. "I don't think it really matters. I think we kind of like laying low a little bit. Obviously, we like having fans at our games, but generally I don't think we want the spotlight the basketball team is in all the time."

Carolina -- which has gone 8-0 in the NCAA Tournament after dropping both of its games in the Atlantic Coast Conference postseason event -- has at least captured the admiration of men's basketball coach Roy Williams. He attended the Heels' first two contests here -- a 13-inning, 7-5 win against Cal State Fullerton that the left-handed Miller received a no-decision in and a 2-0 shutout fueled by a three-hit, complete-game performance by right-handed junior Robert Woodard.

Williams, beloved for bringing Carolina a national title in 2005, is expected back for the championship series. So is football coach John Bunting.

"I'm sure we're getting plenty of coverage and everybody knows [about our success]," Miller said, "but I think it's going to be hard for college baseball to beat out college basketball in North Carolina.

"Maybe our lives will improve a little bit when we get back, but they had helicopters following our basketball team all the way back from their national championship. I'm not expecting that if it works out for us."

A stark contrast to 53-13 Carolina -- the only squad of the eight CWS qualifiers to rank in the top 15 nationally in batting average and earned-run average -- is Oregon State.

The Beavers (48-15) lost their CWS opener 11-1 to Miami to drop to 0-5 all-time in the event. They responded by winning four games over four days, and punched their ticket to the best-of-three championship set against Carolina by blanking top-ranked Rice 5-0 and 2-0.

"The basketball team's struggled a little bit and our football team kind of struggled lately. I think our community really embraces our baseball team, especially after last year," junior left fielder Cole Gillespie said. "It's a little town [and] throughout the season we got good support."

Even after the Beavers went 0-2 at last year's CWS, they received a warm welcome back in Goss Stadium.

"We had our fans come in, our governor -- it's a huge deal for us," Gillespie said. "A few of us got to go to the state capital and meet the governor. He's a huge baseball fan ... so people back there are really going to focus in on where we're at right now."

Carolina also has averaged nearly 10 runs in their eight NCAA Tournament games. That production has been set up by leadoff hitter Mike Cavasinni, whose .439 on-base percentage in those contests is 46 points higher than his regular-season number.

It's unlikely, though, that Casey's club is getting too worked up about its task.

Since the loss to Miami, Oregon State, which features nine draftees, hasn't trailed one inning.

"One thing we talked about after the Miami game was the confidence of who we are and how we've played all year long," Casey said. "I don't think there's a team that has played in the College World Series that somewhere during the season didn't have a game when they lost to somebody that they've shouldn't have, or played poorly. We certainly did that in a time that we didn't want to, so the credit goes to the players for really believing in what they do and what kind of club they had."

"I think if you don't have that kind of confidence as a team, then you probably panic at that point and time."

If the Beavers needed something beyond confidence, they could look back to 1998. That's when another Pac-10 school, USC, gave up double-digit runs in an opening-round loss and came back to win the title.

While Oregon State's pitching rotation is depleted from having to work through the losers' bracket, the Beavers are expected to start right-handed junior and third-round draft pick Dallas Buck (12-3, 3.43) on Saturday. Thereafter, Casey will piece things together.

Gillespie has paced Oregon State's offense this season by hitting .377 with 12 home runs and 55 RBI. At the CWS, first baseman Bill Rowe leads all players with an 8-for-17 performance that includes four RBI.

"All these college athletes work so hard to one day have the ultimate dream, and that is to win the national championship," Casey said. "To think there's only two clubs left that have that opportunity certainly makes it special for all the players involved. There is no event like the College World Series, so we're anxious to get the thing going and have some fun with it."

The fact the Beavers are playing for the crown almost seems unbelievable to their sophomore shortstop Darwin Barney.

"After that second practice we had five days ago, you put those practice pants away and wonder if you're going to use them again," Barney said. "Today when I was getting ready to come here, getting my stuff together, it was kind of a surreal feeling. You just kind of sit back and you have to take it all in, because this only happens once in a lifetime.

"I think it's pretty special for both these teams right now, because it's something you've got to take and remember for the rest of your life."

Curt McKeever is a reporter for the Lincoln Journal Star.