OMAHA, Neb. -- Oregon State was an underdog the moment it took the field at the College World Series.

The Beavers didn't come from the right part of the country. They didn't have enough pitching. They couldn't keep fighting off elimination.

Bill Rowe had a parting message for those who doubted Oregon State:

"This is how the ring looks," the senior first baseman said.

The Beavers (50-16) became the first team in CWS history to lose twice in Omaha and win the national championship. Oregon State also is the first truly Northern-based school to win the series since Ohio State in 1966.

"I think we came here and a lot of people out there picked us to lose every single game, so thank you for doing that," closer Kevin Gunderson said. "It gave us a lot of motivation to go out there and prove those people wrong." 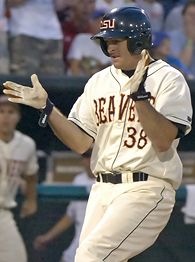 With the score 2-2 in the eighth, Rowe drew a two-out walk and Tyler Graham blooped a single into left. Tar Heels ace Andrew Miller, the No. 6 overall pick in the major league draft by Detroit, came on in relief of Daniel Bard and got pinch-hitter Ryan Gipson to one-hop a grounder to Steed.

The second baseman, who came in as a defensive replacement in the fifth, threw wide and past first baseman Tim Federowicz for the Tar Heels' fourth error of the game as Rowe came home with the go-ahead run.

"There was two outs, so I was just thinking about getting to third and I knew it was going to take either a bad hop or a bad throw to score me on that," Rowe said. "I turned third, looked and saw the ball going toward the dugout, took two hard steps and realized I was going to be able to coast into home."

The Beavers stormed out of their dugout and mobbed Rowe as the Tar Heels (54-15) grew silent on the other side of the field.

"I probably got rid of it too quick," Steed said. "It was a little bit up the line. Didn't make the play."

North Carolina put two runners on against Dallas Buck (13-3) with one out in the ninth, but Gunderson got Josh Horton to hit into a fielder's choice, and -- with the tying run on third -- got slugger Chad Flack to fly out to center to end it.