RALEIGH, N.C. -- Duke athletic director Joe Alleva injured
his head during a boating accident on a lake north of Durham, and
his son was charged in the wreck. 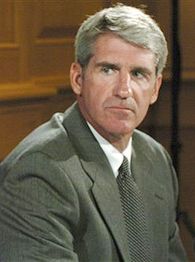 Joseph David "J.D." Alleva, 27, was charged with operating a
boat while impaired Friday after the ski boat he was driving ran
onto a pile of rocks at Hyco Lake.

Sgt. Tim Sasser of the North Carolina Wildlife Resources
Commission said Tuesday that J.D. Alleva refused to give officers a
breath or blood sample, but three officers smelled alcohol on him
several hours after the accident.

The boat was going about 18 mph or more in a no-wake zone when
it hit the rocky bank of a canal on the lake, driving most of the
boat out of the water and damaging its hull, Sasser said.

After the accident, the younger Alleva swam about three-quarters
of a mile to the nearest lake house to use a telephone to call for
help, Sasser said.

His father was treated at a a hospital, where he got 42 stitches
to his head.

"The nurse counted 42 outside stitches in the middle of his
forehead into the hairline. It was a curved cut that penetrated
deep," Sasser said. "They did several inside stitches. He took a
pretty good lick. I call that a severe injury."

In a statement issued Tuesday, Joe Alleva said he wasn't
seriously injured and was back at work. He said the accident
"occurred as we were trying to navigate our way back to shore in
dark, rainy conditions." The statement did not mention the charge
against J.D. Alleva.

Alcohol use has been a hot topic at Duke this spring. The school
canceled the season of its nationally ranked men's lacrosse team
after an exotic dancer told police she was raped by team members at
a party in March. Three players were charged and face trials.

After the rape allegations, a university panel recommended that
the lacrosse team be closely monitored because of a history of
alcohol-related problems.

The younger Alleva played baseball at Duke from 1998-2001, the
same year he was charged in Durham County with driving while
impaired.