When a baseball player is hitting well, coaches and analysts will often discuss how that player changed his approach at the plate. 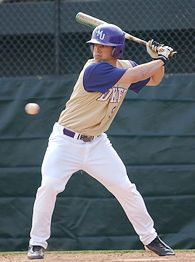 The marked statistical improvement shown by James Madison University outfielder Kellen Kulbacki could be considered evidence he changed his approach at the plate. After all, this season Kulbacki hit .464 with 24 home runs and 75 RBI, numbers that put to shame his rather pedestrian 2005 freshman campaign.

While Kulbacki may have changed his approach at the plate this past spring, he attributes his dramatic improvement to seeing a sports psychologist.

"It was a way for me to clear the things that were bothering me from my head and get onto the field, where I could put it behind me and not worry about it," he says.

As the resident sports psychologist for James Madison's athletic department, Dr. Wendy Borlabi rarely enters a dugout or a locker room. Still, one could consider her a coach of the mind and spirit.

Kulbacki's sessions with Borlabi at first focused exclusively on his mentality on the baseball field.

"We started talking about school, family and friends once we finished talking about the baseball aspect," he says. "It became a way to say things that were bothering me and get them off my chest so I wasn't carrying that burden onto the field."

Kulbacki says he sought the help of a sports psychologist after hearing about professional athletes who employ psychological training.

"Hearing from athletes in the pros, I know A-Rod has one, it was an opportunity that I needed to check out to see if it helped my game at all," he says.

"I figured if I give [sports psychology] a shot and pick up a few pointers, I can have that mental edge as an athlete throughout the season."

While sports psychologists have been common in the pro ranks, Kulbacki is part of the growing contingent of college athletes who seek what Borlabi calls "mental skills training."

"We train physically, we train tactically, but very few college teams train mentally," Maniar says. "If someone is dropping pass after pass on the field, the coach says, 'You have to concentrate.' But very rarely do we train them to concentrate. How do you block out distractions in a big game? It is just assumed that athletes know how to do that."

The field of sports psychology can be divided into two separate areas of focus: the mental aspect of on-the-field performance and the mental health of the student-athlete.

The performance-enhancement side of sports psychology can work to improve on-the-field results in a variety of ways such as correcting concentration problems or helping a player relax.

"Maybe I see when it's a pitcher in a 3-2 count, he really tenses up, and mechanically his arm is going off to the side and not over the top," says Maniar.

Maniar believes the mental health aspect of sports psychology is significant because off-the-field problems can affect on-the-field performance. More important, a sports psychologist can give athletes a coping mechanism for the pressure of college life.

"A lot of times we see that student-athletes are just as susceptible to mental illness as the rest of the population," he says. "Whether or not that is affecting performance, it is still a concern for administrators across the country."

"Our culture has, for a long time, stigmatized psychology in general. The athletic culture has an attitude of do it on your own. It is kind of a willpower orientated culture. Seeking help or assistance that everyone isn't using may be perceived as weak."
-- Nicki Moore

Maniar compares the field with weight training in sports during the mid-1980s. In the early stages of weight training, he says, most teams didn't have a strength and conditioning coach. Today, that is hardly the case.

"Hopefully in 15 or 20 years, a majority of teams will have someone working with them," he says.

The growth of sports psychology in college athletics can be attributed, at least in part, to increased demand from student-athletes.

In 2004, Oklahoma added sports psychologist Nicki Moore to its staff after a survey of athletes revealed a desire for sports-specific counseling.

"I think more universities are recognizing the needs of student-athletes on a performance-enhancement and psychological well-being level," Moore says.

"The normal kind of things that students go through may be exacerbated by the very heavy responsibilities that we place on our athletes," he says.

Skeptics of the practice point to the fact that there is no concrete evidence that sports psychology affects an athlete's performance.

"I am the first to tell you that I don't take credit for victories and I don't take it for losses," Maniar says. "It's tough to measure progress even if you're working with an athlete and his performance goes up. Is it something the coach did, or is it you?"

For the field to continue to grow, Moore says more athletes will need to be open about the fact that they see a sports psychologist.

"Our culture has, for a long time, stigmatized psychology in general," she says. "The athletic culture has an attitude of do it on your own. It is kind of a willpower-orientated culture. Seeking help or assistance that everyone isn't using may be perceived as weak."

Kulbacki has no problem being open about seeing a sports psychologist.

"I don't really think there is any real reason why I should hide," he says. "It is definitely beneficial for me to want to have a mental advantage over other people. I have played a hundred games after going through [sports psychology]. I have seen a huge difference in the way I approach the game. I think it has had a huge effect on me having a successful year. I don't have a problem being open about it because it works for me."

Brendan Murphy is a college sports intern at ESPN.com. He can be reached at Brendan.R.Murphy.-ND@espn3.com.