Kudos to Anthony Kim, formerly of the University of Oklahoma, and Kyle Reifers, formerly of Wake Forest. The pair who played together on the victorious U.S. Walker Cup team in 2005 were the only two people in the 148-player field at the most recent PGA Tour Qualifying School who were members of college golf teams the previous spring. And both players earned their tour cards: Kim finished T-13 and Reifers T-30, grabbing one of the last spots after making bogey on his final two holes.

As impressive as Kim's and Reifers' accomplishments are, however, it's disappointing that they were the only two players straight out of college who even had a shot at getting tour cards, which leads me to the point of this here sermon:

One of my biggest problems with the PGA Tour is the closed shop they've created in trying to earn a tour card. Simply look who actually did play in La Quinta, Calif., and all the retired names that appear year in and year out (Michael Allen was making his 13th Q-school appearance, having earned a card nine times; Marco Dawson, Brian Bateman and Dicky Pride earned cards for the fifth time). Everyone complains that there are no young Americans on the PGA Tour compared to the young Europeans or Aussies. Well, if the PGA Tour didn't make it so difficult for recent college players to earn tour cards and gain the valuable experience of playing in PGA Tour events -- or even just elbow their way past the old boy club that seemingly gets back to the final stage each year -- then maybe that wouldn't be as big an issue.

Think about it: in football, baseball, basketball and hockey, top college players have direct access to playing at the highest level in the pro ranks thanks to the amateur entry drafts. In golf, there are essentially two ways a college player can get to the PGA Tour the season after he finishes his college career. The first is by getting sponsors' exemptions into PGA Tour events and then earning enough money in those events to match what the 125th best player the previous season earned. Since 1980, Gary Hallberg, Phil Mickelson, Justin Leonard, Tiger Woods and Ryan Moore are the only ones to accomplish this feat straight out of college.

Part of the problem with that route is that it assumes top college players can get the necessary sponsors' exemptions. Well, that's a huge assumption. Consider Kim, who left Oklahoma after his junior year, could only manage to get one exemption (Valero Texas Open). He finished tied for second in that event, which earned him a spot in the Southern Farm Bureau Classic the next week. A T-16 in Mississippi was also a solid showing, but was sadly the last he made on tour in 2006. 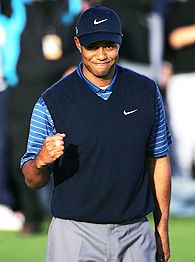 Kim isn't just any college player; he was a first-team All-American who hits his driver 325 yards without making a full turn and has a short game to boot. If he were a college football player, he would go in the top 10 in the draft, maybe top five.

Meanwhile, Reifers managed just one sponsor's exemption on the PGA Tour, missing the cut at the Deutsche Bank Championship. Because he managed to win his very first start on the Nationwide Tour this summer, he was seemingly an attractive person to play in a PGA Tour event. Nevertheless, the former All-American got no other bites.

So instead of the first route available to college players, Kim and Reifers had to travel the other path: Q-school. Because Kim had only two PGA Tour events worth of experience, he had to start at the first stage and grind his way to a card. Reifers would have been in the same position, but because of his Nationwide Tour win, he at least got to skip the first stage.

Since 2000, there has never been more than three players in any year who earned PGA Tour cards straight out of college. Instead, top talents such as Bryce Molder, Ricky Barnes and Brock Mackenzie had to languish in the minor leagues, losing confidence as they waited for another shot at Q-school.

Bottom line: The PGA Tour needs to figure out an improved feeder system to allow players directly out of college better access to the PGA Tour. I don't mean the tour should hand out cards to any first-team All-American, but they should allow for amateur accomplishments to exempt players through the first stage of Q-school. Can you imagine the NFL not allowing Notre Dame senior Brady Quinn to join the league next year unless he proved himself in three exhibition games first? That's essentially what the PGA Tour does.

I know golf is a different sport, one in which you have to earn everything you get. I'm not asking that this change; college players need to earn their cards like everybody else. But as past PGA Tour players get to skip first and second stages, these college players are penalized for their youth. That's not good for the players, and I'm not sure it's good for the PGA Tour, either.