You think of Michigan's Fab Five and Pittsburgh's Ben Roethlisberger. You might stretch your mind a little further and dig up other cases of young athletes not acting their ages. There is a reason why terms like "rookie mistake" exist. Youth and inexperience are not generally ingredients for victory. 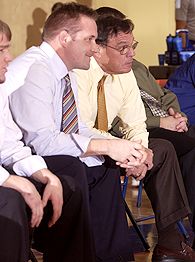 Bucknell wrestling coach Dan Wirnsberger certainly didn't think so. He had hopes for how this season might go, but he also had realistic expectations: one dual meet victory, maybe two.

It's hard to blame him. Bucknell, you see, is in the first season of its return to Division I competition after being relegated to club status following the 2001-02 season.

Wirnsberger's entire 10-man lineup  heck, his entire roster  is made up of freshmen. Nobody is taking a redshirt year; the vast majority of the kids are straight out of high school.

And yet at the virtual midpoint of the Bison's dual-meet season, they are not winless. They have eclipsed Wirnsberger's modest expectations. Bucknell is 6-5 in dual meets, including a four-match winning streak heading into a dual Sunday against Bloomsburg  where Wirnsberger used to coach before he took a chance and headed to a program he thought could someday be a winner.

Wirnsberger just didn't think it would be this year.

"I'll be honest. I'm very surprised where we are at this point in the season," he said. "But one thing I know about wrestling is that what you put into the sport is what you get out of it. And these guys have been busting their tails."

The hard workers have talent. Wirnsberger was hired in May 2005 and spent much of his first year on the job recruiting and getting ready for this season.

"The whole point was bringing the program back the right way, not throwing outselves out there where it wouldn't be fun," Wirnsberger said. "The best thing we did was take that first year to work on getting things off and running, even though it was a frustrating year. I'm a competitor, and it definitely tested me, but I became a better coach because of it."

The result was a class rated in the top 20 by both W.I.N. and InterMat. Andy Rendos, the starter at 165 pounds, has already cracked InterMat's top 20 rankings this season.
These are numbers Bucknell wrestling backers figured they might never talk about again. 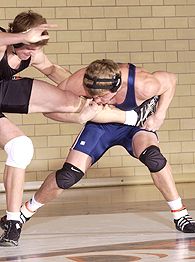 Wrestling and men's crew were reclassified as club sports to help bring the school's athletic programs into compliance with Title IX, the law aimed at giving women comparable athletic opportunities to their male counterparts. As colleges moved to comply with aspects of the law, they had two choices: adding women's sports or dropping men's sports. In many instances, men's sports were dropped, and wrestling often felt the brunt.

"Just from what I've seen and what I know, wrestling seems to be the biggest target when it comes to Title IX," said Bucknell 197-pounder Eric Lapotsky.

Once programs are cut, bringing them back is even tougher than saving them. At the risk of abusing a term, it takes a miracle.

And that's where Bill Graham stepped in. Graham, a 1962 graduate of Bucknell and an ex-wrestler, announced in 2004 he was giving a $5.6 million gift to the university. Part of the gift established a component of the women's rowing team and helped fund other women's sports. The rest established an endowment to pay for the wrestling program every year.

"His passion is wrestling. He was a wrestler at Bucknell and he credits his success in business  things like desire and work ethic  to wrestling," Wirnsberger said. "It wasn't just, 'Here's the money, good luck.' He said, 'Let's see how good we can get.' He and I are pretty much cut from the same cloth. We want success, and we want it right away."

Many Bucknell wrestlers had a chance to talk with Graham recently when the team dedicated its wrestling room to him in a ceremony.

"We all have talked to him and had a chat with him," said 133-pounder David Marble. "He's a guy who's very down-to-earth. He just wants to see us do as well as possible."

The wrestlers have lived up to their end of the bargain. Toiling away at the school in Pennsylvania  about 170 miles from Philadelphia, 180 from New York City and 200 from Pittsburgh, nestled in a nook where Marble admits there "isn't much to do"  the Bucknell wrestlers have been charting a course for success since the first dual of the year. That bout, against ACC power Maryland, started with Bucknell wondering whether it could even compete.

But after eight weights, Bucknell led 15-14. Lapotsky delivered a pin at 197, clinching an eventual 27-14 victory  even if Wirnsberger had no idea what had just happened.

"I was so focused on the individual weights," Wirnsberger said. "When he did that, I turned to someone on the bench and asked what the team score was. I had no idea."

The Bison won two of their first three duals before losing four in a row. Since then, however, they have rebounded with a four-dual winning streak in which the smallest margin of victory has been 19 points.

How are they doing it? Sometimes trial by fire works.

"There are definitely some issues of lack of experience, but I've really been surprised by some things," Lapotsky said. "I've seen some of the teams, at tournaments we've gone to, and they're loaded with upperclassmen. And I can't tell much of a difference in maturity between them and us. I'm on a team with all freshmen, but sometimes I don't realize that's the case."

Today's success makes Wirnsberger eager to see the future. He figures his next recruiting class will be "just as important, if not more so" than the current freshmen, and that once those classes are both on campus, the program can really start to build.

From great depths, great expectations have been born.

"If we keep at the pace we're at, there's no doubt in my mind we'll be top-15, top-10 in the country in the future," Rendos said. "We're just going to be adding people and gaining experience every day we're in the wrestling room."

Quick Takedowns
• Minnesota's victories last week over Oklahoma State and Iowa State have once again made the Gophers the national front-runners. Particularly impressive: Minnesota won both duals without Mack Reiter (133 pounds) and C.P. Schlatter (157 pounds), two starters expected to compete for All-American status. They are out with knee injuries, but are expected back later this season.

• Hofstra continued its impressive early work with a 24-10 dual meet victory over Penn State on Sunday.

Michael Rand is a staff writer for the Minneapolis Star Tribune. He can be contacted at mrand333@yahoo.com.