Baseball America takes a look back at the good and the bad from this past weekend in Three Strikes. 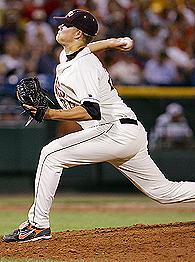 With apologies to Dennis Green, it would be premature to crown Oregon State again this early, but the Beavers were certainly impressive in a season-opening four-game sweep of Hawaii-Hilo. Granted, that's exactly what they were supposed to do against a clearly inferior Hilo team, but still, you have to give them credit for doing it, and doing it with style. Oregon State opened 2007 with a combined no-hitter of the Vulcans, led by ace right-hander Mike Stutes, who struck out seven in five innings before handing off to relievers Josh Keller, Mark Grbavac and Jorge Reyes.

But the Beavers didn't stop there, winning both games of Friday's doubleheader, by scores of 17-4 and 9-3, then taking Saturday's finale 10-2. The most encouraging thing about the sweep was the performance of OSU's starting pitchers, who cruised against Hilo's admittedly weak offense. Joe Paterson struck out seven and allowed just one unearned run in five innings in Friday's first game; Daniel Turpen struck out five and allowed just one earned run in four innings in the nightcap; and senior left-hander Anton Maxwell won his first game since April 1 by holding the Vulcans to one run over five innings while striking out five.

If Maxwell, an 11-game winner as a sophomore in 2005, can give OSU that kind of production on a regular basis this season, that pitching staff will be in great shape. We'll find out soon enough how good this staff really is, but Beavers coach Pat Casey had reason to be encouraged by his team's quick start.

"I think everybody who was on the trip for us played, which was fantastic," Casey said. "It was great to get outside for the first time; we hadn't even practiced on a field due to our [field] turf being put down, so that was good. The awareness of competition and how drastically better it's going to be is also something I'm well aware of.

"I thought we did some things well. We pitched consistently, we played defense pretty consistently, I think we made some adjustments at the plate -- that was all good. And any time you can pick up four wins on a weekend, you'll take it, but we're a long, long way from being the team that competes in the Pac-10."

Strike Two
Masterful Matusz
San Diego sophomore right-hander Brian Matusz showed exactly why he's a preseason All-American in his debut Friday night against Cal Poly. Matusz gave up just one run on two hits and no walks while striking out 13 in six brilliant innings of work as the Toreros cruised to a 9-6 win. The 13 strikeouts were a career high for Matusz and one shy of the USD school record. Matusz's duel with Cal Poly's D.J. Mauldin proved no duel at all, as USD roughed Mauldin up for five earned runs over four innings. Poly actually spotted Mauldin an early 1-0 lead on a first-inning solo home run by Grant Desme, but Matusz showed plenty of moxie by shutting down the Mustangs thereafter. It was a fine performance, but it also came against an inexperienced Cal Poly offense. This Friday, Matusz has a stiffer test against No. 4 Texas.

The Toreros, by the way, followed up their ace's gem with a 7-6 win in extra innings Saturday and a 4-1 win Sunday to complete the sweep. Like Oregon State, San Diego got solid outings from its other weekend starters in addition to its ace, as Saturday starter Josh Romanski struck out seven over five innings and Sunday starter Ricardo Pecina held the Mustangs scoreless over six innings of work. It's early, but USD looks to have enough quality arms to make waves in the West Coast Conference.

Strike Three
Take a Bow, Man
Nevada outfielder Matt Bowman could be an interesting sleeper in the Western Athletic Conference this year. Bowman powered the Wolf Pack to a 6-1 win in Sunday's rubber game of a three-game series against St. Mary's. Bowman blasted a pair of home runs and drove in three while extending his hitting streak to 10 games, dating back to last year. With a compact, 5-foot-7, 175-pound frame, Bowman has a chance to boost his chances of playing pro ball with a move to the outfield this season after playing mostly third base in 2006. He lacks the size for a corner spot in professional ball but might be athletic enough to play center and be a utility man, although the Wolf Pack played him in right field this weekend. Keep an eye on him.

Editor's note: ESPN.com has a partnership with Baseball America, which will provide weekly updates, analysis and notebooks on college baseball.