CHAMPAIGN, Ill. -- The student who had just performed Chief
Illiniwek's last dance stood in a tunnel just off the basketball
court, still in costume and grimacing to fight back tears. 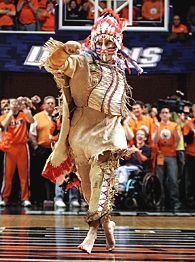 After 20 years of pressure from activists who found the
University of Illinois mascot offensive, the school did away with
Illiniwek and his antics. Dan Maloney, a graduate student who
portrays the controversial American Indian mascot, performed for
the final time in front of students and fans at a men's basketball
game Wednesday night.

"If this is the last time -- and I stress if -- I couldn't think of a better way for it to end," Maloney said.

The school's decision led the NCAA to lift sanctions that had
barred Illinois from hosting postseason sports since 2005. The NCAA
had deemed Illiniwek -- portrayed since 1926 by students who
cavorted at home football and basketball games in buckskin regalia
-- an offensive use of American Indian imagery.

But in the eyes of orange-clad students who waited outside
Assembly Hall in chilly weather for hours ahead of the game, the
decision robbed the school of a piece of its history.

Jonathan Bluenke, a junior from Crystal Lake, said Chief
Illiniwek will be missed most at football games, where Illini fans
haven't had much to cheer about the past few years.

"If we were down by like 30, people stuck around for the
chief," Bluenke said. "Honestly, that's like what you hear in the
stands."

One activist who worked to convince the university to get rid of
the chief questioned whether a mascot was integral to the
experience.

"Does having a mascot or having a flag, does it change the
devotion to the team?" asked John McKinn, a Maricopa Indian who is
assistant director of academic programming for the school's Native
American studies program. "I don't see why it would."

Neither of those ideas sit well with McKinn and others who
opposed the chief. They say they want the university to end the use
of the names.

The university hasn't said yet whether it will replace the chief
with another mascot. Board of trustees Chairman Lawrence Eppley
said last week that was a possibility, but said the impetus
wouldn't come from the board.

On Wednesday night, few fans seemed interested in a replacement.

As Chief Illiniwek took the floor for the last time, a video
montage of chiefs past played on video screens above the court.
After the halftime dance, hundreds of students and others in the
normally orange-filled arena shed their shirts to reveal black
T-shirts worn underneath, mourning the loss of the chief.

"To me the chief is spirit," said Paul Bruns, a retiree who
worked for the university for 38 years. "Why did [American
Indians] dance? They danced for spirit."