DURHAM, N.C. -- The players stood in an inflatable tunnel, waiting for their chance to run onto the field. That's when Bo Carrington knew he couldn't keep pretending this was just another game. 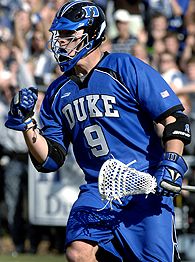 Not with all those fans waiting to welcome back the Duke lacrosse program.

"It was one of those times in athletics that you only get a couple of," the junior said. "I was trying to talk to the younger guys and say, 'Take this in. This is amazing.'"

A season lost. Three players indicted on rape charges. Nearly a year of criticism for everyone associated with Duke lacrosse. On Saturday, for a few hours, it didn't seem to matter as much. Playing their first game in 11 months, the Blue Devils beat Dartmouth 17-11 in front of a big crowd cheering their every move.

It was a triumphant return after their season was canceled last spring amid the rape allegations that touched off a debate on sports, race, class and privilege at the elite university. And it was clear this game was more than a game, from the steady stream of students who poured into Koskinen Stadium on a sunny February afternoon to the throng of reporters covering the event.

"We hadn't been out there as a team playing like that in a while, and you almost forget what it feels like," senior midfielder Dan Oppedisano said. "The big thing about today was we're back on the field and having fun. And it couldn't have been more fun. It was unbelievable."

The crowd of 6,485 fans -- a few hundred shy of the school record -- seemed to rival that typically drawn by Duke's woeful football team. The fans packed the bleachers to support a team that until last year was lost in the shadows of Mike Krzyzewski's storied basketball team.

Duke tried to make the game a special event, even bringing in that inflatable tunnel and smoke machines for the players to make a grand entrance to the field.

Even the players -- who said they were treating the game like any other earlier this week -- seemed wowed by all the attention as they ran out onto the field, jumped around and mobbed each other in a bouncing huddle.

"Just running through that tunnel and getting into that huddle before the game was just awesome," said senior attacker Matt Danowski, the son of first-year coach John Danowski. "It was one of the coolest feelings that I've ever been a part of."

In many ways, the game was aimed at giving Duke's new coach and the program a fresh start. Still, there were memories of the past year's turmoil everywhere.

Before the game, the Blue Devils wore black warmup jerseys bearing either No. 6, 13 or 45 -- the numbers of charged players David Evans, Collin Finnerty and Reade Seligmann. Rape charges were dropped against the three in December. They are still charged with sexually assaulting and kidnapping a stripper, who told police she was raped by three men in a bathroom during a team party last March.

Fans wore buttons with slogans like "Innocent until proven innocent" and "Fantastic lies" -- which is what Evans called the accusations the day he was indicted.

The absence of Finnerty and Seligmann -- Evans has since graduated -- made the return to the field a little bittersweet for Madolin Archer, mother of senior defenseman Breck Archer.

"It feels right to be back," Archer said. "They've been working toward it for so long and the interruptions certainly have prolonged things. But it's where they should be."

Danowski sensed this week that his players also had their three former teammates on their minds, something he compared to "survivor's guilt."

"It was a little bit of guys wondering, 'Why am I getting to move forward and they're not?'" the coach said. "They're very bright and very sensitive young men ... and they care."

More than 60 media credentials were issued to cover the nationally televised game, far more than the handful that might normally cover the team. And from tailgaters in the parking lot to the students filling the stands, it seemed as if everyone was wearing a "Duke lacrosse" T-shirt -- though one fan wore a shirt with a line crossed through the name of Durham County District Attorney Mike Nifong, who secured the indictments but has since recused himself after being charged with ethics violations for his handling of the case.

There were also no protesters, a common sight on campus and in Durham in the days after the accusations became public. All of which served as a reminder that the tide at Duke has turned largely in favor of the accused players.

"I think today will do a lot just getting back on the field to kind of put some of the stuff behind us," said Garrett Wood, a junior biomedical and mechanical engineering major. "Obviously the case is not over, but maybe ... if we can put that behind us and can come out and play a game, I think it'll help a lot."

While fans were not allowed to bring signs into the stadium, Duke had installed signs on the fence lining the field with the Latin phrase, "succisa virescit" -- the motto for The Delbarton School in Morristown, N.J., where Seligmann and three current Blue Devils went to high school. Adopted by the Duke lacrosse program in the preseason, it means: "When cut down, it grows back stronger."

When the game was over, the players walked off the field to applause from supporters who waited by the fence near the edge of the field.

Now the Blue Devils can treat 2007 as if it's just another season for the first time.

"It is a relief for this to be over," Danowski said. "I could feel it in my body."