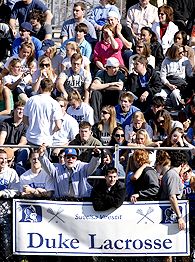 On Saturday, fans began lining up to enter Koskinen Stadium more than two hours before Duke and Dartmouth were set to take the field. By the time the gates opened, that number of media, support staff, family, friends, alumni and fans easily exceeded 425. The crowd quickly grew to 6,485, just a few hundred short of Duke's home record.

The buzz surrounding the game was closer to a North Carolina-Duke basketball game than a season opener for the sixth-ranked Blue Devils, who easily dismissed unranked Dartmouth, 17-11.

Duke lacrosse coach John Danowski, in his first game on the Blue Devils sideline, was not the only one making a debut appearance on Saturday. For the first time at a Duke lacrosse game, the pep band was there to entertain the crowd. The Duke bookstore was represented as well, and demand for the team's paraphernalia should make it a regular occurrence. The team was even sporting new uniforms.

But even though Duke lacrosse was finally taking the field after a 10-month hiatus, it was clear the team knew what -- and who -- was missing. They honored former teammate Army Sgt. James John Regan, who was killed in Iraq earlier this month at the age of 26, with a helmet decal and pregame ceremony. And the players gave a silent tribute to Collin Finnerty, David Evans and Reade Seligmann by wearing their numbers on their warmup jerseys, socks and wrists.

The crowd showed similar support for the three players accused of kidnapping and sexual assault during a March 2006 team party. Parents and friends donned buttons that read "Innocent until proven innocent" and "Fantastic lies." Others wore "Save Duke Lacrosse" T-shirts and "Free the Duke Three" stickers. And although many were worried that the game might be marred by protests or controversy, the capacity crowd heeded pregame warnings to be on its best behavior. 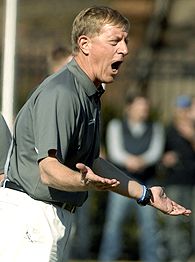 "We had the band here for the first time in my career, and the place was packed with tons of students -- it was awesome to see. We love the support. We gave out T-shirts yesterday and they were gone in no time," said preseason All-America selection Zack Greer, who finished the game with six goals.

Most students said they came to show support for the team -- one even going so far as to say he came to show his hatred for District Attorney Mike Nifong, the prosecutor who has been at the epicenter of the case. Although many students said they were fans of the team, it was clear that the high attendance was also a sign of solidarity.

"I came to support the team and show we believe in them," said Duke freshman Danielle Nathan. "Everyone said that of all the games, this was the most important."

Even Dartmouth parents were happy to see Duke back on the field.

"We're excited. I know the [Dartmouth] guys feel for the Duke guys and are happy to help them launch their season," said Laura Swiggett, mother of Dartmouth defenseman Towny Swiggett. "But of course they want to win."

"We're just happy to be here. I missed my son playing [last year]," said Trisha Danowski, mother of senior captain Matt Danowski and wife of coach John Danowski. "It's great to see them back on the field. It's time." 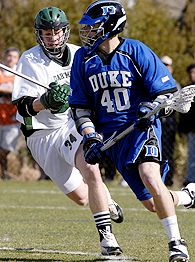 Duke gave the crowd something to cheer about early on, scoring the game's first goal. But nerves and rust got the better of the team, allowing three unanswered Dartmouth goals before the Blue Devils were able to go on a run of their own to end the first quarter tied. It took Duke another quarter before it was able to develop a rhythm. In the second half, the offensive tandem of Greer and Danowski put on a show. The duo finished with nine goals and six assists combined.

Although the convincing win was welcomed at a school that prides itself on athletic success, just returning to the field was a major milestone in the program's history. Perhaps more than most, the parents have witnessed the changing perceptions of Duke lacrosse.

"When I walked onto the plane wearing my Duke lacrosse jacket, the entire plane applauded. And I wore the Duke jacket when it wasn't as popular," said Dr. Thom Mayer, father of junior defenseman Kevin Mayer. "I think Duke has become everyone's second-favorite team.

"We knew the day this came out that there was no way [that the players were guilty]. It was a total hoax. It just took the rest of the world some time to catch up."

Although the accused players are still facing serious charges and won't be in court again until May, Saturday marked another step toward normalcy for a campus that has been embroiled in controversy for nearly a year.

Saturday's event was more than just a lacrosse game. It was another challenge for a team that's faced an unending amount of obstacles. Duke is looking forward to a time when the team just plays games. And now it is one step closer to that end.

Lauren Reynolds is the editor of ESPNU.com. She can be reached at Lauren.K.Reynolds@espn3.com.