If you happen to stumble across the most recent college baseball rankings, you will see North Carolina, which played for a national championship last season, at the top. Clemson, a team that has been to three College World Series in the last eight years, is ranked No. 2. At No. 3 is Vanderbilt. No, that's not a typo. Things have changed in Nashville and that can be attributed to one man, Tim Corbin. 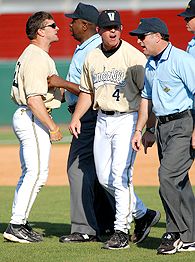 Corbin's success is hardly a surprise to most people in the college baseball world. Prior to taking over at Vanderbilt, Corbin spent eight years as an assistant coach at Clemson. Besides helping the Tigers to a 434-172 record during that time -- including two ACC titles and four trips to the CWS -- he was named Baseball America's assistant coach of the year in 2000. It was not a question of if Corbin would get a shot at a head coaching job, but when.

On June 25, 2002, Vanderbilt gave Corbin that opportunity. When the announcement was made, many people were baffled. Corbin could have gone anywhere he wanted and compete for an NCAA championship; why would he choose Vanderbilt, a program perennially at the bottom?

Yet with Corbin at the helm, Vanderbilt went from SEC doormat to kicking the door down in just a few short season.

Corbin and the Commodores have wasted little time changing people's perceptions. Since 2003, Vanderbilt has advanced to the SEC tournament's championship game twice (2004, 2006). In 2004, led by first-round draft pick Jeremy Sowers, the Commodores were two wins away from Omaha (they lost to national champion Texas). This season, the Commodores are off to a scorching 12-0 start (already beating No. 6 Rice and No. 14 Arizona State). Corbin has amassed a 106-68 record at Vanderbilt, which makes him the winningest coach in school history through three seasons.

But the question remains: Why is Corbin so successful?

Although Vanderbilt traditionally has had a hard time recruiting players, that has changed. Commodores ace David Price, a native of Murfreesboro, Tenn., was recruited by Corbin's staff out of high school.

"My brother asked me, 'Why don't you go to Vanderbilt?' I said [to him] I would never go to Vanderbilt." Price eventually said no to the draft and other schools because of Corbin. "He's a high energy guy and is good for the players. He's fun to be around and he never gets boring." 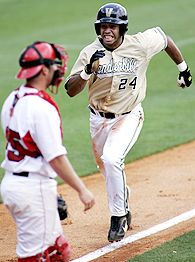 "He is one of the most passionate coaches I have ever seen. He's a winner," said Pedro Alvarez, 2006 Freshman of the Year. Alvarez set a Vanderbilt school record for home runs last season with 22. He spurned the draft because he saw what the rest of the country is finally seeing: There is a winner in Nashville.

Vanderbilt is turning into one of the premiere schools for pro talent. Of Vanderbilt's 72 players who were drafted, Corbin has coached or recruited 29 of them. Sowers has already reached the majors and is currently pitching for the Cleveland Indians. Price may be the No. 1 overall pick and Casey Weathers is a probable first-round pick in the 2007 MLB draft. Alvarez could also be a No. 1 overall pick in 2008. And there may be more; Vanderbilt's 2005 recruiting class was ranked No. 1 by Baseball America.

Widely known for having high academic standards, recruiting for Vanderbilt would scare off many coaches. But Corbin thrives in this atmosphere, focusing on getting top- notch talent who also excel in the classroom. During the team's most successful season to date (2004), 22 players earn a 3.0 GPA or better. But the Commodores get more than just the opportunity to play baseball and earn a degree prestigous university, according to his players.

"I saw how he wasn't just a coach with his players, he was a friend. He treats every kid like you are his son," said Alvarez.

Corbin has the same passion for Vanderbilt.

"When I got on campus, I was knocked over and thought to myself, 'Wow this is kind of a hidden giant,'" said Corbin.

Although SEC powerhouses like LSU and Auburn have tried to lure him away, Corbin says he has no intention of leaving Vanderbilt.

"I have always been a fan of coaches like [Penn State's Joe] Paterno and [Duke's Mike] Krzyzewski, people who have invested all their time in one school. That is something that I have always wanted to do, and you know, hopefully I can do that here," Corbin said. "There is also the comfort of where you are and knowing that you started something and you want to continue it, rather than hand it off to someone else. You want to invest your life or your time and make it as good as you possibly can."

Seth Miller is a former collegiate baseball player at Clemson. He can be reached at Seth.Miller@espn.com.