ATLANTA -- A charter bus carrying a college baseball team
from Ohio plunged off an interstate ramp early Friday and slammed
into the highway below, killing six people, injuring 29 and
scattering sports equipment across the road, authorities said.

Four people were listed in serious or critical condition as of late Saturday morning.

The university identified the victims as sophomores David Betts
and Tyler Williams; freshmen Scott Harmon and Cody Holp; bus
driver Jerome Niemeyer and his wife, Jean, all from Ohio.

Coach James Grandey and 28 players were taken to Atlanta-area
hospitals. Grandey, 29, and four players were reported in serious
or critical condition on Saturday. Many of the rest were soon
released.
The bus, carrying the team from Bluffton University, a
Mennonite-affiliated school south of Toledo, toppled off the
Northside Drive bridge on Interstate 75 in clear, pre-dawn weather,
police spokesman Joe Cobb said. 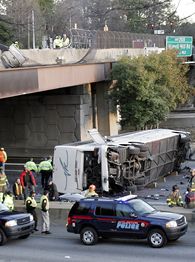 Police later said at a news conference the bus exited the interstate at "highway speed" and apparently made no attempt to stop. No skid marks were left on the pavement, meaning the brakes either were never applied or failed, police said, according to the Atlanta Journal-Constitution.

The bus crashed onto a pickup truck.

"When I saw the thing coming, I think I closed my eyes and
stepped on the gas," said Danny Lloyd, who was driving the truck
and escaped uninjured. "It looked to me like a big slab of
concrete falling down."

The impact broke his windshield, pushed his truck into the
concrete and wrecked the front bumper, said, Lloyd, 57, of
Frostburg, Md.

A.J. Ramthun, an 18-year-old second-baseman, was asleep in a
window seat when the bus hit the overpass wall, jolting him awake.

"I just looked out and saw the road coming up at me. I remember
the catcher tapping me on the head, telling me to get out because
there was gas all over."
--Bluffton second baseman A.J. Ramthun.

"I just looked out and saw the road coming up at me. I remember
the catcher tapping me on the head, telling me to get out because
there was gas all over," he told reporters.

His brother, a fellow team member, was trapped underneath the
bus and damaged his hip. "He might not recover from that,"
Ramthun said. He said his own collarbone was broken and he had to
get stitches in his face.

I heard some guys crying, "I'm stuck, I'm stuck," while the
rest of the team helped the most injured players off the bus, said
Ramthun, from Springfield, Ohio.

"It was what you'd expect out of any college team -- more
concern for others than you have about yourself," he said.

Firefighters pulled people through the roof of the bus, which
was on its side.

At Bluffton University's campus, clergy organized a campus
gathering to give students a venue to express their feelings about
the crash, said Pastor Steve Yoder with the First Mennonite Church.
Students and residents of the community wiped tears from their eyes
as they came in, and the gym was quiet with people talking muffled
voices.

"This is a profound and tragic day in the life of Bluffton
University," school President James Harder told reporters Friday
morning in Ohio.

Classes were canceled, and the school called off other sports
trips that had planned during next week's spring break, Harder
said.

"This is deeply impacting all of our students, faculty and
staff. We know these people on a first-name basis," he said. "For
now we're pulling together and supporting each other as best we
can."

"It hits home harder than it would if it had happened at a
bigger school. Everybody knows each other."
-- Bluffton assistant football coach Steve Rogers

On campus, students and residents of the community filled the
school's basketball gym to grieve together and learn more about
what had happened. Some wiped away tears as they came in. The
university, with about 1,150 students 50 miles south of Toledo, is
affiliated with the Mennonite Church USA.

The baseball team had been scheduled to play its first game of
the season in Sarasota, Fla., Saturday against Eastern Mennonite
College of Harrisonburg, Va., and it had eight more games scheduled
in Fort Myers, Fla.

Cobb said the bus was traveling southbound on I-75. He said the
bus driver may not have planned to exit the interstate, and may
have mistaken a car pool exit ramp for the regular car pool lane
that continues down the interstate.

Witnesses told the Atlanta Journal-Constitution that the bus, which exited at the Northside Drive HOV exit, appeared to lose control, crossed Northside at an angle and crashed through the bridge barrier.

When the bus went off the bridge, it landed in the southbound
lanes of the interstate, blocking all four lanes. Five fire trucks
and at least three dozen firefighters were at the scene.

There was blood on the overpass near where the bus went over.

When the bus was righted, it was clear that all the windows on
the driver's side had been shattered, and there was considerable
damage on the front of bus and on the roof above driver's seat.

Atlanta Journal-Constitution reporter Mike Morris was returning from another assignment -- a motor vehicle accident -- when he came across the accident minutes after it happened. He wrote a first-person account for the newspaper's Web site about what he saw and experienced.

"As I ran up to the bus, young men, who appeared to be in their late teens and early 20s, began to climb out of the rooftop hatch, which was only a couple of feet from the pavement since the bus had landed on its side," Morris wrote on the Web site.

As Morris and other
motorists tried to help, "Some of the injured collapsed in the roadway, while others were able to walk to the wall. Almost all were covered with blood," he wrote in his account.

"I asked one young man where they were from, and he said they were a baseball team from Ohio, heading to Florida," Morris wrote. "Then, he said, 'I'm freezing. Can you find me a blanket?'"

The charter company, Executive Coach Luxury Travel Inc., of
Ottawa in northwest Ohio, did not immediately return telephone or
e-mail messages from The Associated Press.

On campus, assistant football coach Steve Rogers said he was
working out in the weight room with members of the football team
around 6 a.m. when they saw news of the bus crash on television. He
said when they saw the markings on the side of the bus, "That's
when reality hit everybody."

They recognized the bus company as one all the school's sports
teams may have used, he said.

"Everybody was in shock. Nobody what to say or what to feel,"
he said.

His players started calling friends they knew on the baseball
team, trying to reach some by cell phone. The campus, with 1,150
students, is small enough that everyone will know someone who was
on the bus, Rogers said.

"It hits home harder than it would if it had happened at a
bigger school. Everybody knows each other," he said.

The worst part is waiting to find out who was injured and who
was killed, Rogers said.

Megan Barker, a sophomore from Bucyrus, Ohio, said she knew just
about everyone on the team and described them as "a fun-loving
group of guys."

"They live as a family," Barker said.

She said she she heard from one of her close friends on the
team, calling to say he was OK.

Terri Bauman has two sons on the school's baseball team. One was
on the bus and one, a freshman, was bumped at the last minute by a
sophomore player. Her 21-year-old son, Chris Bauman, a junior
outfielder, called from Grady Memorial to say he had been pinned
under the bus and had a gash on his leg but was otherwise OK.

"Some of their friends are hurt and some are gone, so it is
tearing him apart," Terri Bauman told The Cincinnati Enquirer.

At a chapel service the night before, students a had offered a
prayer for their sports teams and other students to travel safely
over spring break, said Katie Barrington, a junior from Brooklyn Heights,
Ohio.

"Sometimes you take that stuff for granted," she said.