The stories that make the rounds regarding Kansas senior Gary Woodland sound so grand you wonder where the truth ends and the urban legend begins. Like the one about him hitting a driver 430 yards on the practice range at the school's home course, Alvamar GC, last fall. Or how he recently went on a launch monitor where technicians measured his clubhead speed at 135 miles per hour and ball speed at 195 mph (for comparison Tiger Woods' numbers are 125 and 179, respectively). Or how this spring he has been fine-tuning a 5-wood "stinger" shot that travels 250 yards while getting no higher than 20 feet off the ground. 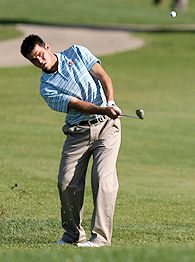 Sounds unbelievable, admits Jayhawk coach Ross Randall, only to vouch for them all -- while insisting when people tell you Woodland consistently carries drives between 330 and 350 yards off the tee they aren't exaggerating either. "Going through the ball, he's just an absolute blur," Randall said. "The thing makes a noise  it sounds like a shotgun. When he hits balls on the range, people listen, stop and then watch."

Yet what has Randall and other college observers talking these days isn't how far Woodland's drives are flying, but how close he's hitting his wedges to the pin, not to mention how frequently he's holing putts. Those help explain how Kansas' top player has won three times this season, has seven top-10s in nine starts and a 71.78 scoring average, numbers that put the 22-year-old in the hunt for national player-of-the-year honors. Not bad for a guy who hadn't committed to playing golf full time until four years ago.

Graduating from Shawnee Heights High in Topeka, in spring 2002, the three-time all-state basketball player still had an itch to play hoops, enrolling at Division II Washburn the following fall, where coaches said he could play both sports. The 6-foot-1 guard averaged six points a game in his first season before deciding it was time to turn his attention solely to golf.

"I wouldn't trade that year for anything in the world," said Woodland, who contacted Randall, the lone D-I golf coach who recruited him in high school, to see if there was a spot on the Jayhawks roster. "[But] I'd never focused on just one sport. I thought the opportunity to play golf 12 months a year would give me a chance to go where I wanted to go."

Woodland's raw talent was evident early upon his arrival in Lawrence, but he needed experience competing at the national level, having played mostly local and state tournaments as a teen. It wasn't until the 2005-06 season that his game started living up to his prodigious potential, when his stroke average dropped from 74.24 for his sophomore season to 69.87 in the fall of his junior year.

"I just haven't seen anybody physically hit the ball as far as he hits it with a regular golf swing," said noted instructor Randy Smith, who has worked with Woodland for almost two years. "[I've seen] a lot of jump-out-of-your-shoes, falling-down-break-your-back type of swings. But this is a real-life golf swing, beautifully paced."

Credit for Woodland's length goes to his athleticism -- the 195-pound workout fiend also played baseball in high school, has a solid core and strong legs providing balance for a backswing that just gets to parallel -- but his overall improvement comes from a well-defined work ethic. "He understood he still had a lot to learn in golf, and he's never balked at anything we've asked him to try," Randall said. "I think that's from playing team sports and knowing that you have to sacrifice to get better."

Smith and Randall have focused of late on Woodland's wedge play, important considering that is what he's hitting into most greens. "We've talked about how I don't want to be known as somebody who can just hit it a long way," Woodland said. This year in particular, he has stepped up when his game hasn't been its best. "He's getting better at scoring even when he's not on his game," Randall said.

To build confidence, Woodland, a sociology major set to graduate in May, has worked with equipment manufacturers to tweak his clubs to fit his swing. His driver is tipped two inches and employs the heaviest graphite shaft he can find, plus the club face is open to help promote a controlled fade off the tee.

With such a powerful swing, Woodland's biggest cause for concern is injury. At last fall's Landfall Tradition, he was on his knees prior to the final round because of pain in his back. He still managed a 76 in the final round, but gained a first-hand look at the significance of proper maintenance of his back muscles.

Regular exercise becomes particularly important too, given the unique nature of his talent. "I'm an offender because I like to show him off sometimes, but everybody and their dog is going to want to see him hit the driver," Smith said. "There are going to be people that egg him into it [when he's practicing]. He's going to hit more drivers than most people, and he's going to have to guard against that."

So long as he continues to be mentioned as a candidate for this year's U.S. Walker Cup team, Woodland is comfortable being a bit of a curiosity. "I'm not going to abandon the power game, but I'm going to be sure use it to my advantage," Woodland said.

And most likely create more stories in the process.

The Fab Five
The top five teams right now in the country:

2. Georgia
Any fears Bulldogs coach Chris Haack had last fall after his team went winless have been calmed as UGa took its second title in the last three starts at the Schenkel in Statesboro.

3. Alabama
Got to like the charge the Crimson Tide made in the final round of the Schenkel to put a little fear into Georgia. Alabama isn't going away.

Sophomore Lucas Lee has finished no worse than T-10 this spring, with wins at CS Bakersfield and the Southern Collegiate Championship.

Soon-to-be-departed Pablo Martin is out of the lineup for Austin, going to Europe to play in a pair of pro events.

The Sun Devils enjoy a nice two-week break before hosting home tournament, which they have won eight times.

Another win at the LSU/Cleveland Golf Classic, and Amanda Blumenherst looks unbeatable after taking her third straight individual title, this one by eight shot.

Still searching for win No. 2 on the year, although they are the favorites to win this weekend when they play on their home course in Athens.

Third-place finish at LSU isn't bad for Tigers considering they were on seven back of Duke.

Stat of the Week
1,1Number of schools in the Top 25 of the Golf World/Nike Golf men's coaches' poll (Wake Forest, 45-47-3) and the Golf World/NGCA women's coaches' poll (Arkansas, 42-53-1), respectively, that have losing overall records this year. In the 2007-08 season on the men's side, teams with sub-.500 records will not be eligible for at-large bids into NCAA regionals.

What to Watch For
• A foursome of current collegians (USC's Dewi-Claire Schreefel, Duke's Jennie Lee, Georgia's Taylor Leon, Arkansas' Stacy Lewis), one fall enrollee (Esther Choe at Arizona) and a precocious high schooler (U.S. Women's Amateur champion Kimberly Kim) will get to see how their games stack up with the LPGA's best when they compete at next week's Kraft Nabisco Championship, the first women's professional major of 2007. It's a talented group, all capable of making the cut at the least. Given their recent play, however, I think the players to keep an eye out for are Leon, Lewis and Choe. Leon has played in three U.S. Women's Opens, missing the cut in all, but hasn't finished worse than T-8 in any college tournament this season. Lewis is playing in her first major, but finished second in last week's Betsy Rawls Longhorn Invitational. Choe has qualified for two Women's Opens, also not making the cut, but the unflappable 17-year-old seems primed to have a breakout performance in Rancho Mirage, Calif.

• Not for nothing, but if Duke's Amanda Blumenherst had gotten a sponsor's exemption into next week's major (and seeing as she was the college player of the year in 2006, it seems a little surprising she didn't), I think she would not only have made the cut but would be in contention for the title the way she's playing of late. Remember, she did finish T-10 at the U.S. Women's Open last year.