Baseball America takes a look back at the good and the bad from the weekend in Three Strikes. 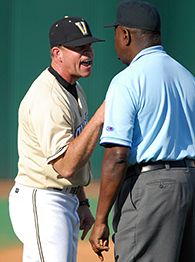 COLUMBIA, S.C. -- You won't hear it from Vanderbilt, because Tim Corbin insists it isn't in his club's character to get cocky, but somebody needs to say it: The top-ranked Commodores are sitting pretty.

Every coach in the SEC has memorized the standard line about how any team can beat any other team on any given weekend and there are no easy series in the SEC. That line might be tired, but it's also true. Still, there is an elite group of teams atop the conference, and Vanderbilt opened its SEC schedule with three straight weekends against the cream of the crop, culminating in this weekend's road series win against South Carolina. It is very impressive for the Commodores to be 5-4 in the conference after playing host to Mississippi and traveling to Arkansas and South Carolina. Weathering that stretch puts Vandy squarely in the SEC driver's seat.

"It's a long grind, but I think early in the season, the way we had our schedule line up was we had more road games than we had home, and I thought that we just had to get through this the best we can," Corbin said. "I never look at something and say, 'OK, we've got to win two of three,' or, 'We've got to win one of three,' I don't look at it that way. I just say we've got to come out and play as well as we can, put the pressure on the other team and take as many games as we possibly can. But I knew this would be a tough stretch. Last weekend was a little bit of a punch in the face, but I thought we rebounded OK in the midweek, and I thought that leaked into this weekend."

The Commodores got a solid midweek start from sophomore right-hander Brett Jacobson, who was moved out of the weekend rotation after a rough outing last weekend. That allowed Corbin to move freshman lefty Mike Minor, Vandy's top newcomer, into the Saturday starter spot. Once he got past some early nerves, Minor dominated in his first career weekend start, on the road, against the No. 1 team in the country. He finished with nine strikeouts over seven innings of work, allowing one run on five hits in Vandy's 12-1 win. Minor, a 6-foot-3 lefty with good command of his fastball and changeup, said the key was using his change early in the count against the aggressive Gamecock hitters.

"We all knew that South Carolina was just big, bulky hitters, swinging for the fence," Minor said. "The changeup is going to work every time against them. That's my specialty, my No. 1 pitch, so it works in my favor."

Minor's rapid development gives a deep Vanderbilt pitching staff one more quality arm and makes the Dores all the more dangerous in the postseason, where pitching depth is vital. Some other observations from Saturday's game in Columbia:

• South Carolina right-hander Mike Cisco appeared very, very hittable. He was around the plate for most of his short outing, but he wasn't missing any bats, and the Commodores did a nice job waiting back on his curveball. It's clear that pitching depth is what separates Vanderbilt from South Carolina right now, though that could be remedied once Arik Hempy is ready to pitch on weekends and Jay Brown gets back from forearm tenderness that has sidelined him recently. Hempy's pitch count will be increased to the 70-75 range this week, and he could be back to full strength in a few weeks.

• Vandy lefty David Price seems like a wonderful teammate. The best pitcher in America was the most vocal player in the Vandy dugout Saturday and the first one out to congratulate his teammates each time one of them scored a run or made a successful sacrifice.

• It sounds like Casey Weathers was the most impressive performer of the weekend, striking out seven over 4 1/3 scoreless innings of relief in Friday's 12-inning classic. Weathers pitched in the 94-98 mph range with his fastball and located his slider well.

Strike Two
Tigers Tamed By Canes
After catching Saturday's showdown in Columbia, I spent a rainy Sunday afternoon at beautiful Doug Kingsmore Stadium in Clemson, where two of the top three teams in the preseason rankings were in desperate need of a win. Miami's early ACC schedule did it no favors, with road trips against North Carolina, Virginia and Clemson (and a tough home series against Maryland mixed in). The Hurricanes went just 1-5 against the Tar Heels and Cavaliers and split the first two games against Clemson, which was trying to bounce back after dropping a conference series at Maryland a week earlier. Miami trailed 5-4 heading into an hour and a half-long rain delay after the sixth inning, but Clemson opted to leave freshman reliever Matt Zoltak in the game after play resumed in the seventh, and the Canes proceeded to load the bases with no outs. The Tigers then brought in All-American closer Daniel Moskos who nearly got out of the jam unscathed, inducing a 1-2-3 double play. The next batter, pinch-hitter Gus Menendez, delivered a two-run double that gave Miami the lead for good.

The win was huge for Miami, which now sits at 5-7 in the ACC with all of its most difficult road trips in the rear-view mirror. The Hurricanes will play host to Georgia Tech and North Carolina State the next two weeks, and Florida State comes to town the last weekend of April. Miami managed to come up with the big road win despite the absence of All-American second baseman Jemile Weeks, who was at home nursing a strained leg muscle. Miami has the luxury of sliding senior infielder Roger Tomas to second base in Weeks' absence, ensuring that at least the defense remains solid up the middle. Meanwhile, the Miami pitching staff is starting to come around; the weekend rotation of Eric Erickson, Scott Maine and Enrique Garcia seems solid, and senior Danny Gil appears to be the solution in the closer spot. He threw 3 2/3 strong innings of relief Sunday.

For Clemson, it's just a matter of the bats coming around. Neither P.J. Zocchi nor David Kopp had great starts this weekend, but that rotation is solid, led by sophomore lefty Ryan Hinson. And the bullpen is a strength as well, with Moskos anchoring a strong group that also includes righties Stephen Clyne (3-0, 0.41 in 12 appearances), D.J. Mitchell and Alan Farina. Losing junior shortstop Stan Widmann for the year was a major blow, particularly offensively. Second baseman Taylor Harbin slid over to short and does a fine job defensively, but that forces freshman J.D. Burgess into the lineup at second, and he continues to struggle at the plate (.237). The Tigers are also counting on key contributions from outfielders Addison Johnson (.238) and Wilson Boyd (.217), and neither really has produced. And slugging first baseman Andy D'Alessio left Sunday's game with an apparent groin injury, which will hurt the Tigers if he misses an extended stretch.

Strike Three
Arizona's Strong Statement
Not only did Arizona sweep defending national champion Oregon State this weekend, the Wildcats did it by pounding an OSU weekend rotation that had allowed just 2.7 runs per game entering the weekend. Neither Mike Stutes nor Joe Paterson nor Daniel Turpen made it through five innings this weekend, while Arizona got strong starts from ace Preston Guilmet and senior lefty Brad Mills, who might have the best stuff on the Wildcats' staff and is finally putting it all together. With power arms like Daniel Schlereth and Jason Stoffel in the bullpen, Arizona should be in good shape off the mound, and the lineup is dangerous, thanks in part to boosts from transfers C.J. Ziegler (.350 with seven homers) and Diallo Fon (.349). The Wildcats have more pitching than Arizona State and look to have a better offense than Oregon State, making them the most balanced team in the Pac-10. Arizona might be the darkhorse favorite to win the conference.

Editor's note: ESPN.com has a partnership with Baseball America, which will provide weekly updates, analysis and notebooks on college baseball.