The 2007 Frozen Four was a sight to behold Thursday afternoon and evening. Playing to nearly 19,000 fans in the Show-Me State, college hockey did that and more as Michigan State and Boston College survived their semifinal tests and will now meet Saturday night (ESPN, 7 p.m. ET) to decide the national championship. 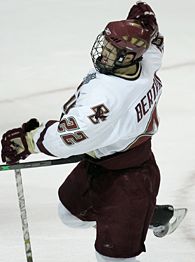 How they got there were two very different stories.

Ladies and gentlemen please
Would you bring your attention to me?
For a feast for your eyes to see
An explosion of catastrophe

The afternoon couldn't have started much worse for Michigan State.

Before many fans had found their seats for the matinee at the Scottrade Center, Maine had jumped out to a lead on the first shot of the game.

Josh Soares fired a pass from behind the net and found a wide open Keith Johnson in the slot. He one-timed a shot that beat Michigan State goalie Jeff Lerg to the stick side just 23 seconds in.

"Everybody just looked around and said, 'Wow, what just happened?'" defenseman Chris Snavely said. "It was an eye-opener, but the guys came back and battled hard.

"This just shows the character of this team."

The Spartans (25-13-3) recovered from their horrible start to score four unanswered goals and post a 4-2 win to advance to their first national title game since 1987.

Make no mistake, the first game was entertaining.

But it was the opening act to a headliner that stole the show.

Thursday night marked the sixth time in the last nine years that the Eagles and Fighting Sioux have met in the NCAA Tournament -- including four times in the Frozen Four.

"That's what builds rivalries," BC head coach Jerry York said. "It's hard to have rivalries outside your league, but when you play as many times as we have  and we've had some classic games."