STANFORD, Calif. -- There was a moment. Tom Davis will allow that much. There was a moment, driving through the Sierra Nevada mountain range from the San Francisco Bay Area to Reno, when the man looked over at the passenger in his car, at his son with the surgically repaired face and the love of baseball, and wondered whether he was doing the right thing as a father. 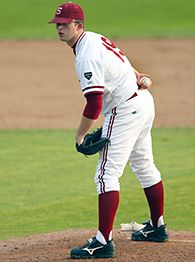 Erik Davis, though, never wondered, and that's pretty much the story here. It explains why, despite his father's trepidation that day last summer, Davis arrived in Reno and promptly climbed onto the pitcher's mound in a semipro game just two months after taking a line drive to the face in a horrifying, bloody scene in the Cape Cod Baseball League. It explains how he got through two operations, the insertion of the titanium plates to replace his broken orbital socket and cheekbone, and that nerve-jangling trip to Reno to learn whether he still could be the player he wanted to be.

It explains, at least a little, why Davis has been far and away Stanford's best pitcher down the stretch of a difficult college baseball season. The right-hander with pro-style stuff seems to rise and become better as the situation around the team has become less hopeful.

And it certainly explains why Davis feels so little need to expound upon any of it.

"The only thing that's different is that I have a pretty cool story to tell," he says. "Other than that, I feel like everything's pretty much the same."

Just as the man would have it.

Davis' reclamation of his own competitive life as a pitcher is the bright spot in an otherwise uncharacteristically unhappy Stanford season. The Cardinal (24-28) would have to win out -- including a sweep this weekend at USC -- to avoid posting a losing record for only the second time in Mark Marquess' 31 seasons as head coach. Chief among the problems: The pitching staff has been wildly ineffective, posting a team ERA of 6.07, dead last in the Pac-10 Conference.

"The hard part is that we older guys on the team have not set a better example than we have," says Davis, a junior. "Stanford has always been about winning a lot of games, and I remember as a freshman that the older guys made it clear we were expected to win. We looked at it the same way this year, but we just didn't get the job done."

Davis himself, though, is going the other way. His seven innings of five-hit ball against Pacific last weekend lowered his ERA to 3.86 and emphatically marked him as the Cardinal's most effective pitcher. That has been particularly the case since Marquess moved him out of the bullpen and into the rotation, where Davis (4-2) has allowed three or fewer earned runs in four of his five starts.

"He has been our best pitcher lately, no question," says Marquess. "Really, though, he has grown each year as a player and a person. This whole thing just kind of matured him more quickly. He's much more dedicated -- to baseball and everything else."

And all of that underscores the small miracle here, which is Erik Davis, still just 20, getting back his athletic life at all.

Davis remembers every step of that journey, including the incident that made it necessary. He vividly remembers throwing the pitch last June 18 in Massachusetts that Vanderbilt infielder Ryan Flaherty lined right back at him, remembers trying to get a glove up in time to deflect the missile headed for his face. He remembers going down, and Stanford teammate Brian Juhl -- coincidentally the on-deck hitter for the team playing against Davis that day -- rushing to the mound, the first to reach him as he lay with blood gushing from his face. There was the ambulance ride and medevac from Cape Cod into Boston, the uncertain first few hours.

"Long-term danger was the thing I was first worried about, because I couldn't see out of my right eye," Davis says. "It took about a day before I could see out of it again, and then it was just shadows and things."

He is just kind of a bull-headed, tough-minded guy. At one point after the surgeries, when we were back home, I asked if he wanted to visit with a sports psychologist about everything that had happened. He said, 'No. Why would I want to do that?'

By then, his mother, Gloria, had flown in from the family's home in Mountain View, Calif., just a few miles from the Stanford campus, to be with him. Doctors at Massachusetts General Hospital in Boston scheduled surgery the day after the incident -- "Coach Marquess may have called the hospital more times than I did," Tom Davis says with a light chuckle -- and determined that the vision issue was non-threatening, that the swelling was due mostly to blood rushing to the area of the injury.

A five-hour procedure on June 30 inserted four titanium plates to replace Davis' shattered facial bones. Not long after, Davis, after receiving calls of encouragement from the likes of Mark Prior and Nolan Ryan, went home.

By Aug. 18, exactly two months out from his dark moment, Erik Davis was back on the mound. And even if no one was terribly surprised by Davis's desire to pitch again ("It was the first thing he talked about when we got on the phone, when he was still lying in his hospital bed," says Marquess), his father had his share of second thoughts.

"He is just kind of a bull-headed, tough-minded guy," Tom Davis says of Erik, the second of six children in the family. "At one point after the surgeries, when we were back home, I asked if he wanted to visit with a sports psychologist about everything that had happened. He said, 'No. Why would I want to do that?'

"But that day, we were about two hours before game time in Reno and I thought, 'Geez, as a dad am I doing the right thing?' I asked Erik if he was ready for this. He said, 'I am absolutely ready for this.'"

And so he was. Davis walked the first batter he faced and fell behind the second hitter 2-0, but he found his curveball in time to induce a groundout, and went on to pitch three hitless innings. When he returned to the Stanford campus last fall, Davis felt he had come back as a player and a person.

It hasn't been an entirely smooth road. Davis pitched beautifully in the fall, then suddenly fell off in early spring, his fastball dropping from its normal 90-91 mph down to 84. Neither Marquess nor the Stanford coaching staff saw anything mechanical. Tom Davis, in retrospect, thinks the passing of Davis' grandmother might have contributed to an overall funk, as it coincided with some of his poorest outings. Some psychological fallout from the Cape Cod incident would seem a reasonable enough explanation. But no one knows for sure, including Davis, who says he simply seemed to lose confidence in his fastball.

"Instead of going out there and thinking about getting hitters out, I was worrying about what I was doing wrong," Davis says. "And instead of throwing the ball, I was just trying to get a strike. I finally just decided to go out there and throw it -- and that's when I got my velocity back and started locating my pitches again."

All of that coincided roughly with Marquess' decision to give Davis some starts, so that he didn't feel the reliever's pressure to be perfect with every pitch. The results have been mostly stellar. Now both Marquess and Davis look forward to the likelihood of Davis being a solid pick in the June pro baseball draft -- a career fully reclaimed.

"He has always been a pro-type pitcher," Marquess says. "I'm sure he'll get drafted -- and where he goes doesn't really matter. Just to be able to be of that ability, to come back the way he has, speaks volumes to the kind of competitor he is."