BALTIMORE -- Hard to believe it was just two years ago that Johns Hopkins beat Duke for the national title.

And that was before both the Blue Devils and Blue Jays learned to lean on each other to succeed.

Now, Duke and Johns Hopkins meet once again for the NCAA lacrosse national championship on Monday (ESPN, 1 p.m. ET). The past is not forgotten. It can't and won't be anytime soon. But both teams have somehow become better because of it.

"You like to say [the past] doesn't matter, but it does. But it's not the off-the-field stuff that made this possible. It's the fact we stayed together like a team," said Duke junior Zack Greer, who scored four goals in Duke's 12-11 semifinal win over Cornell. "It's the 6 a.m. fall workouts. It's going out on the field with a new coach, new offensive schemes, a new defense. All the players went through it and we bonded.

Still, it was a family under fire for well over a year. There were constant stories, speculation and suspicion. Despite the Blue Devils' success on the field -- they went 17-2 fueled by a pair of the country's best players in Greer and Matt Danowski and play an aggressive style that managed to turn casual fans here into Blue Devils backers -- they are better known for what happened off the field.

But coach John Danowski says the success on the field coincides with what happened off the field.

It's pretty real when you're 4-4. When you're winning one-goal games, it's nerve-wracking. You're going into overtime or defending with 10 seconds left as they go for the go-ahead goal, you see your season flash before your eyes. One more goal, one wrong bounce and the season is over.

"Can't do one without the other," he said. "The [past] is always there on a daily basis. Maybe it's in the paper one day or on TV the other, but it's always something. And we dealt with it and it's not an excuse one way or the other. We made slogans like 'Adjust, Adapt, Overcome' and 'Don't sweat the little stuff.' You try to deal with it as best you can.

"But we're not going to win because we went through something, no matter how horrific. We have to get up at 6 a.m. and workout, and we have to run end lines if we scoop with one hand. You have to do the work. It doesn't matter if we went through a heinous and difficult time, it's not going to make us a good lacrosse team."

So just how good is Duke? Good enough to send Johns Hopkins on the verge of a nervous breakdown. That was where the Blue Jays were in late March, fresh off two straight losses and a closed-door, self-help session. No coaches were invited and no suggestion was ignored.

"We talked about what to do, how to stop the bleeding and how to save the season. Then we lost to Duke by two," said senior Stephen Peyser, who scored three goals in JHU's 8-3 semifinal win over Delaware. "We played better, but  "

So they closed the door and opened up -- again. It was part counseling, part scared straight session. 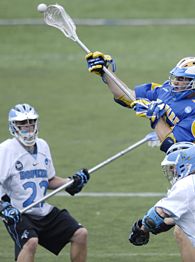 "We were 4-4 in the middle of the season and everyone was writing us off," said goalie Jesse Schwartzman, a Baltimore native who had 24 family members watching the game Saturday. "We were talking about how we didn't want to be the team that ended the streak of making the playoffs.

Sure, it didn't seem real. This was the most impressive streak short of Bob Barker on the "Price is Right", but here were the Blue Jays huddled in a room in a collective group hug.

"It's pretty real when you're 4-4," Peyser said. "When you're winning one-goal games, it's nerve-wracking. You're going into overtime or defending with 10 seconds left as they go for the go-ahead goal, you see your season flash before your eyes. One more goal, one wrong bounce and the season is over."

But a funny thing happened as the Blue Jays were being written off as a shell of the former great Hopkins teams. They started winning. A huge overtime win at Maryland started what is now an eight-game winning streak. No longer are they worried about being another dubious footnote in the Hopkins media guide. Instead, they have a chance to secure their second title in three years.

"As seniors, we were here for the end of some streaks and that's not a good thing," said Schwartzman, was the Most Outstanding Player when JHU won the title in 2005. "Sitting home on Memorial Day as a lacrosse player is not a good feeling."

No matter the outcome, playing for a national championship again will be a pretty good feeling for both Duke and Johns Hopkins. A feeling both have earned.

Joe Wojciechowski is an NFL editor at ESPN.com.