This week, ESPN.com is featuring a few of the best non-NCAA-sanctioned programs in the country.

When Superfly -- Stanford's women's ultimate Frisbee team -- takes the field, it does so wearing brand-sponsored, players association-approved uniforms. The team's threads, it should be noted, are not tie-dyed. 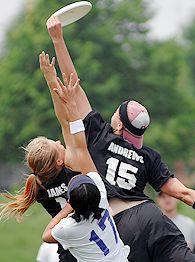 Win by win, title by title, Superfly has been smashing the competition in collegiate ultimate for the past decade. And along the way to an incredible seven championships in 11 years -- the team's victory at the Ultimate Players Association College Championships in May was its third straight -- these dynamos of the disc have attempted to squash their sport's stereotypes.

"People often ask, 'Do dogs play?'" said Alicia Dantzker, a recently graduated co-captain on the 2007 squad. "'Do we all play stoned? Do we all wear tie-dyed shirts?'

"I don't know what to say about the stereotypes other than they do exist, but they don't have a lot to do with what ultimate is at this point."

In other words, Frisbees that were formerly flung as part of impromptu games in the parking lots of Phish concerts have flown into a rarely traversed realm of the competitive cosmos. According to the Ultimate Players Association, about 10,000 students actively participate in the sport at the collegiate level and more than 100,000 Americans play the game overall.

How serious is it? At Stanford, ultimate is sunrise sprints serious.

"It is really sort of inspiring and hard," Dantzker said. "It's a good way to focus and get excited about the sport. When you get up at 7 o'clock and sprint for an hour and a half, after doing that you feel pretty intense."

And those 7 a.m. sprints are only part of the team's offseason regimen.

From the beginning of the school year until the ultimate season begins in February, the members of Superfly act as their own strength coaches, lifting weights at Stanford's recreation center several times during the week; recruiting coordinators, channeling their enthusiasm to sell a new batch of freshman talent on joining an unfamiliar sport; and fundraisers, volunteering to work for the university and writing letters to donors who might contribute to the team's operating budget of more than $30,000.