This week, ESPN.com is looking at a number of great, under-the-radar college sports rivalries. These rivalries often are overshadowed by their big league brethren -- such as Michigan-Ohio State football or Duke-North Carolina basketball -- but are no less intense. This is a small sampling of some of the nation's best rivalries, regardless of sport and division. If you have an under-the-radar rivalry story you'd like to share, tell us about it here. We'll post a few of the best stories Friday.

Kobe Bryant could put up that number by himself, in one game. But through 166 matchups, 55 points (or .331 points per game) is all that separates Hope and Calvin, two Division III schools in western Michigan who began playing basketball against each other in the 1920s. 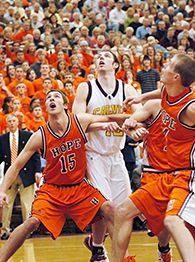 It comes as no surprise that the 166 games are split down the middle, with each team garnering 83 wins.

Hope had a basketball team first. According to Calvin coach Kevin Vande Streek, a few Calvin students decided to go play Hope one day, and it has taken off since then.

While the rivalry began across all sports, it has grown into a national event in men's basketball. Much of that is due to the teams' success, particularly in the past three decades. Much more than bragging rights is on line when the teams meet.

"What's really unique to the Hope-Calvin game is that you don't need other things," said Dr. Jim Timmer Jr., Calvin's men's athletic director. "I don't think there's a lot of gimmicks that go along with it. It's usually played for the championship, so you don't need to have traditions that are man-made or false. It's a good, clean, hard-fought rivalry."

Calvin and Hope have combined to win 59 of the 110 men's basketball championships in the Michigan Intercollegiate Athletic Conference, the nation's oldest collegiate conference. They have met seven times in the MIAA tournament since it began in 1992. Hope is 4-0 against Calvin in the final.

Calvin, however, holds an edge in the NCAA Tournament. The teams have met six times in the NCAA playoffs, with Calvin winning four -- including overtime thrillers in 1987 and 1991.

"You can go down the ages of great games that have been played between the two schools, and I think both schools would admit that when one team wins a championship and the other one knocks them out of the NCAA Tournament, or one teams wins the championship and the other beats them in the conference tournament, those are all great memories for both schools," said Timmer, who was Calvin's starting point guard in the 1980s, and the son of a Calvin coach. "There's years and years of last-second shots and tip-ins."

The great games have attracted a following not just in the community, but across the nation. The game annually attracts a sellout crowd of thousands -- double what each school attracts for a non-rivalry game. The Jan. 29, 1997, game at Van Andel Arena in downtown Grand Rapids established an NCAA Division III single-game attendance record with a capacity crowd of 11,442. It's broadcast on TV and the Internet, so fans all over the world can take part, no matter where they are.

I don't think there's a lot of gimmicks that go along with it. It's usually played for the championship, so you don't need to have traditions that are man-made or false. It's a good, clean, hard-fought rivalry.

"It's the closest thing to Duke-Carolina as you can imagine, at a small level proportionally," Timmer said. "It's the whole community. Everyone is going to tune into western Michigan for those two or three games a year."

"I don't think there's any question that this is the biggest small college rivalry," Vande Streek added. "It is excellent small college basketball. The attendance is phenomenal. [In western Michigan], you're on one side of the rivalry or the other.

"At church, I teach students who go to Hope -- I even had one girl pass a note to me during church that said, 'Go Hope,'" Vande Streek said, laughing. "I don't know that there's a rivalry of this magnitude at this level even close to this anywhere in country."

This rivalry is also unique in the approach both fans and players take to the game. While everyone is excited for tip-off, the rivalry doesn't carry the animosity that's usually found when two schools compete so closely for so long.

"Calvin-Hope is a lot of fun. But it's not like big-time Division I schools, where there's a lot of hatred toward their rival," Vande Streek explained. "Hey, I want to beat Hope. But I have a lot of respect for what they're doing. When we're out recruiting, [the coaches of both schools] sit together. We see each other at clinics and we recruit a lot of the same players. The players are usually high school teammates. They stand up in each other's weddings, play together on summer league teams.

"There is a lot of respect for what the two schools are trying to do -- prepare young men for service in Christ's kingdom and out in the world."

Timmer echoed Vande Streek's statements: "As a player, it's the best experience I've had in sports. The crowd is into it, they've been great games. If everyone could play in a rivalry game like Hope and Calvin, or Duke-North Carolina -- they are just fun experiences."

Lauren Reynolds is the editor of ESPNU.com. She can be reached at Lauren.K.Reynolds@espn3.com.