It should not come as a surprise when Nebraska volleyball is ranked No. 1 in the preseason by anyone who takes the time to publish a poll.

The defending national champions have been at the top of the American Volleyball Coaches Association preseason top 25 each of the past two seasons and have been ranked No. 1 in 31 of the last 32 polls. 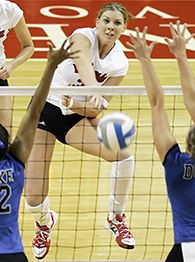 The No. 1 team in the AVCA preseason poll has gone on to win the national championship nine times. If the Huskers go on to win it all in 2007, they would become the sixth program to win back-to-back championships, but the first one east of the Rocky Mountains to do so.

The good news for their opponents is championships are not handed out based on a program's history. The bad news is this year's edition of the Nebraska volleyball team could arguably be its best.

The Huskers return four All-American starters from last season, including senior right side hitter Sarah Pavan, the 2007 AVCA Division I Player of the Year. She averaged 5.99 points and 5.10 kills per game for a team loaded with offensive options.

Like Pavan, junior outside hitter Jordan Larson was a first-team selection. Senior middle blocker Tracy Stalls was named to the second team, while redshirt sophomore setter Rachel Holloway earned a spot on the third team.

Two Huskers finished their careers as champions -- outside hitter Dani Mancuso and libero Dani Busboom, who averaged 2.92 points and 5.04 digs per game, respectively. But those voids will be filled by the return of senior outside hitter Christina Houghtelling, the 2005 AVCA Division I Player of the Year, who missed last season with a shoulder injury.

Houghtelling had a breakout year in 2005 when she ranked among the team leaders in kills, service aces, digs and blocks. She played in all 116 games and finished second to Pavan by averaging 4.44 points per game.

The Huskers also had another top-five recruiting class, which features outside hitter Tara Mueller, who helped lead the U.S. Junior team to a fourth-place finish at the U-20 World Championships in Thailand.

Nebraska's title defense begins on Aug. 24 with the AVCA Showcase at the Qwest Center Omaha, the court where the team won the national championship last December. But before Husker Nation begins planning its next celebration, it's worth taking a look at five teams that could pose a threat to NU in 2007.

Florida
Could this be the year coach Mary Wise and the Gators finally win a volleyball championship?

No other program without an NCAA crown has been nearly as dominant during the regular season and the early rounds of the tournament. Under Wise's direction, the Gators have won 16 consecutive Southeastern Conference regular-season titles, posted a 44-16 postseason record and advanced to the national semifinals seven times.

While Florida has been good, its tournament opponents have been great. The Gators have been eliminated by the eventual national champion five times, the runner-up five times and a semifinalist four times. Those teams featured players like Danielle Scott (Long Beach State, 1993), Misty May (LBSU, 1998) and Keao Burdine (USC, 2002 and '03).

The veteran Gators will be led by senior setter Angie McGinnis, a first-team All-American and the first setter in SEC history to be named player of the year. Her primary options are senior opposite hitter Amber McCray, a second-team All-American, senior middle blocker Kisya Killingsworth and senior outside hitter Marcie Hampton.

With all of its starters returning, Florida has the talent and experience to make a long run in the tournament, especially since it will host a regional at the O'Connell Center.

Penn State
Any program that wins four consecutive Big Ten titles is a serious threat to win the national championship. And the Nittany Lions will have four All-Americans among the six starters and 11 letter winners returning from the team that posted a 32-3 record and advanced to the regional final last season.

Penn State features one of the most dominant front rows in the country with junior Nicole Fawcett and sophomore Megan Hodge at outside hitter, and senior Melissa Walbridge and junior Christa Harmotto in the middle. In the final 2006 statistics, the Nittany Lions were ranked No. 1 in hitting percentage, No. 2 in blocks and No. 12 in kills per game.

Hodge led PSU by averaging 4.83 kills per game and followed in Fawcett's footsteps by being named the AVCA National Freshman of the Year. She also became the first ever freshman to be named Big Ten Player of the Year. Harmotto finished 10th in the nation with a .404 hitting percentage and 14th by averaging 1.58 blocks per game, one spot ahead of Walbridge, who averaged 1.57 blocks.

The one position Penn State will have to fill is opposite hitter, where Cassy Salyer was lost to graduation. Redshirt freshman Blair Brown, a two-time Virginia Gatorade Player of the Year and member of the 2004 USA Youth National Team that won the NORCECA Championship in Puerto Rico, could be a dominant player on the right side.

Penn State will host a regional at Rec Hall.

Stanford
The Cardinal will be motivated after falling to Nebraska in last year's championship match. Stanford took Game 1, but couldn't prevent the Huskers from winning the final three games. With six starters returning, the Cardinal are a logical selection to earn their record 17th Final Four appearance.

Three All-Americans -- junior middle blocker Foluke Akinradewo, junior outside hitter Cynthia Barboza and senior setter Bryn Kehoe -- will try to lead Stanford back to the title match for the fifth time in seven seasons. Akinradewo and Barboza both played for the U.S. National Team at the Pan American Games this summer.

The Cardinal also could benefit from the arrival of the nation's top-ranked recruiting class, which includes 6-foot-4 outside hitter Alix Klineman and 6-foot-5 middle blocker Stephanie Browne. Klineman, the No. 1 recruit in the nation, has the potential to follow in the footsteps of Stanford's four-time first-team All-Americans Bev Oden, Kerri Walsh and Logan Tom. Klineman averaged 4.88 points and 3.88 kills per game while leading the United States to the gold medal at the 2006 NORCECA Continental Women's Junior Championship.

Stanford will have the luxury of playing in front of a supportive crowd in the later rounds of the NCAA Tournament. The Cardinal will play host to a regional at Maples Pavilion, and if they advance to the Final Four, play less than two hours from The Farm at ARCO Arena in Sacramento, Calif.

Texas
Texas is in a unique position: It may be easier for the Horns to win a national championship than a conference championship. While not conceding a 12th consecutive Big 12 title to Nebraska, the Longhorns would reluctantly admit the odds of outplaying the 2007 Huskers are better in a single postseason match than over the course of the conference schedule.

Six starters are back from last year's team (which lost to Stanford in a regional final), led by senior All-American setter Michelle Moriarty. The Longhorns have a pair of sophomores who earned All-American honors last season -- opposite hitter Ashley Engle and outside hitter Destiny Hooker. UT also will benefit from the return of All-American outside hitter Brandy Magee, who was injured in last year's season opener.

For the second year in a row, coach Jerritt Elliott has brought in a stellar recruiting class that will add size and talent on the front row. The second-ranked class includes 6-foot-2 outside hitter Juliann Faucette and a versatile 6-foot-5 player in Jennifer Doris, the No. 2 and 3 recruits in the country.

USC
It's no exaggeration to claim that this summer the Women of Troy proved to the world they are title contenders. Competing against national teams from Hungary, Slovakia, Sweden and Switzerland, the Trojans took second place in the 32nd Savaria Cup in Hungary. That tied the tournament record for the best finish by a non-national team.

USC opened the tournament with a 3-0 victory over Slovakia, one of 16 teams that is already qualified for the 2007 European Championships. The Slovaks were considered one of the teams to beat in the Savaria Cup. The Trojans' only loss in the tournament was in five games to tournament champion Hungary. Senior opposite hitter Asia Kaczor was named to the All-Tournament team.

Kaczor and senior outside hitter Diane Copenhagen are two of six starters returning for the Women of Troy. The duo combined for more than half of the team's kills last season. The offense will be directed by sophomore setter Taylor Carico, the Pac-10 and AVCA West Region Freshman of the Year. Carico went the extra mile this summer by also competing for the U.S. Junior National Team in the FIVB U-20 World Championships in Thailand.

Dave Reed has covered college volleyball for national publications since 1996.