Brandon Jennings is in chill mode these days. Less than a week before he heads back East to begin his senior year at national powerhouse Oak Hill Academy in Mouth of Wilson, Va., Jennings is resting at his Temecula, Calif., home. 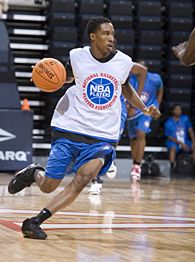 Jennings has earned a respite after traversing the country on his swan song tour of the summertime basketball circuit. He's spending quality time with his family and girlfriend, and is back in a comfort zone.

But don't expect the 6-foot-3, 165-pound point guard to rest on his laurels.
After being tabbed the top-ranked player in the ESPN 150, Jennings realizes "there's a bull's-eye on my back, so I have to step up my game and keep playing hard."

And that's precisely what vaulted Jennings, who previously attended Dominguez High in Compton, Calif., for two years, to elite status in the Class of 2008.

"Everyone talks about his offensive skills and flair on the court, but it is his vocal presence which pushes teammates and makes them better," Bob Gibbons of Scouts, Inc. said. "He's comparable to Kenny Anderson [Class of 1989]. Both are left-handed and are unstoppable going to the basket."

"He was clearly the player of the summer," Gibbons said.

"I held my own this summer," Jennings said, joking.

Jennings grew up in a hardscrabble neighborhood in Compton. He honed his game at Rowley Park in nearby Gardena. When he was 5 years old, Jennings played against older players and quickly lapped the competition.

Jennings remains tight with the New Jersey Nets' Marcus Williams, a family friend and a Los Angeles native. Prior to the Reebok Summer Classic, Jennings spent time with his "older brother" in New Jersey.

How did the workouts go?

"Let's just say he kicked my butt up and down the court," Jennings said. "Marcus told me to keep working hard and never be satisfied. Some of the things he showed me were passed down to him by Jason Kidd."

Last week, Jennings was named co-MVP (along with Tyreke Evans of Philadelphia) for the second consecutive year at the Boost Mobile Elite 24 Classic, an all-star game at the legendary Rucker Park court in Harlem. The game, which was established last year, is quickly becoming a summertime classic, and Jennings earned the respect of the basketball-savvy New Yorkers after dishing out a game-record 23 assists and scoring 19 points as "The Goat Squad" outlasted the "Skip to My Lou Squad," 169-164. 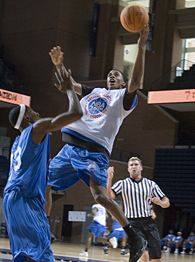 "That was a great way to end the summer," Jennings said. "During the school year, we play a structured style, but at the Elite 24, it was freestyle. We were there to entertain and we didn't disappoint."

As a junior, Jennings helped Oak Hill finish 40-1 and claim the No. 1 ranking from several national media outlets. He averaged the rare double-double, 15.2 points and 11.5 assists, and brought several intangibles to the court.

"Brandon's a natural," Smith said. "His knowledge and understanding of the game is uncanny. He's a pass-first point guard, who instinctively knows when he needs to deliver the ball to a particular player.

"I don't know any high school player who can stay in front of him. He can play any style and likes to put on a show."

Gibbons says Jennings was the catalyst of a great team featuring several Division I players.

"[The decision] was too early," Jennings said. "I needed to visit schools, and I learned from it."

Jennings reconsidered his college choice after feeling misled about USC's recruitment of other point guards; the Trojans signed point guard Angelo Johnson as part of their 2007 class.

In May, Jennings called the Arizona coaching staff with his final answer. He was mainly sold on Arizona "because players graduate" and an all-star coaching staff led by Hall of Famer Lute Olson.

"Besides Coach Olson, there's Coach [Kevin] O'Neill, who has NBA experience and is considered one of the best teachers of defense. Josh Pastner is so positive and the primary coach I dealt with during the recruiting process, and Miles Simon, one of Arizona's great guards."

Jennings knows Arizona's guard legacy is rich with players such as Gilbert Arenas, Steve Kerr, Damon Stoudamire, Mike Bibby and Jason Terry. To join the list, Jennings knows he must maintain his selfless demeanor and continue to challenge himself against high-level competition.

According to Gibbons, Jennings is the centerpiece of Arizona's No. 2-ranked recruiting class, with four players in the ESPN 150. Pac-10 rival UCLA currently has the No. 1 class.

"Arizona is a perfect fit [for Jennings]," Gibbons said. "Lute will build the team around him."

Jennings is joined in the Wildcats' class by 6-foot-7 forward Emmanuel Negedu (ranked 13th) of Brewster Academy in Wolfeboro, N.H.; 7-0 center Jeff Withey (No. 37) of Horizon in San Diego; and 6-4 guard Brendan Lavender (No. 89) of Mountain View in Mesa, Ariz.

Players cannot sign their binding national letters of intent until the early signing period in November.

Christopher Lawlor has covered high school sports for more than 20 years, most recently with USA TODAY, where he was the head preps writer responsible for national high school rankings in football, baseball and boys and girls basketball. He also for worked for Scholastic Coach magazine, where he ran the Gatorade national player of the year program for nine years. Lawlor, a New Jersey resident, grew up in Rochester, N.Y. and is a graduate of St. Bonaventure University.